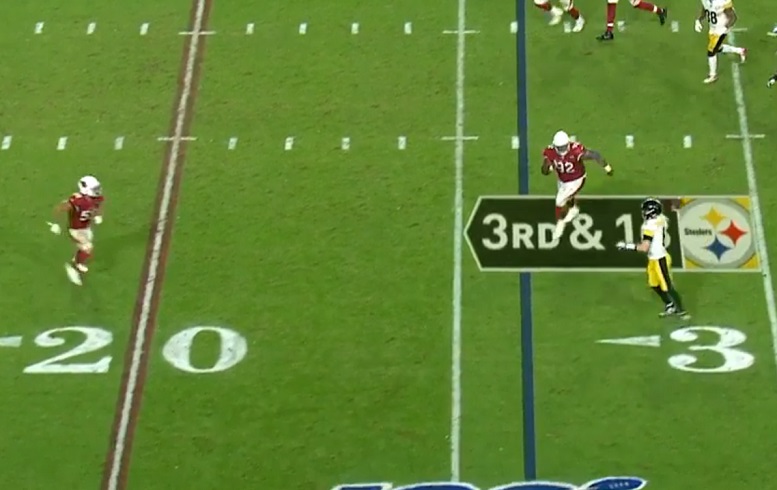 While Pittsburgh Steelers quarterback Devlin Hodges did complete 16 of his 19 total pass attempts on Sunday for 152 yards and a touchdown in the team’s road win over the Arizona Cardinals, one of them stood out a lot more than the rest that found there mark and that one can probably be defined as the offensive play of the game for the team.

With 2:14 left in the fourth quarter of Sunday’s game against the Cardinals the Steelers offense faced a critical third-and 13 from the Arizona 26-yard-line. On the play in question, Hodges escaped pressure to his left and then threw on the run and somewhat across his body to wide receiver Diontae Johnson for a first down. That first down ultimately led to the Steelers being able to use another 32 seconds of game clock time and forcing the Cardinals to use their final two timeouts of the game prior to kicker Chris Boswell kicking a 25-yard field goal to close out that offensive possession.

Devlin Hodges' play outside the pocket to effectively win it #Steelers pic.twitter.com/5YVgIJZqV3

That play outside the pocket was officially the first one Hodges has made in his three starts this season. After Sunday’s win over the Cardinals, Hodges was asked about that big third down completion to Johnson late in the game is a good example of who he really is as a quarterback despite him throwing back across his body.

“I mean, usually the quarterback’s not supposed to throw across their body and that’s usually not a good thing,” Hodges said. “It was just one of those things that 1-8, Johnson came wide open and I knew that I could throw it and get the first down. So, I mean, it’s just all about making plays when plays need to be made.”

Steelers head coach Mike Tomlin was essentially asked after the game was over if he was effectively holding his breath on that third down play while watching it transpire.

“No, you know, I trust his judgment,” Tomlin said of Hodges after the game. “You know, that’s been a part of his game and he just did a really good job of managing his emotions in the midst of tough circumstances and being prudent, yet aggressive. And so we’re getting more and more comfortable. I can’t say that I was thinking that as he was rolling, no.”

So, with three wins in in his first three NFL starts now under his belt, Hodges was asked after Sunday’s game against the cardinals if it’s all staring to become normal for him the further away he gets from his first NFL start way back in Week 6 against the Los Angeles Chargers.

“I don’t how you want to define normal,” Hodges said. “I mean, it’s just great to have another chance to play and the confidence and the comfort level just comes with playing a lot and practicing. So, I mean obviously the more you practice, the more you play, the more comfortable you get.”

Hodges will now have a chance to win his fourth consecutive start next Sunday night against the Buffalo Bills and no undrafted quarterback has ever accomplished that feat of winning his first four starts in the history of the NFL. After Sunday’s win Hodges was asked if he knew that he’s now the first undrafted quarterback to win his first three starts since Ed Rubbert of the Washington Redskins first accomplished the feat during the 1987 season as a strike replacement player.

“You know, I heard a lot of people talking about it this week and obviously I guess in my mind I was like, well, I guess I need to be the first QB to do that, or undrafted QB to do that, just so we can win this week,” Hodges said. “So, that’s my job is to win the game each and every week and that’s what I want to do and that’s all I’m worried about.”

Hodges was also asked after Sunday’s game to comment on him beating the NFL’s last two overall first-round draft picks, quarterbacks Baker Mayfield and Kyler Murray, in back-to-back weeks and if it means anything to him to accomplish that remarkable feat as an undrafted rookie free agent.

Hodges’ fourth start will take place next Sunday night at Heinz Field against the Buffalo Bills with the No. 5 seed in the AFC going to the winner. Can he get his fourth win in a row? I certainly wouldn’t bet against him doing so.