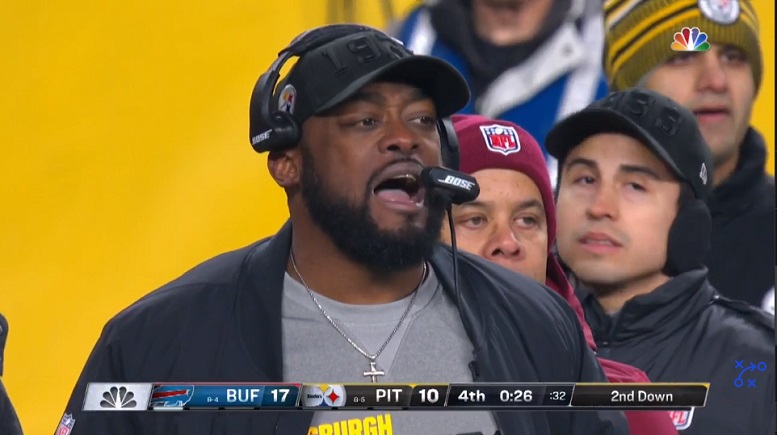 Pittsburgh Steelers rookie quarterback Devlin Hodges made it clear on Wednesday that he learned a valuable lesson about late-game clock management in the team’s Sunday night home loss to the Buffalo Bills and that it is one he feels he should have already learned by now.

Hodges threw four interceptions in the team’s Sunday night loss to the Bills and the final one came immediately following him being sacked on a first down at the Bills 34-yard-line with 34-seconds remaining in the game. After Hodges took that sack, the NBC television cameras showed Steelers head coach Mike Tomlin ordering into his headset that the rookie quarterback ‘clock it’ [spike the football] to stop the clock.

Hodges, however, apparently never heard that order from Tomlin or offensive coordinator Randy Fichtner and after using another 19-seconds of clock time, ultimately ran the pass play that resulted in his fourth and final interception of the game.

“That’s something I should have known,” Hodges acknowledged regarding needing to clock the football after Wednesday’s practice, according to Mike Prisuta of steelers.com. “They were trying to tell me to ‘clock’ it and I didn’t hear it and we went with the play. Even with the play, if I threw a little bit better ball we got a chance. It’s something you learn from.”

As mentioned, the Steelers wasted a lot of valuable clock time following the sack on first down until getting the next offensive play off with 15-seconds remaining in regulation time. Had Hodges gotten the offense to the line and spiked the football with around 25 seconds remaining, perhaps a different play would have been called than the one that was ultimately ran in an attempt to get the young quarterback a shorter shot at the end zone. We’ll likely never know.

Back to Hodges’ other comment on that final ill-fated play, had he indeed thrown that deep pass that was intended for wide receiver James Washington in the end zone a little bit further and higher, perhaps the second-year player could have out-jumped Bills cornerback Levi Wallace for the football and scored. Once again, we’ll never know for sure as the underthrown football was easy intercepted in front of Washington by Wallace.

So, essentially two lessons were learned by Hodges on that final offensive play Sunday night and hopefully doing so will help him in the future.