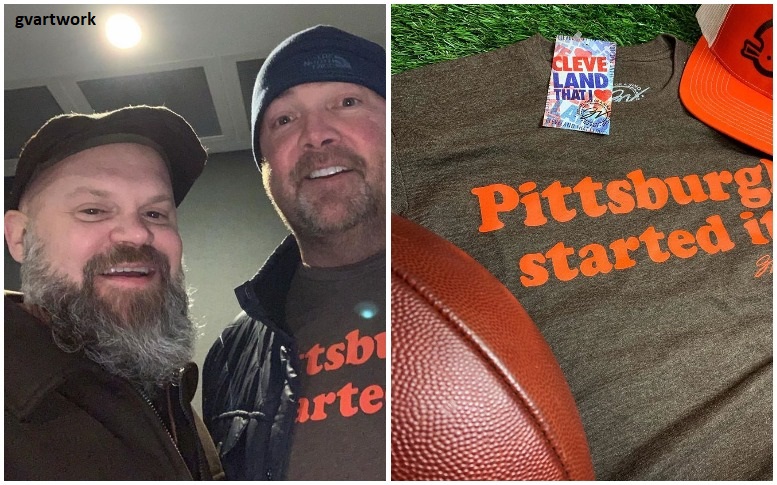 The Cleveland Browns lost to the Pittsburgh Steelers on Sunday at Heinz Field and on the heels of that defeat you can expect head coach Freddie Kitchens to catch quite a bit of heat over the course of this next week due to his wardrobe choice Friday night.

Kitchens, who was photographed Friday night wearing a “Pittsburgh Started It” t-shirt while at the movie ‘A Beautiful Day in the Neighborhood,’ was asked about his decision to wear said shirt immediately following the Browns loss to the Steelers on Sunday.

“I wore a T-shirt, I wore a jacket with it,” Kitchens said. “My daughters wanted me to wear the shirt and I would wear it again. I put a jacket on, I covered it up and I took a picture. And that was as simple as that. You know, the t-shirt didn’t cause us to give up 40 yard passes. And we were ready to play. That’s the only thing people need to be concerned about. We were ready to play.”

While Kitchens still might not see the errors of his way, his decision to wear that t-shirt Friday night ended up being bulletin-board material for the Steelers. Guard David DeCastro even said as much after the Sunday game was over with

“I thought it was pretty stupid,” DeCastro said of Kitchens wearing that t-shirt. “That’s bulletin-board material. I don’t know why you’d do that as a coach. I just don’t get that. Of course it’s going to motivate us. What are you thinking?”

David DeCastro on Freddie Kitchens’ T-shirt: "I thought it was pretty stupid. That's bulletin-board material. I don't know why you'd do that, as a coach. I just don't get that. Of course it's going to motivate us. What are you thinking?"

Kitchens has been under fire most of the season when it comes to his coaching style and ability to have his team ready to play on game days. The Browns loss to the Steelers on Sunday on the heels of his wardrobe choice Friday night certainly won’t deter his critics moving forward into the final quarter of the regular season.

While the Browns are still mathematical alive for an AFC Wild Card spot after 12 games played, they’ll need a minor miracle to make it into the postseason tournament thanks to their Sunday loss to the Steelers.

Will Kitchens be one and done after the season ends? It’s hard to say for sure but knowing the history of the Browns when it comes to quick coaching hooks and the expectations the organization had going into this season, the team finishing with a sub .500 record four weeks from now won’t make Kitchens look like he’s the right person to be the head coach of the team moving forward. He might not need to worry about wearing that t-shirt again a month from now.