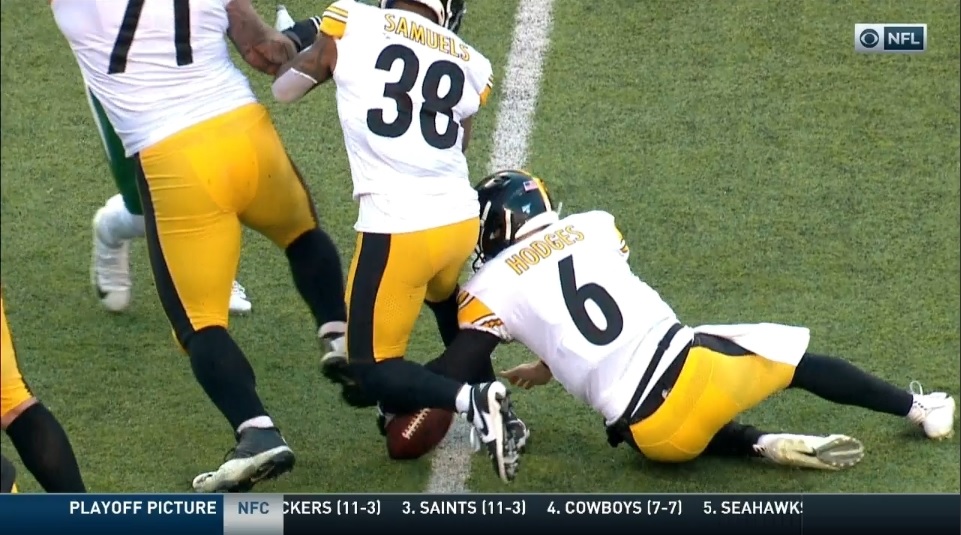 It is almost unbelievable that with all the turnovers and sloppy football, the last two games for the Pittsburgh Steelers have still come down to their last possession. Last Sunday’s battle against the New York Jets was one of the offense’s most frustrating showings of the season. The chances were there and the Steelers pulled the trigger but they did not manage to hit their intended target. Instead, the Steelers only managed to shoot themselves in the foot time and time again.

Here is where it all went wrong.

Drive One In NY Territory: Interception

Devlin Hodges is facing a third and 10 at the New York 45-yard line and he makes his first errand pass of the day. While Hodges may think he has a shot to hit Vance McDonald, what he does not see is Jets’ outside linebacker Tarell Basham dropping into coverage. Basham does a great job disguising his coverage drop as it initially looks like he is going to blitz before he drops back and comes down with his first career interception.

Deja-vu here as Hodges throws another interception on the Steelers’ second trip into New York territory. The undrafted rookie quarterback made rookie mistake after rookie mistake and it all culminated with this interception. The pass is intended for Jaylen Samuels and there are a few problems with this decision. One, Hodges locks on to Samuels the entire time. Two, on a third and three, he was likely better off hitting Diontae Johnson who was dragging across the middle of the field. Hodges is a gunslinger but without the zip to be a true gunslinger this is an easy interception as he floats it in the middle of two Jets’ defenders.

Drive Three In NY Territory: A Drop And A Sack

The Steelers’ third opportunity in New York territory would come with Mason Rudolph at quarterback and he was really let down by his team during this sequence of events. Facing a 1st and 10 at the Jets’ 30-yard line, Rudolph’s first pass attempt is flat out dropped by JuJu Smith-Schuster.

He is then sacked on his second drop back for a loss of nine, pushing the team back to the Jets’ 39-yard line. The Jets really confused the Steelers’ offensive line on that sack with a stunt that saw Henry Anderson stunt into the A gap and linebacker Neville Hewitt stunt into the B gap. The confusion allows Hewitt to break into the pocket and sack Rudolph.

While the Steelers were able to get three points here, you can not help but feel that they potentially left more points on the table.

Rudolph did find Johnson in the end zone on the Steelers’ fourth drive in New York territory but that was about the only success the team had on the other half of the field.

Two plays above once again and this was another opportunity squandered. Steelers are at the Jets’ 40-yard line facing a 2nd and seven. Right on the cusp of field goal range, it would have been nice if the Steelers could have at least walked away with three here but instead they left with nothing.

First play sees Rudolph just chuck it downfield to James Washington. The pass ends up out of bounds after Washington fails to beat his man. Nothing wrong with the aggressiveness here but it leaves the Steelers now in a 3rd and seven.

The third down play is doomed almost immediately as the pocket collapses. Alejandro Villanueva is bull rushed back into the pocket and Rudolph is forced to check it down to Jaylen Samuels. The pass is dropped and that is the end of the Steelers’ fifth attempt in New York territory.

Drive Six In NY Territory: Sack And A Bad Snap

Perhaps the most infuriating drive of the game for the Steelers. Down by three, Hodges has the team at the Jets’ 29-yard line facing a 2nd and seven. At worst, the team should leave this drive with the game tied but two self inflicted wounds would deny them that chance.

On second down, the Jets’ defense outsmarts the Steelers’ offensive line again with another great disguise. James Burgess (#58) fakes the blitz before backing off. This draws forward Ramon Foster and allows Quinnen Williams to slip by him for an untouched sack.

A botched snap on third down ends any hope of recovering lost yardage. This two-play sequence was nothing short of a disaster.

One last prayer to win the game is all the Steelers have left but Hodges’ heave into the middle of the field falls to the ground harder than the Steelers’ playoff hopes have. Smith-Schuster was unable to bring this one down as the ball passes through his fingertips after he possibly mistimed his jump.

The Steelers had seven chances in New York territory and they were only able to find the end zone on one of those seven chances. Despite looking locked and loaded, the Steelers only managed to shoot themselves in the foot. Because of that, they no longer hold the power to control their own destiny as their playoff hopes have now been taken hostage and the Steelers have no one to blame but themselves.