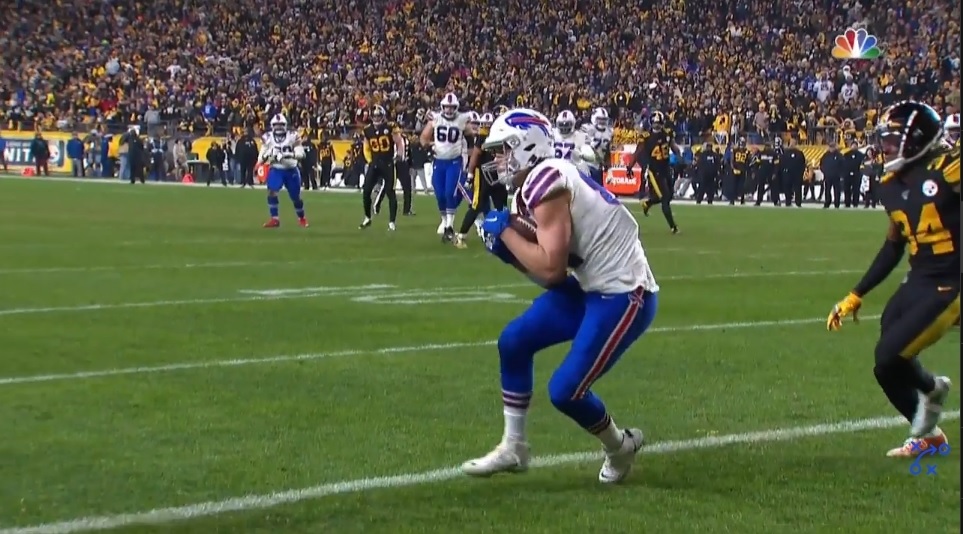 Every coverage has strengths and weaknesses. Sunday night, the Buffalo Bills exploited the ever living heck out of the Pittsburgh Steelers’ Cover 2.

So what is the weakness of Cover 2? The “hole” shot. Traditional Cover 2 has the corner play the flat, the safety the deep half. That creates a gap along the sideline behind the corner and in front of the safety. Because the safety has to defend half the field – i.e. nearly 27 yards – he’s stressed to match any sideline route.

The most common concept to beat Cover 2 is called “smash,” designed to put the corner in conflict. Two-man combination route with a flat route to hold the corner underneath and a corner route over the top. Keep the corner shallow, force the safety to rally and drive on the corner. Tough assignment for nearly anyone.

At least twice Sunday, the Bills successfully ran smash. The first came on 3rd and 10 in the third quarter. Josh Allen finds John Brown for a 20 yard gain. 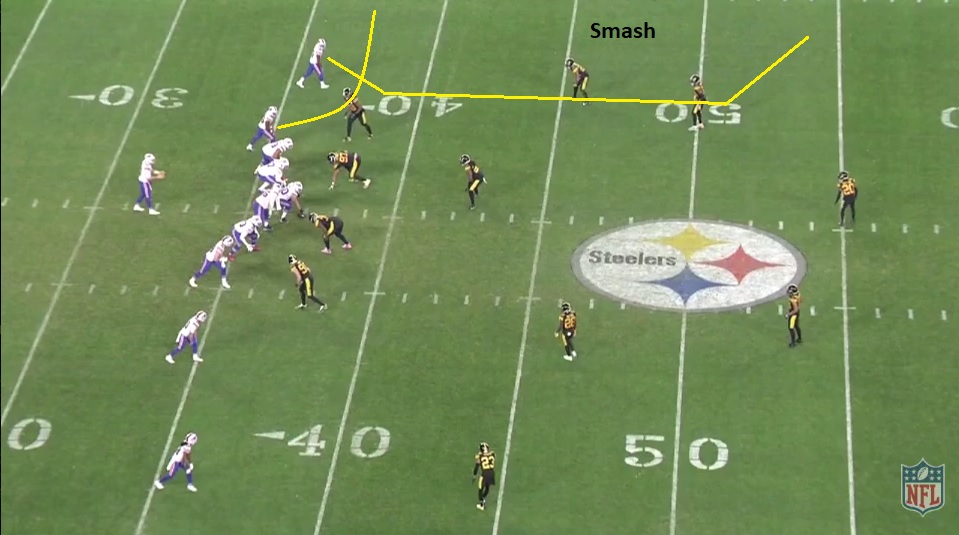 The flat route by the back holds Steven Nelson, opening up Brown on the corner. And Edmunds isn’t able to chase it in time. The issue? Nelson doesn’t get enough depth. Corners have to help the safety to defend this concept by getting depth and squeeze the throw, hopefully discouraging the QB from throwing it or being late in his decision.

You’ll see it in the clip below. Compare him to Mike Hilton, the flat corner to the bottom. Hilton sinks to the Steelers’ 49. Nelson? He’s at the Bills’ 46. Helps open up the window for Allen to make the throw in the hole.

This is on the corner, not the safety. Remember, it’s 3rd and 10. Let the offense throw the checkdown to the back. Then you simply get downhill, rally, and tackle him short of the sticks. Better to give it up short and in front than over your head.

Matt Bowen explained it clearly when describing Cover 2 years ago. He wrote:

“There is a “hole” (or target zone) in Cover 2 between the safety and the corner along the sideline. The 7 (or flag) route and the quick one-step fade are run to attack that area of the coverage. It is on the CB to jam No.1 and then sink (at a 45 degree angle) to protect the safety and take away those two routes. Whenever you see the quarterback complete one of those two throws vs. Cover 2 it is because the CB didn’t get enough depth. That isn’t the safety’s play to make.”

Bills run the same concept on Tyler Kroft’s game-winning touchdown. 3×1 with the TE “nub” weakside. Back to the flat, Kroft on the corner. Here’s a look at it.

So who’s at fault here? On the surface, it’s easy to point to Edmunds and I did after the game. After all, it’s the only route to his side. But that’s still a tough play to make, you don’t know the tight end running the corner until he declares and Edmunds breaks with him. Edmunds has to protect the entire half of the field. The seam, the post, anything from the trips side that comes across.

What about Mark Barron? He drops off Kroft. But he’s in zone coverage, the weakside hook defender, so it makes sense for him not to carry the route the whole way through. Compare him to Cam Sutton on the opposite side. Gets the same depth and width. Zone defense is all about passing off routes based on their distribution.

The guy we’re not talking enough about? Joe Haden. Just like the first play above, Haden probably needs to get depth here. It’s 3rd and 9. Back out in the flat. Anticipate smash, get depth and a squeeze the potential throw. Let them throw underneath, especially with the back running out of your zone. Why Haden chased him, I’m not sure.

To be fair, this is a tough play to breakdown. It’s hard to assign blame with 100% certainty. Pittsburgh may have a different “check” in this situation. With the TE nub, it being in the red zone, sometimes things get played differently than a 2×2 look in the open field. I tried to go through similar situations throughout the season and they’re just aren’t many examples of Pittsburgh getting this look. Makes it more difficult in determining fault.

And as Mike Tomlin said after the game, this is also sound scheme by the Bills. Best route beater against the Steelers Cover 2 look to that side. Stress the corner, stress the safety, and if your QB makes an on-time, perfect throw, as Allen did here, it’s awfully hard to stop.

My advice? Don’t play spot drop Cover 2 on 3rd down. The Steelers probably leaned on that more because they were facing a mobile quarterback and man coverage takes eyes off the ball, making Allen a legitimate threat to run if he escapes the pocket (or making it harder to plaster on a scramble drill). Steelers have had their most third down success on 3rd and long when playing 2 Man, making every throw tight and contested, and that is the really big failure here. Can’t play soft zone with no reroutes in these situations. No surprise they got burned twice in the second half on basic, staple passing concepts.