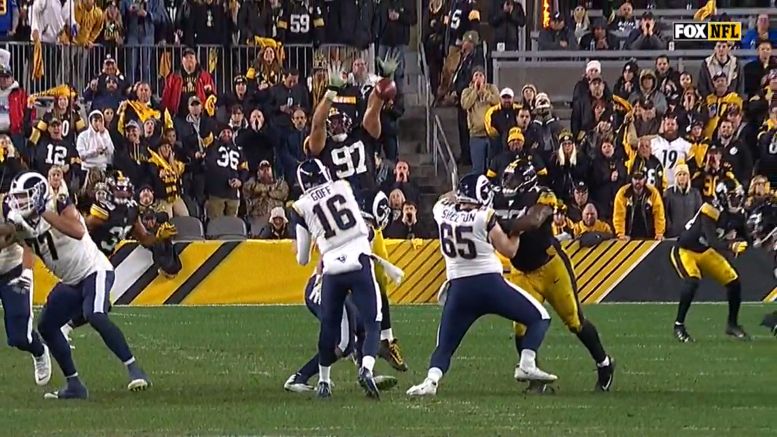 If there is one player who embodies what it means to be a Pittsburgh Steeler, it would be hard to pick anyone but defensive lineman Cameron Heyward. The veteran defensive end is the poster boy for what being a great leader and all-around player represents. When it comes to on-field play, there are many areas where Heyward excels. He is a great interior pass rusher and also a great run defender but one area that flies under the radar is Heyward’s ability to bat down passes.

The art of the pass bat down focuses primarily on anticipation and awareness. First, the lineman must have great instincts and be able to time his jump correctly with the quarterback’s release. Secondly, it takes incredible awareness to understand what is transpiring in the pocket. No pass rusher is going to cause pressure on every snap but batting or tipping a pass can be just as much of a positive at times, especially if it negates what could potentially be a first down or big play.

Heyward notched his fifth pass defense of the season against the Buffalo Bills last Sunday by knocking down this pass from Josh Allen. Heyward not only timed his jump perfectly with Allen’s release but he showed true veteran instincts by getting his hands up in the throwing lane. Quarterbacks like Allen have learned that passing against the Steelers’ defense is not only a challenge because of their ball-hungry secondary but also because they feature a ball hungry front seven that consistently gets their hands in the quarterback’s throwing lanes.

The 30-year old defensive lineman is among the best at getting in the opposing quarterback’s throwing lane, but that is not the only way he manages to disrupt pass attempts. Below are a few more examples this season that highlight a few of the different ways that Heyward has been able to get his hands on the football.

Watch as Heyward recognizes the screen pass from the start as he notices the offensive linemen are neither dropping back in pass protection or rushing him as they would when they run block. Due to this, it becomes clear that a screen pass is occurring and Heyward sniffs out running back Mark Walton and deflects the pass for an incompletion. Just another example of the high football IQ that the defensive captain brings to the field.

One of Heyward’s two passes defended from the Rams’ game earlier this year and this was definitely the more impressive pass bat down. The Steelers’ defensive lineman is not directly in Jared Goff’s throwing lane but watch as he uses his leverage to position his body into the throwing lane. Heyward is one of the best at gaining leverage and he puts on a clinic on the above play to record another pass bat down.

A master at his craft, only a few defensive linemen have recorded more passes defended than Heyward this season.

Most Passes Defended By A Defensive Lineman This Season

Carlos Dunlap and Shelby Harris are the only two linemen to record more passes defended than Heyward this season. While Heyward may not be at the very top, he has consistently been able to be a thorn in the side of opposing offense’s passing attack for a number of years. Since 2013, Heyward ranks top five in most passes defended by defensive linemen.

Most Passes Defended By A Defensive Lineman Since 2013

Before getting back into the jazz of Heyward’s play, it’s astonishing to note that arguably two of the top pass disrupting defensive linemen both currently play in the AFC North. Dunlap and Heyward have been the definition of consistency when it comes to knocking down pass attempts. While it may go largely unnoticed, Heyward’s ability to get into opposing quarterback’s throwing lanes is just another testament to the great player he is.

When factoring in the holy trinity of traits that define an interior rusher – pass rush, run defense and pass defense, there are not many players more well rounded than Heyward. His pass rush and run stuffing abilities will be talked about endlessly but his pass defense skills are also a significant reason why he is once again having another strong season in the black and gold.