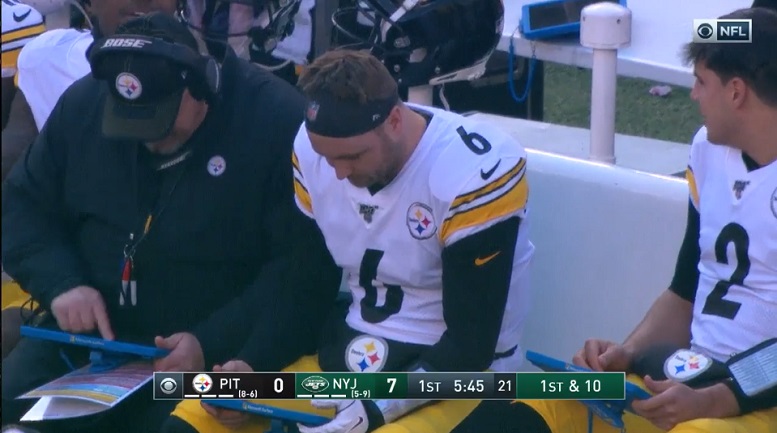 Pittsburgh Steelers rookie quarterback Devlin Hodges will start the team’s regular season finale on Sunday against the Baltimore Ravens and the hope is that he’ll be able to bounce back from his last two performances that included him throwing six interceptions and being sacked seven times. On Thursday, Steelers offensive coordinator Randy Fichtner met with the media and during his session he was asked what reasonable expectations he has for Hodges on Sunday against the Ravens following the quarterback’s last two poor outings.

“Well, I expect that we will eliminate any mistakes that he has made and whatever mistakes he makes in this game will be a new one,” Fichtner said. “He has been pretty good at that minus a handful of balls that could have been in better places, could have been more protective of the football. As far as game management and some of the things he has done for protection and running the system, he has done really well.”

Of Hodges six interceptions in the last two games against the Buffalo Bills and New York Jets, five happened on the opposition’s side of the 50-yard-line and several of those were a result of poor decisions by the rookie undrafted quarterback out of Samford. On Thursday, Fichtner was asked if there’s anything that he or Hodges need to alter this week to reduce the potential for turnovers moving forward into the Sunday finale against the Ravens.

“No, because you can’t not play aggressive,” Fichtner said. “You have to try and score. If you’re not trying to score, you probably won’t.”

While Fichtner wants Hodges to remain aggressive, he also expects the young quarterback to do so smartly. That means Hodges needs to be more than willing to take what the Ravens defense gives him underneath on Sunday whenever the opportunity presents itself.

So, has Fichtner seen any commonalities in the interceptions that Hodges has thrown recently?

“Not necessarily, some have come at the end of the game, some have come early in game,” Fichtner said. “He didn’t see a zone blitz dropper the other day [against the Jets] earlier in the game. He felt like he had the throw and as soon as he threw it, you can tell. You can always look at him and you will see the quarterback backing up like, ‘I know what I just did.’ Some of that just comes with repetition, reputation. Every defense is different, and this is another unique challenge this week.”

Fichtner not only referenced the first of the two interceptions that Hodges threw against the Jets as he also commented on the second one that happened on a third down play from the New York 19-yard-line with 10:27 left in the first half while responding to a Thursday question about wide receiver JuJu Smith-Schuster.

“Hell, the very ball that Duck [Hodges] threw a pick on in the end zone [to Jaylen Samuels], maybe if we throw it to JuJu standing near the sideline, he might run it in for a touchdown,” Fichtner said. “It might have been the difference in the game.”

I suppose that many might take Fichtner’s comments about Hodges two interceptions against the Jets has him throwing the rookie quarterback under the bus. Regardless of whether you think that, Fichtner is not wrong in his assessments of those two interceptions. Below is the all-22 view of Hodges’ second interception and as you can clearly see, he had Smith-Schuster wide-open near the right sideline. Remember, it was a third down with 3 yards to go and if he gets the football to Smith-Schuster it’s a first down and possibly even a touchdown if the wide receiver were to break a tackle or two.

Even if a throw to Smith-Schuster on that play in question fell incomplete for whatever reason, a very makeable and needed field goal attempt likely would have followed. Instead, Hodges forced the ball a tad late to running back Jaylen Samuels in the end zone and the offense came away with no points on that deep drive because of it being intercepted.

For now, all we can hope for is that Hodges won’t turn the football over any on Sunday in a virtual must-win season finale game against the Ravens and this week in practice and meetings Fichtner plans on doing very thing he can and has been doing this season to help his young rookie quarterback potentiality achieve that goal.

“Just keep repping and keep watching the tape and keep talking about where the ball could have gone better, how better he might have placed the ball.” Fichtner said on Thursday when asked what he plans to do this week to help Hodges. “Those are all things you coach every day. It wouldn’t matter if it is a practice rep or a game rep, it just happens to be more reps for him and they are in-helmet in a game, so they are good for coaching.”

We’ll find out on Sunday in Baltimore if Hodges can indeed bounce back against the Ravens. If it’s of any consolation, Hodges did play well against the Ravens in relief of concussed quarterback Mason Rudolph in the Week 5 loss in Pittsburgh. In that game, Hodges, who took over for an injured Rudolph with 7:17 left in the third quarter, completed seven of his nine total pass attempts for 68 yards with no touchdowns and no interceptions. He engineered two scoring drives in that game and the Steelers probably would have came away victorious in that contest had Smith-Schuster not fumbled away the football in Ravens territory in overtime following a catch from Hodges.