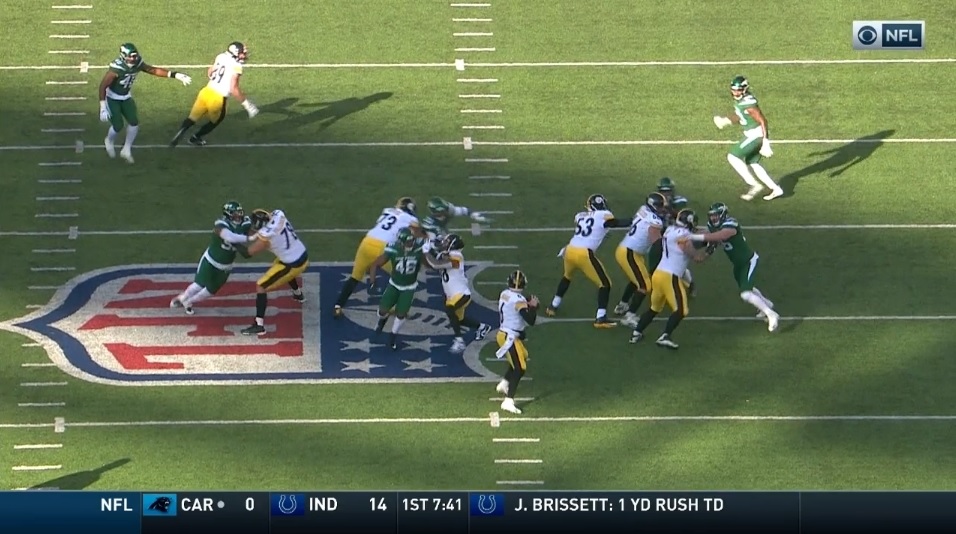 The Duck started it and the Duck ended it. In a game full of injuries, quarterback switches and overall sloppy play, Devlin Hodges and the Pittsburgh Steelers were upset by the New York Jets by a score of 16-10.

Hodges was responsible for both of the Steelers’ turnovers on the day and was yanked shortly after for Mason Rudolph. While Rudolph did shine in a short body of work, an injury meant that the Steelers turned back to Hodges who was unable to put the offense in position to score all day.

The Jets got on the board early, as they used eight plays to go 75-yards to get an early 7-0 lead on the Steelers. Le’Veon Bell patiently worked the Jets into position for their first score as he flashed the running style that made him a star in Pittsburgh. After Bell took them downfield, Darnold would complete the drive by throwing a perfectly placed ball to Robby Anderson for a 23-yard touchdown pass. Anderson was doubled by both Joe Haden and Terrell Edmunds but the Jets’ quarterback was able to thread the needle for the opening touchdown.

Off the foot of a 54-yard field goal, the Jets would increase their lead to 10-0 and the Steelers looked to be in position to close the gap but a few costly mistakes by the quarterback would only stagnate their efforts.

Hodges will tell you himself that he is a gunslinger. He is not afraid to sling the football downfield but unfortunately; he has been throwing the football to the opposing team more than his own team recently. That trend continued today as Hodges threw two interceptions before halftime, with one occurring in the end zone. With seven interceptions over the last two games and two interceptions today, the Steelers put duck season on hold and went back to Rudolph.

Rudolph came back in and immediately got back to work, leading scoring drives on two of his first three drives. A 10-play, 55-yard drive led to a Chris Boswell field goal right before the half. This initially looked to be the only points the Steelers would get before halftime but T.J. Watt had other plans.

With just over thirty seconds remaining in the second quarter, Watt completed the trifecta – sacking, stripping and recovering the football after he took down Darnold. His 14th sack of the season would be huge for Rudolph who found Diontae Johnson for a 29-yard touchdown with four seconds left to tie it at ten at the half.

Sam Ficken would add another field goal to put the Jets back up and this would be all the points either team would muster in the third quarter.

The third quarter was a quiet one for the Steelers production wise but there were more than a few notable injuries that occurred. James Conner was ruled out shortly after half time with a thigh injury. Center Maurkice Pouncey exited with what looked to be a knee injury and was carted off after entering the blue tent according to CBS. Cameron Heyward also exited with an elbow injury but the biggest injury of all came to Rudolph. The Steelers’ quarterback injured his left shoulder and did not return.

Rudolph would finish the game 14/20 for 129 yards along with one touchdown. Down 13-10 with just over ten minutes remaining, the Steelers would turn back to Hodges. In position to at least tie the game, the offense did the unthinkable as they allowed a sack and a botched snap on consecutive plays. This sequence would knock them out of field goal range and the Jets would make them pay, adding another field goal on their ensuing drive to go up 16-10.

Despite having one last attempt to win it, the score would not change from there as Hodges did not have enough air under his wings to safely guide the Steelers to victory. With the loss, Mike Tomlin’s team would drop to 8-7 and will now need to scoreboard watch next week if they hope to make the playoffs. The Steelers will take to the road and take on the Baltimore Ravens next Sunday at 1:00 p.m.