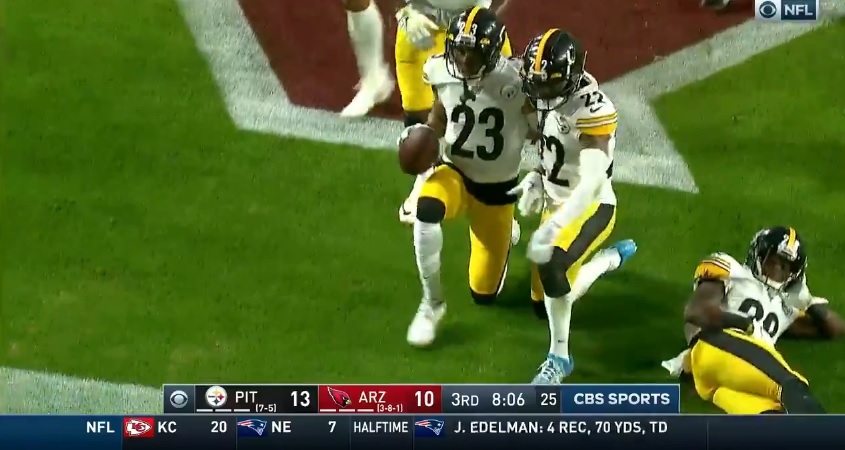 Devlin “Duck” Hodges threw it, Diontae Johnson ran it and the Steelers defense finished it as the Pittsburgh Steelers were able to slow down the Arizona Cardinals and escape the desert with a 23-17 victory.  Hodges completed 16/19 passes and added a touchdown, Johnson added 163 scrimmage yards and two touchdowns while the defense recorded five sacks and three interceptions as they powered through this young and quick Cardinals’ team.

Anytime Kliff Kingsbury is involved, it is virtual guarantee that it is going to be a fast-paced affair and this game really got going fast, just not for Kingsbury’s Cardinals. The Steelers scored on their first drive of the game, going 68-yards on 13 plays before settling for a Chris Boswell field goal to go up 3-0.

The Steelers upped the score from 3-0 to 10-0 before the Cardinals could even blink as Diontae Johnson took a punt 85-yards to the end zone before the Steelers’ offense could step onto the field for their second drive. Johnson’s punt return was the Steelers’ first since 2015 when Antonio Brown returned one for 71-yards.

Just as fast as the Steelers jumped in front, Kyler Murray and the Cardinals would tie the ballgame in similar speed. After starting just 2/5, Murray completed 11/12 passes for 83 yards and a touchdown on two scoring drives as the Cardinals tied this one at 10. By quickly getting rid of the football, Murray was able to keep the Steelers’ pass rush off balance and would find Charles Clay for a five-yard touchdown pass.

Hodges would quickly get the Steelers in position for another field goal before halftime to retake the lead.

The Cardinals’ offensive surge did not seem to cool off after halftime as they came out strong after the Steelers were forced to punt on their first drive of the half. Even when it looked like the Steelers had Murray stopped, the Cardinals broke out a surprising fake punt and picked up the first down to move into Pittsburgh territory. Just when it looked like the Cardinals would score at least a field goal, Joe Haden came out of nowhere to save the day. It would not be the only time he saved the day and the game.

With the ball at the Pittsburgh 26-yard line, Murray looked to hit a quick out route but Haden read the pass the whole way and jumped the route for an interception. Hodges and the offense would turn those into points and it would once again be Johnson who found his way into the endzone.

The rookie receiver would first set up his touchdown by taking a screen pass all the way from one sideline to the other as he picked up 14-yards for a first down at the Arizona two-yard line. Two plays later, Hodges would find Johnson at the pylon for a two-yard touchdown pass to put the Steelers up 20-10. Johnson finished with six catches for 60-yards and two touchdowns in what was the best showing of his rookie season.

Turnovers would continue to plague Murray as he once again had the Cardinals in position to score but the Steelers’ defense was able to play takeaway for a second time. Facing a 4th and two, Murray’s pass into the end zone was intercepted by T.J. Watt.

In what was one of the most incomprehensible plays of the year, the Steelers opted for a fake punt on the ensuing drive and punter Jordan Berry was leveled by the Cardinals’ defense for a loss. Murray would get the touchdown he missed earlier by connecting with David Johnson in the end zone for a 24-yard touchdown over the fingertips of Terrell Edmunds.

Despite the gaffe from the Steelers’ special teams unit, Hodges would show incredible poise as he orchestrated a 10-play drive to add another field goal to the Steelers’ lead.

With just under two minutes left, Murray had one last chance but two sacks and another interception by Haden would seal this one. Murray was held to under 200-passing yards and was also intercepted three times, the first three interception game of his career.

The Steelers will now arrive back in Pittsburgh as they prepare to take on the Buffalo Bills in their home finale on Sunday Night Football. A win next week would push the Steelers into the fifth seed in the AFC playoff picture.