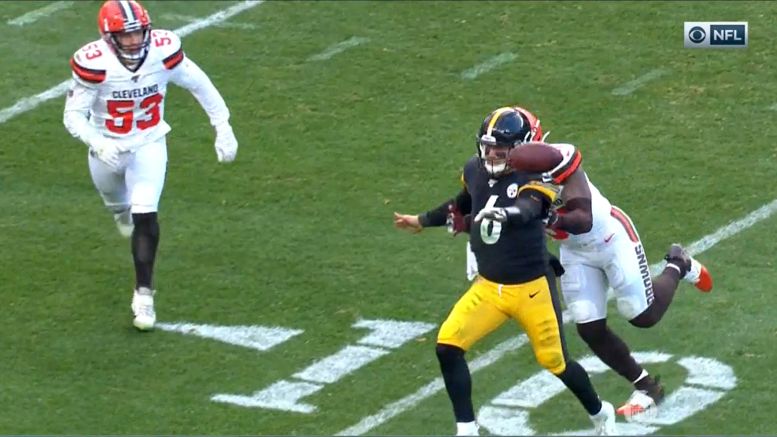 For as much confidence as Devlin Hodges has in his own abilities—when he takes a snap, he expects to make the play every time, without question—the rookie quarterback also has an appropriate sense of realism in the aftermath, and he’s not afraid to assess himself critically.

The undrafted rookie, who is suddenly the Pittsburgh Steelers’ starting quarterback, “played his tail off”, as head coach Mike Tomlin said, an overall very solid and winning performance, for certain. But there were also several moments of negativity that I expect he will take the opportunity to learn from this week, each of which he talked about after the game.

The first issue of note came very early in the team’s offensive playing time. I believe it was the first pass on third and seven. Hodges rolled out of the pocket and into pressure. One of the biggest issues he’s had during his playing time so far is poor pocket awareness and mobility, seemingly afraid to step up in the pocket to make a throw.

I don’t know if that has something to do with his height, where he’s just more comfortable rolling out when there’s pressure so he can scan the field, but whatever it is, he’s screwing up the angles for his blockers and it’s leading to negative plays. He was sacked only once on the afternoon, and it was his fault for rolling out rather than stepping up.

“I probably got out of the pocket a couple times when I shouldn’t have”, he acknowledged after the game. “That two-minute drive probably was when I really kind of started settling down in the pocket, and that’s when we started clicking a lot better”.

“I was trying to throw it away, probably not the smartest play I had”, Hodges said. “But once it hit the ground, I just wanted to make sure that it got out of bounds so they couldn’t get the ball back because we were in field goal range”.

He also took the blame on the interception he threw on what looked in part a miscommunication with Diontae Johnson. “It was just me trying to force it a little bit”, he said. “Overthrowing Diontae. It’s definitely a play I wish I had back”.

One play that he didn’t talk about was the final third down and seven just after the two-minute warning. He threw the ball away rather than take a sack, which gave the Browns 30-plus extra seconds of clock time to work with in a one-possession game.

Hodges is a young guy from a small school. His head is probably spinning in many ways. He’s taking so much in on a weekly basis. All things considered, he’s handling it very well. That he sees his mistakes is also a big component of his progression.