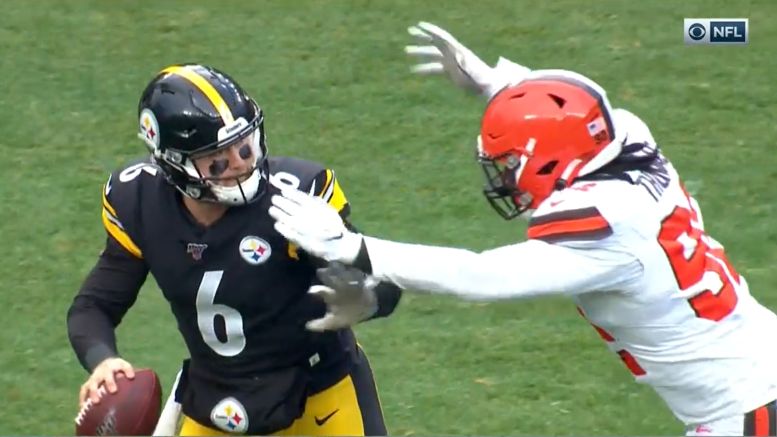 The Pittsburgh Steelers are 2-0 in game in which Devlin Hodges started. I’m not sure if that or the fact that he has started multiple games is the more remarkable story of the 2019 season. The undrafted rookie out of Samford was never supposed to be on the roster in the first place, though he wasn’t long out of the organization after the team traded Joshua Dobbs a week into the season.

He went from unemployed to practice squad to third-string quarterback in a matter of weeks, then a couple weeks later made his NFL debut, then his first start due to injury. Several weeks on, as we fast forward, he is now likely the Steelers’ starting quarterback for the remainder of the season, provided that he continues to ‘not kill us’, as Mike Tomlin would say.

As a reminder, Hodges not only went undrafted, he was also unsigned. Only two teams even issued him invitations to attend rookie minicamp. He worked through the New York Giants’ camp without getting a contract, but then worked for the Steelers and stuck.

After the game, during which Hodges completed 14 of 21 attempts for 212 yards with one touchdown and one interception, he was asked if at any point along the way he doubted himself as to whether or not he really was an NFL player. “Never, never, never once thought that”, he said.

“I’ve always believed in myself. I know I’ve had people in my corner that have believed in me”, he went on, noting that the organization and the staff and locker room consistently supported him as well, whether he was there or not.

“Even the guys on the team, even when I was let go, I had a bunch of them text me and say, this isn’t over for you”, he told the reporters. “Even some coaches. I’m thankful for the Steelers and the opportunity I’ve had here, and I’m definitely thankful to be a Steeler”.

It took an injury, a trade, and a rough stretch of turnovers, but we’re now looking at the realistic possibility of Hodges leading the Steelers into the postseason. That would have been an absolutely absurd thing to suggest a few months ago, but here we are.

“Just being in the NFL, and starting in the NFL, that’s definitely a dream I’ve always had, and I always knew I could do it”, he said. He’s already mastered duck calling. He still has some things to clean up in his football repertoire, but he should only get better as he gets more experience.

Fortunately for him and the team, they have a defense that is playing great complementary football right now. As Ramon Foster said leading up to the game, they don’t need him to save the world. They just need him to keep from crashing down on it.