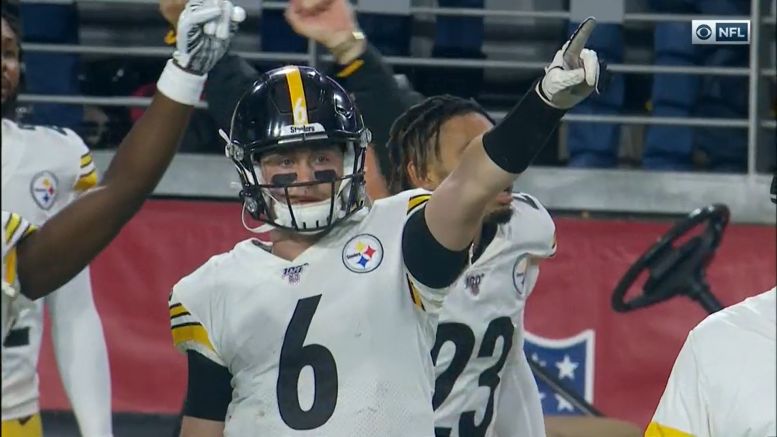 You’ve probably heard the stat going around, but it’s a pretty interesting one. With the Pittsburgh Steelers’ win last night, Devlin Hodges became just the second undrafted rookie quarterback in the common draft era to win his first three career starts. The only other one to accomplish that feat comes with a caveat, as it came in the strike-shortened season of 1987, courtesy of replacement player Ed Rubbert.

And Rubbert only played in those three games that season, so if Hodges wins his next game, he’ll become the only undrafted rookie to have won four starts. Does he care? Well, not particularly. As he told reporters after the game, it only matters insofar as it means that he’s winning games.

“I heard a lot of people talking about it this week”, Hodges said during his post-game press conference. “Obviously, I guess in my mind, I was like, ‘well, I guess I need to be the first undrafted QB to do that just so we can win this week’. That’s my job, is to win the game each and every week, and that’s what I want to do. That’s all I’m worried about”.

Hodges’ first start came back in Week Six against the Los Angeles Chargers out west. The Steelers jumped out to a 24-0 lead in that one, ignited by a Devin Bush fumble return for a touchdown. A Bush interception returned to the Chargers’ 40-yard line set up a short touchdown drive on the next possession. Then a lengthy 86-yard run-heavy drive was capped off by a 26-yard catch-and-run touchdown by James Conner.

The Samford product wouldn’t see the field after that game until the second half of the Cincinnati Bengals game, after Mason Rudolph was benched because hew as struggling and turning the ball over. He helped the offense score 13 of the final 16 points to complete the comeback after inheriting a 7-3 deficit.

Head coach Mike Tomlin announced him as the starter for the game against the Cleveland Browns the following week, and while they started slow, they would score on four consecutive possessions for 20 unanswered points after falling behind 10-0 early. Then they were able, in part, to run down some of the clock, not without some late-game adventures.

Then there was last night’s game, a 23-17 win over the Arizona Cardinals. Arizona’s offense actually outscored theirs, as seven points came off of a punt return, but Hodges largely did his part in authoring the win, his third and three starts.

His next opportunity comes on Sunday night against the Buffalo Bills at home, against yet another first-round draft pick in Josh Allen. Assuming he finishes the season as the starter, every one of his games will have come against a former first-round pick—though the majority of starting quarterbacks are first-rounders. Not him. And that’s what makes his record unique.