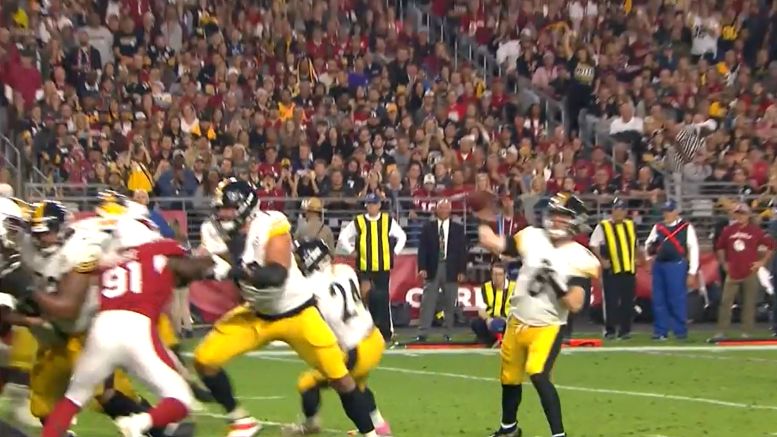 As I wrote earlier today, it’s Duck season. Nothing has changed since then—he’s still not the Pittsburgh Steelers’ franchise quarterback—but rookie Devlin Hodges put together yet another overall solid game, winning his third start in as many tries and the team’s fourth win during his five games of action.

It’s also his second win on the road, both out west, which is significant given the Steelers’ long history of struggles playing on that side of the country. They’ve even managed to lose to some really bad Oakland Raiders teams under Mike Tomlin. But I digress.

The point is, Duck is still slinging it. Today, he completed 16 of 19 pass attempts, and one of those incompletions was a throwaway. He threw for 152 yards, averaging an even eight yards per attempt, with one touchdown—a two-yard narrow-angle completion to Diontae Johnson, to no interceptions.

I would say that he did a better job of protecting the football today, but he also took an unnecessary sack in the first half from the right side by Chandler Jones, who dislodged the ball. Matt Feiler, who allowed the pressure, was fortunate to recover.

The Steelers are doing a good job of not putting too much on Hodges’ plate, yet showing the willingness to put the ball in his hands in big moments, and he’s come up with some critical late-game or late-half completions during his playing time. He had a big 18-yard connection to Johnson to set up first and goal with two minutes to play today.

There’s no doubt that he will continue to start for the remainder of the season provided that he continues to play at the level that he is. There’s no way at this point that Tomlin would pull him, given what he has done in-game, based on whatever he might see in practice between him and Mason Rudolph, who was benched in the second half two weeks ago.

Hodges took over a 7-3 deficit in that game and marshalled the comeback. Tomlin declared him the starter for last week’s revenge game against the Cleveland Browns, and as he continued to perform well, he continued to earn the right to start.

Now he is putting together a string of consistency and a body of work substantial enough to start to sink into from an evaluation perspective. He has done enough to be entitled to the right of starter for the rest of the way without having to look over his shoulder unless he does what Rudolph did, which is start turning the ball over.

It should be noted that he has gotten a lot of help at times from his playmakers. Rudolph wasn’t getting a lot of that in his last few starts, but the Steelers’ skill positions have been stepping up in significant ways in recent weeks. No matter who is under center, that is a key and critical development for the offense going forward.