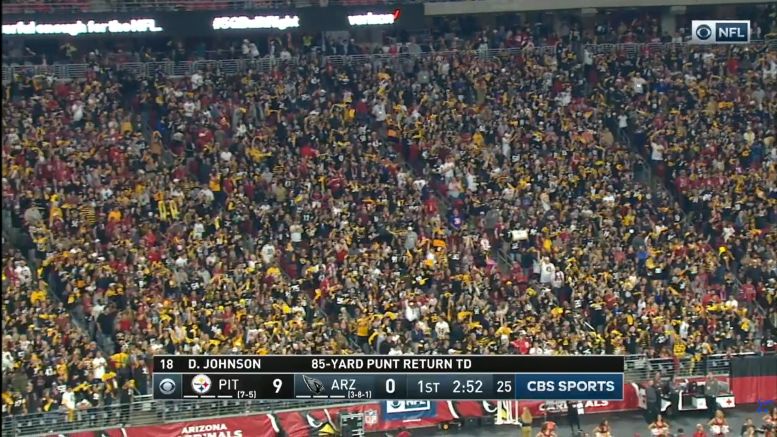 Pittsburgh Steelers fans are known to travel well for the team’s away games, and so does the angst the home players feel when they drive up to the stadium and see the sea of black and gold. It gets worse, I’m sure, once the game starts and they actually hear boos from the stadium when they do something good.

The latest team to experience the phenomenon was the Arizona Cardinals, who have long been branded ‘Pittsburgh West’ since the organization hired former Steelers offensive coordinator Ken Whisenhunt to be their head coach in 2008. He was succeeded by two more former Steelers offensive coordinators in that post, oddly enough, most recently Bruce Arians, who briefly retired after the 2017 season.

Now it’s newcomer Kliff Kingsbury’s show, but the Steelers still brought Pittsburgh west with them anyway, and it was a palpable presence during Sunday’s game. Cardinals players were not thrilled about it, including David Johnson, who made a post on social media addressing it, quoting lyrics that reference being “surrounded by enemies”.

Initially viewed as a cryptic stab at the organization because of the fact that he has been reduced to a bit player, he had to clarify that posting later in the week and made it apparent that his real gripe—at least related to that particular instance—was with the overwhelming presence of Steelers fans at the game, saying that it was inspired by a photo he’d seen of Pittsburgh’s following.

The Steelers brought a comparable contingent of fans to their game earlier this season against the Los Angeles Chargers out on the west coast. In fact, that game might have been even more dramatic in terms of the disparity between those who were there to see the Chargers and those representing Steeler Nation.

Pittsburgh has two more road games coming up to end the season, but it’s unlikely they can mount a similar presence. In Week 16, Le’Veon Bell’s New York Jets will host the Steelers, and then they finish the year in enemy territory in crabcake country against the Baltimore Ravens.

They figure to need to win at least one of those two games, if not both, in order to make it into the postseason. A friendly crowd would not hinder those efforts, certainly.