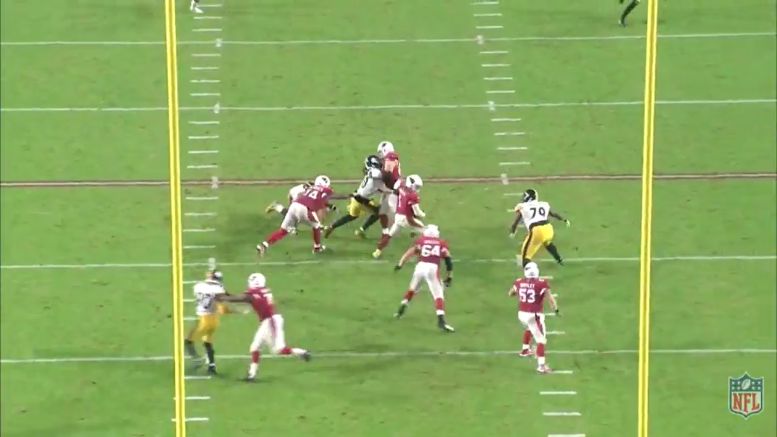 Topic Statement: Bud Dupree should have been credited with another sack on Sunday.

NFL officially scored this last sack a team sack and it will be interesting to see if @EliasSports ultimately changes it this week to give it to Bud Dupree. Look at this 4-man rush swarm. #Steelers pic.twitter.com/7ehY2fm1fP

Explanation: Fifth-year outside linebacker Bud Dupree has recorded a sack in three straight games now, three and a half in total during that span. Toward the end of Sunday’s game, the Steelers earned a ‘team’ sack when Kyler Murray fumbled the ball scrambling away from pressure. He recovered the ball and Dupree tagged him down.

The notion of a ‘team’ sack is absurd. The ground can’t sack a quarterback. If he is sacked, it’s because somebody caused it. If there was no cause, then he simply fumbled and it’s not a sack. So the fact that the official scorer charged it as a sack means that somebody sacked Murray.

Dupree was the player who forced Murray to scramble and cut to his right, grabbing a bit of his jersey before he was able to escape, stumbling, and ultimately losing the ball as he was trying to pull his throwing arm back from across his body.

It wouldn’t be the prettiest or most impressive sack in the world, but everyone knows statistics matter, especially for milestones. This would give Dupree 10.5 sacks on the year, a big landmark on the eve of potentially hitting free agency.

First thing’s first, which is that there is an argument to be made for a ‘team’ sack. If there isn’t any one clear player who deserves credit for a sack, and yet it is apparent that the quarterback was sacked—generally, because he fumbles while fleeing pressure after being touched—then a ‘team’ sack is the most logical attribution. This happened within the past few years against the Cleveland Browns as well.

Then there’s the matter of the nuances of the play. If you actually watch carefully, it’s Javon Hargrave who last touches Murray before he fumbles. The quarterback has to run through his arm, in fact. That Dupree tagged him down after he fumbled is irrelevant, because that is a separate play and statistic. If anybody should be credited for the sack, it’s Hargrave for being the last defender to influence the sack.