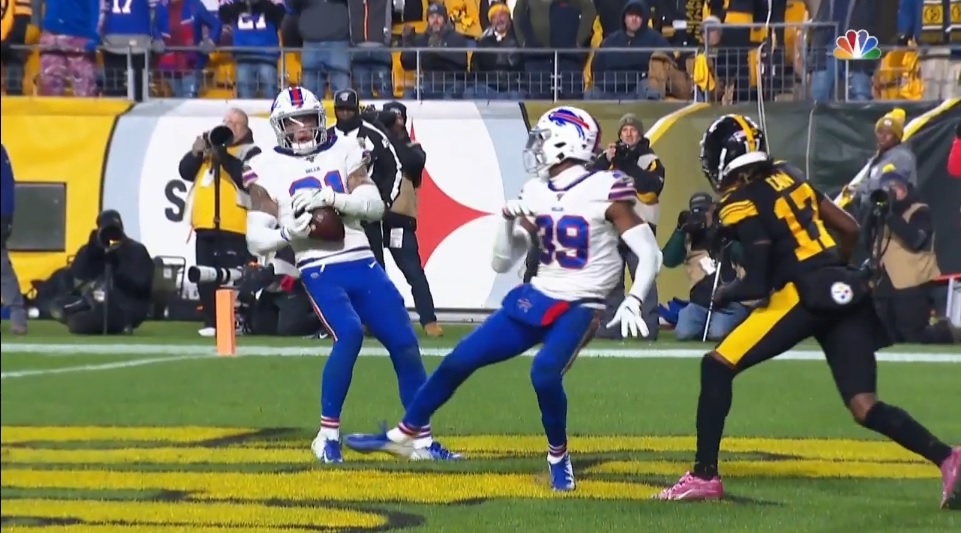 Were you surprised by how well the Buffalo Bills defense played against the Pittsburgh Steelers on Sunday night? Then perhaps you haven’t seen them play much football this season. In spite of the fact that they have had a relatively easy schedule, their defense has kept them winning the majority of the time, and has carried them into the postseason.

That said, Devlin Hodges also helped them out a fair bit. Not only did he allow four passes to be picked off, and not only did he drift into pressure on multiple occasions, as it turns out, comments that he made fueled the Bills as something that they took as a slight.

“I was quiet all week”, said Shaq Lawson. “I was quiet all week. I was gonna wait until the game to talk my junk. I had to say some words to him. I said, ‘Duck, Duck, Goose’. Just letting him know. You only start three games or however many games you start, you can’t go out there and just talk junk like that, bro”.

“He said we’re a normal D”, he went on. “A normal D got, what, five turnovers, how many sacks? So, that’s just not a normal D. We came out here and wanted to show and earn people’s respect. We came out on Sunday Night Football”.

Devlin Duck Hodges apparently called the #Bills “just another defense” this week. I didn’t hear it. But the Bills did.

Shaq: “I was quiet all week. I had to say some words to him.
I said ‘Duck, Duck, Goose.
You can’t just talk junk like that.”#Billsmafia pic.twitter.com/AytmnoyUpp

First thing’s first. A defense getting five turnovers against a rookie undrafted free agent essentially fourth-string quarterback is not exactly the most impressive thing in the world. Doing that against Devlin Hodges in his fourth start isn’t the same as doing it to Russell Wilson or something.

More importantly, however, there’s not a damn thing wrong with what Hodges said about their defense, but of course, people are going to take things however they will as long as it fuels them. It’s a time-honored tradition, not just among athletes. But here’s what Hodges actually said.

When asked if the Bills defense was the greatest challenge he’s face, he said, “yeah, it is, but for the simple fact that it is the only defense we face this week”. He added that the Bills “are a good defense. We have played a lot of good defenses”.

He continued, “when you can average turnovers a game, that helps your football team win football games. They are just a solid group. They have really good players all around. I don’t know if they do anything that is just special, it’s just one of those solid, solid defenses that comes each and every week ready to play”.

But it doesn’t matter now. The Bills got their fuel, and maybe that helped fire them up to play as they did. It doesn’t change the outcome to correct them in hindsight.