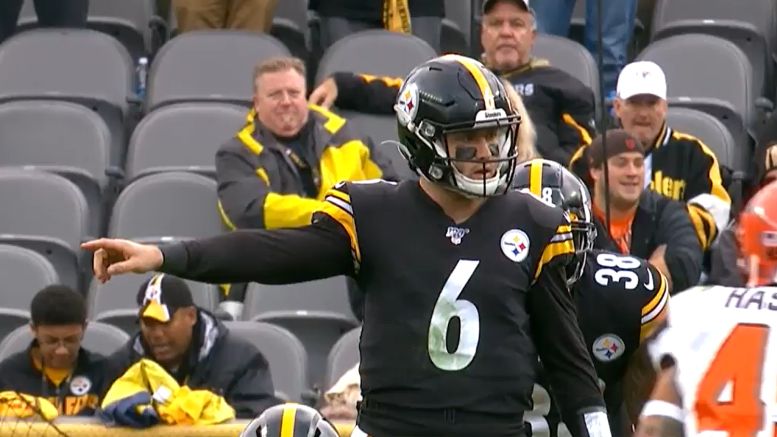 Yes, we’re obviously going to start with Devlin Hodges. From unemployed to winning quarterback of record, life has sure come at him fast over the past few months, but in a good way. And currently there is no reason to believe that he will not get another opportunity next week to start.

By season’s end, it’s quite possible that Hodges will have started six games as an undrafted rookie. He has already started two, and won two. That doesn’t necessarily mean that he was a stellar performer at every turn in those games, but he certainly did enough, especially with the defense playing at a high level, to win.

Though the defense didn’t get off to a hot start. Cleveland was able to control the time of possession for the first quarter and a half, but the Steelers started to pick things up with a jolt of life on a free play, with Hodges hitting James Washington for the first of four big catches on the day.

None of the four were bigger than the 30-yard touchdown at the end of the first half. A defensive pass interference on the Browns made the catch a lot harder than it needed to be, so Hodges deserves credit for the throw itself, which probably would have been a pretty easy score in traffic.

It was one of three plays Hodges hit for 30-plus when looking the second-year receiver’s way, as Washington clearly emerges as his top target. He struggled working with Diontae Johnson, with both sharing some of the blame in that relationship, but there is time for it to develop.

Meanwhile, outside of a few decision-oriented and awareness-based things, Hodges did a very good job of avoiding putting the team in negative situations. And I don’t mind the times that he did, because he’s the type of person who is going to learn from them, something I thought was reflected in his post-game comments.

As Mike Tomlin said after the game, he did enough to start another week, even though the head coach wouldn’t officially announce that just yet. And that’s enough for now. We’ll take it week by week.