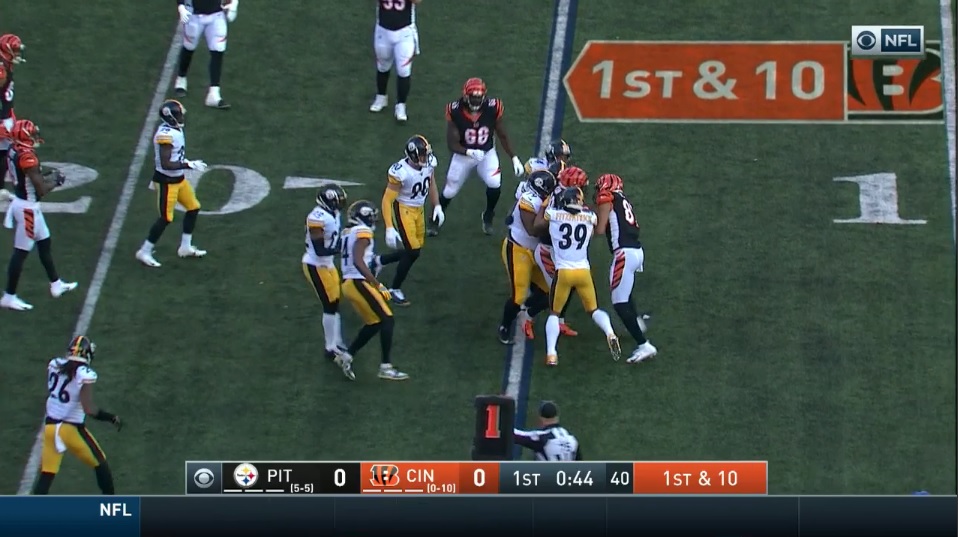 Listen to any conversation about Minkah Fitzpatrick this year and it’ll revolve around his playmaking. As it should be. This was a Pittsburgh Steelers’ defense starving for big plays and he’s exceeded expectations for the number of splash moments he’s had, including a critical fumble recovery in Sunday’s win over the Cincinnati Bengals. He’s the best Steelers’ safety since Troy Polamalu.

But my favorite play from him this year? A two yard run by the Bengals Sunday. I mean it. I got more geeked up about this one than any other play he’s made this season. I’ll tell you why.

Fitzpatrick is more than just a highlight reel. A lot of safeties can make plays on the ball. That’s natural, that’s instinctual, that comes with the job (insert your Terrell Edmunds joke here, I know). He’s a complete player. Tackler, run defender, consistency, football IQ, effort. The dude has it all.

And he’s only 23, playing his second year of football. Blows my mind.

Here’s an example of what makes him that complete safety. Tweeted it out yesterday, worth sharing with all of yinz on here. First half from this weekend. One of the rare times Fitzpatrick’s lined up in the box. Takes on the block from pulling center Trey Hopkins, cuts his legs out, and gets Devin Bush free and unblocked. As Bush tries to get Joe Mixon to the ground and a couple other Steelers join in, Fitzpatrick gets back on his feet after just taking on a 300 pound linemen and helps finish the play.

Minkah Fitzpatrick is such a complete player. We talk a lot about the INTs, the big plays. But I love his physicality. His effort. Takes on the pulling center, frees up the LB, and THEN gets back on his feet and in on the tackle. Special dude. Only in his 2nd year. Incredible. pic.twitter.com/Ul5cxHfLYQ

It results in a measly two yard gain on 1st and 10, a successful run stop for the defense.

The interceptions, breakups, coverage ability? All of that is great. It’s vital. It’s why the Steelers traded a first round pick for the first time in 52 years to get him. But I get just as excited about these plays. The ones you make when no one is going to watch, notice, the ones that won’t show up as a box score feather-in-your-cap.

Fitzpatrick’s proven he’s a team-player, willing to do the dirty work and let the interceptions be the reward. He’s bought into the system, getting to play free safety on a much more consistent basis, and has been everything – and then some – the Steelers could’ve ever hoped for.