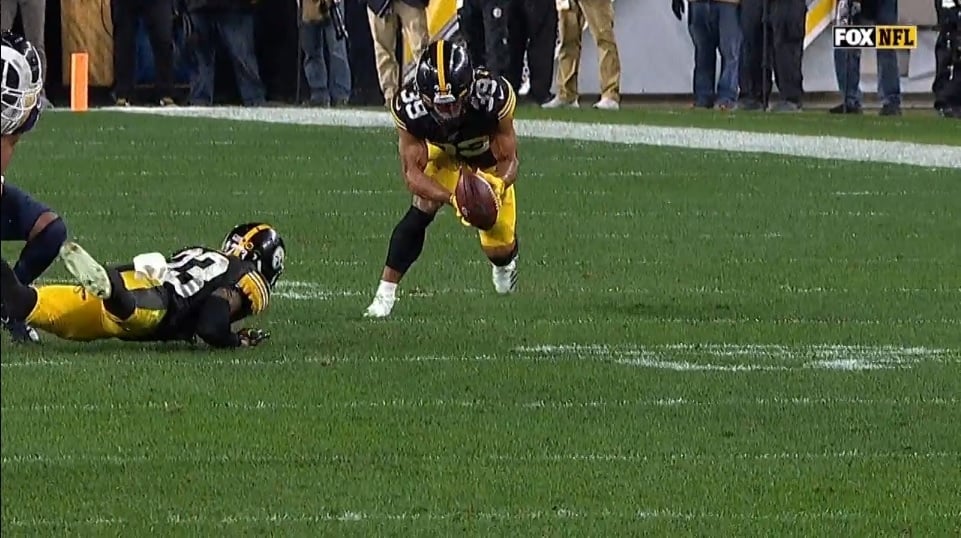 1. Pouncey Wound Up – Maurkice Pouncey seemed a little hyped up early in the game. He had a couple of bad snaps early, one high that led to the Rams defensive touchdown and one low shortly after. He had some trouble with shotgun snaps earlier in the year vs the Los Angeles Chargers so maybe it’s an LA thing. Those are going to happen but the difference today was the velocity. Both of them were fired back to the QB at a high rate of speed. Maybe he was thinking about Aaron Donald and Michael Brockers and was rushing it a bit.

2. Gotta Get Looser Sooner – We’ve all noticed that Mason Rudolph has had some slow starts and I wish I had a definitive reason. What I saw today was someone who looked stiff, mechanical. It wasn’t until probably the James Washington touchdown, where he stepped into the pass and put some heat on that he started to look comfortable. Players all have their routines before the game to get loose and they are creatures of habit. I’d ask Rudolph to let a couple fly during warm ups.  Just a couple 15 yards passes with velocity. Maybe that’ll loosen up all the muscles and get him going earlier.

3. In and Out – We saw some changes at punt return with Diontae Johnson getting some opportunities returning 3 for 22 yards. He did have the fumble when he was trying to do too much but it’s hard to fault someone for effort. Everyone had to think a change was coming including Ryan Switzer.  He just wasn’t producing much when he had chances to return. Today he decided to go East and West at his own five pinning the Steelers back which later led to a safety. I don’t think the change will be permanent (yet) because the trust isn’t there but the writing is on the wall.

4. Hot Potato – Randy Fichtner has had his struggles with play calling. Rudolph has had his struggles with accuracy.  We all struggle from time to time but if I understand the game correctly when someone throws you the ball you’re supposed to catch it. By my count there were 6 drops, 2 each for Johnson and Vance McDonald and one for JuJu Smith-Schuster and Jaylen Samuels. This team has a small window to be successful on offense right now and can’t have this happen.

5. Cut it in Half – This team, for all they have been through this year, is close. They’re close to being a team that the other teams won’t want to play.  The defense has been very good and the offense has spurts while the special teams have been subpar but the team needs to cut down on the mistakes. I just mentioned the 6 drops there were also 4 fumbles and 13 penalties many of which are pre snap penalties. The difference between being good and being great is paper thin and it comes down to discipline. No team will be perfect but cutting the mistakes in half would go a long way. They must tighten it up.

6. Where is #13? – There was one play in particular that caught my eye that had me asking where is #13? It was a third and 2 play at midfield and the Steelers are in 11 personnel with Juju, Johnson, Switzer and McDonald as the receivers. Rudolph and Washington are really starting to show some chemistry and he’s not on the field on third down? Rudolph ended up scrambling back to the line of scrimmage. When the Steelers find something that works they’ll usually run it into the ground.  Ride the hot hand with Washington when it’s there.

7. Picking and Choosing – I apologize for being the one bringing up penalties when there was 23 accepted in the game but the referees missed so many it’s shocking. I saw Bud Dupree get tackled twice by the left tackle and another offensive lineman hugging J. Watt in a very short period of time. Don’t get me wrong I’m not asking for more flags but I wonder why some are called and others aren’t.

8. No Coop for You – Got to give some well-deserved applause to the defense. Another defensive touchdown, 3 points allowed, 4 sacks, 3 interceptions, shut out Cooper Kupp and broke up 13 passes. Is that high? It seems high. They seemed very aggressive going for the pass break up with several of them going full Superman to make the play. Joe Haden had maybe his best game of the year and he led the way with 5. They had to come up big several times and stepped up every time.

9. 1 Yard – I don’t know the answer to this but is there any other fan base that has to wonder on second/third and one what kind of garbage are they going to scheme up this time. It’s one yard. This coaching staff has an aversion to doing a quarterback sneak for fear of injury but has no problem running the QB on a naked bootleg to get him smacked in the face and knocked to the ground from a higher height. It’s one of the most successful runs in the game. I don’t get it.

10. Break it to Me Gently – I’m sure my mind makes it worse than it really is but I feel this team too often gets the short end of the stick when it comes to close calls. It was nice to see the team get multiple calls that could have gone the other way. I felt Washington’s touchdown, Minkah Fitzpatrick’s fumble recovery for a touchdown and Trey Edmunds fumble on the interception defending the fake punt were all plays that could have gone the other way. On another day, they might have. It was nice to get a few breaks.