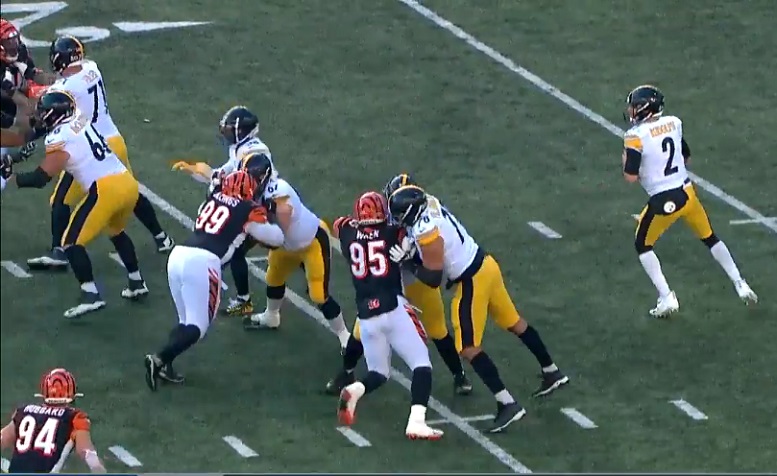 Sunday against the Cincinnati Bengals the Pittsburgh Steelers didn’t have starting center Maurkice Pouncey due to a suspension, so B.J. Finney had to make his third career start at the position in his absence. While Finney’s play on Sunday against the Bengals was far from perfect, it was more than adequate and on Tuesday head coach Mike Tomlin essentially said as much when asked to comment on the performance of the former undrafted free agent out of Kansas State.

“Man, Finney always answers the bell when called upon,” Tomlin said. “He’s just one of those guys that makes the catch phrase, ‘the standard is the standard,’ a reality. Whether it’s at center or a guard, over the course of his time here, when called upon, man, we don’t miss a beat, and such was the case on Sunday.”

The Steelers rushed for a season high 160 yards against the Bengals with Finney at center and while he did allow one sack to defensive tackle Andrew Billings during the contest, overall, he played good enough in pass protection. Additionally, while a few of his shotgun snaps were a bit off the mark, none of them seemed to cause any issues.

With Pouncey still having one more game left to serve of his suspension, Finney will now prepare to start Sunday at home against the Cleveland Browns and he’ll do so with quarterback Devlin Hodges starting behind him. Another decent showing on Sunday by Finney against the likes of Browns defensive tackles Sheldon Richardson and Larry Ogunjobi would certainly help increase the offensive lineman’s future free agent market value with just four regular season games left to be played.

Finney has never made back-to-back starts at center during his NFL career so it will be interesting to see if the quality of his play increases some Sunday against the Browns because of that. Finney will once again be backed up at center by another former undrafted free agent, Patrick Morris, who was promoted from the Steelers practice squad last week to replace the suspended Pouncey on the 53-man roster.