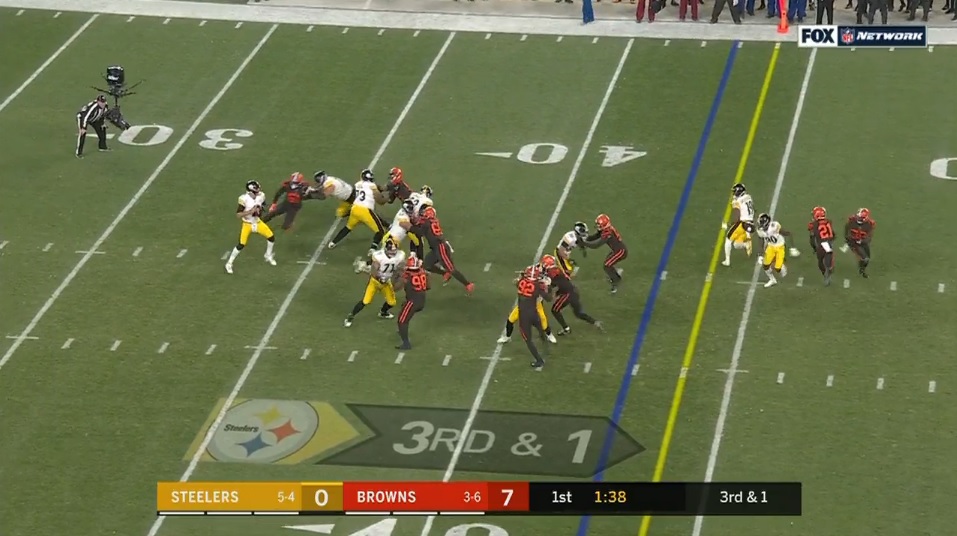 As we wrote yesterday, there’s no team in football worse on 3rd/4th and 1 than the Pittsburgh Steelers. The fact they’re as successful on third and long (27%) as they are on third and short (28%) is, frankly, baffling, and speaks to the struggles the offense has endured throughout the entire season, even for the brief time Ben Roethlisberger was healthy.

Asked about those problems during his Tuesday press conference, Mike Tomlin chalked it up to a unit-wide execution failure.

“We realize that short yardage has been an issue for us,” Tomlin said. “There are a couple ways to approach it. Number one, we have to execute better. There’s a certain meat-on-meat or bone-on-bone element of football that you can’t run away from and short yardage is one of them, but at the same time we can do some things from a coach’s perspective from a planning and schematics perspective to assist the guys as well. And I think we’re working in both areas.”

In Week 1 against the New England Patriots, they were 0/4 in those situations, including a critical 4th and 1 drop by Donte Moncrief near the end of the first half. They went 1/1 against Seattle, a long Benny Snell run, before falling back to go 0/2 versus the Cincinnati Bengals two weeks later.

Their shortcomings in situational football reappeared on Thursday, the offense going 1/5 on 3rd/4th and 1. The only conversion came on a Mason Rudolph QB sneak. That included repeated failures late in the game, like Rudolph missing a wide open Johnny Holton, who could’ve scored on this play, but resulted in an incompletion and turnover on downs.

While Tomlin mainly kept the issues broad, he pointed out not being able to use cadence as effectively on the road, the team’s two biggest in-game failures, Cleveland and New England, have been road games, is an obstacle. Especially with a young QB like Mason Rudolph, who doesn’t use it as much of a weapon as say, Ben Roethlisberger.

Still, the Steelers flat-out have to do a better job. The numbers are not only unacceptable, they’re bordering on record lows. If the offense can’t get a yard in a “gotta have it” moment, it’s hard to expect them to do much of anything else.