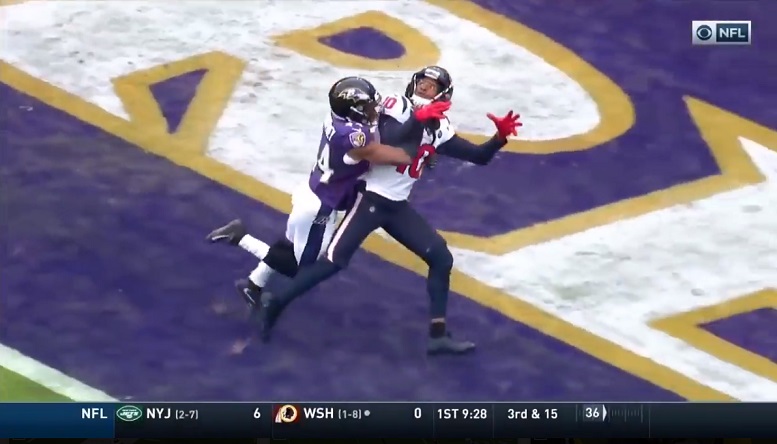 Week 11 of the NFL regular season included a few pass interference challenges that quite a few fans and analysts believed should have been won by head coaches. One of those unsuccessful challenges took place in the Sunday game between the Baltimore Ravens and the Houston Texans.

On the play in question from that Sunday game, Ravens cornerback Marlon Humphrey seemingly interfered with Texans wide receiver Deandre Hopkins in the end zone. After no penalty was called on the play, Texans head coach Bill O’Brien challenged that defensive pass interference should have been called. However, after Al Riveron reviewed it in New York, the non-call on the field stood.

“I have no idea what pass interference is any more,” O’Brien said at his postgame news conference. “No idea.”

Even Hopkins commented on the failed pass interference challenge after the game was over.

“Everyone saw it,” Watson said after the loss. “The guy wrapped him around. But they didn’t make that call. You’ve got to live with it. You can’t really dwell on it. [But] it definitely could have been a changing point of the game, a momentum switch. But it’s just one of those calls that it didn’t go our way and you’ve got to continue to push forward.”

Even former NFL head coach and current NBC analyst Tony Dungy tweeted out his disgust not too long after the Riveron made his ruling in the Ravens versus Texans game.

“We had another example in the Houston-Baltimore game of the NFL office not overturning a terrible non call on Pass Interference,” Dungy tweeted. “Houston should have had the ball at the 1 yard line. This is getting ridiculous.”

All of the uproar about that particular failed pass interference challenge in the game between the Ravens and Texans prompted Kevin Seifert of ESPN to write Sunday night that NFL head coaches should stop challenging pass interference calls and non-calls moving forward.

“Coaches have now lost 32 of their last 33 pass interference challenges, dating back to the start of Week 4,” Seifert wrote. “That’s a three-percent success rate. Since Week 3, they are 2 for 41 (4.9 percent). In an age when teams have access to all kinds of analytic probabilities, their coaches should now realize the chances of getting an overturn on pass interference — no matter the severity of the contact — are slim.”

On Tuesday, Steelers head coach Mike Tomlin was asked if all the failed pass interference challenges has in any way affected his own process when it comes to challenging such calls and if he knows why it’s seemingly so hard to get one of those kinds of challenges overturned.

“It really has not affected my process,” said Tomin, who is on the NFL’s competition committee and thus played a role in the temporary rule change that allows for pass interference calls and non-calls to be challenged this season. “I think that’s what I anticipated is that, you know, people weren’t going to have a great deal of success.”

Tomlin was then immediately asked why he thinks it’s so hard for pass interference challenges to result in overturned calls or non-calls.

“Because I just think the initial rule, the intent of the rule, was to change the catastrophic play, the plays that called the credibility of the game into question,” Tomlin said. “And I think that was the bar. The bar was extremely high and that was made very clear in the spring. I think early in September that bar moved a little bit and so we all started challenging a little bit more than we initially anticipated. But once that bar got back to where it was intended, I think we all need to fade away from the challenges. I know that I have.”

Tomlin saying that the bar moving in early September must be a reference to the fourth quarter play in the Steelers Week 2 loss to the Seattle Seahawks. The Seahawks challenged a non-pass interference call in that game and after reviewing a penalty was issued. If you forgot that play, it’s below for you to relive.

At this point it’s way too late to put the toothpaste back in the tube. Fortunately, this rule wasn’t made permanent and hopefully it gets reversed during the offseason. Personally, I wouldn’t risk a challenge on pass interference if I were an NFL head coach moving forward into the remainder of the season unless I were challenging something that involves the Steelers. It doesn’t sound like Tomlin plans on challenging anything related to pass inference the remainder of the season and you can’t rightly blame if that’s indeed what ultimately happens.