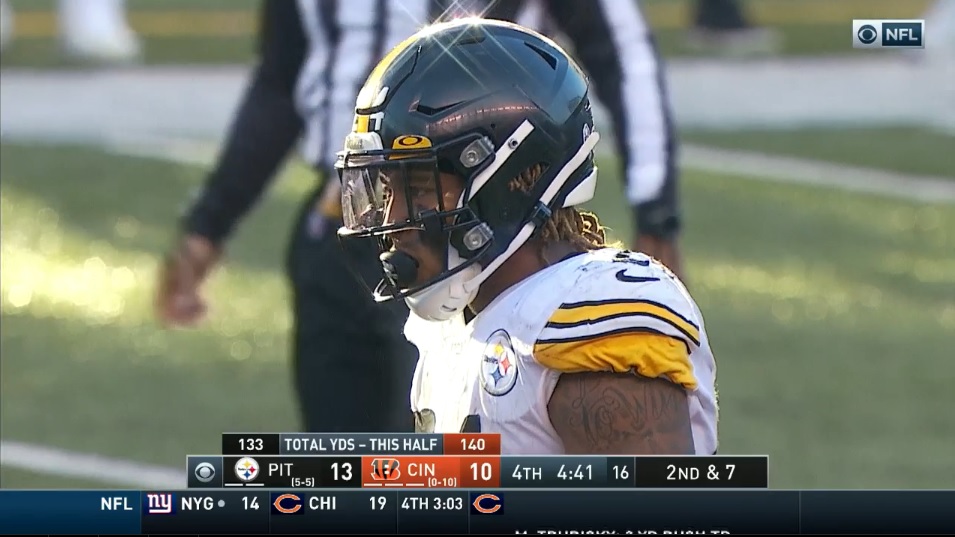 That was Mike Tomlin’s reaction to the rookie’s 21 carry, 98 yard performance in Sunday’s win over the Cincinnati Bengals. Seriously. You can hear him yell it towards Snell at the end of the game.

Mike Tomlin with the cameo in James Washington's post-game interview.

I humbly suggest every movie from now on includes a scene of Tomlin walking in the background, yelling out “Benny Snell Football!” offscreen. And then rake in the Oscars.

What does Benny Snell Football mean? Run hard, run tough, and embrace being the “guy” to close out games. That’s what he did at Kentucky. And he wrote a similar story versus the Bengals. In Tuesday’s press conference, Tomlin praised the effort.

“Can’t say enough about the contributions of Benny Snell coming back off of a knee injury,” he told reporters. “Young guys coming off of an injury and performing to expectations is a really good thing. And I thought did he did that. I thought he was a catalyst for some positivity in the run game along with others.”

He later characterized the performance as going “above and beyond our expectations.”

Snell had missed the past three games coming off minor knee surgery to repair an injured meniscus. Knowing how he’d react to his first game back was a mystery. To the team, since this is the first injury he’s suffered as a Steeler, but to Snell himself. He never missed a game in college.

But Sunday, he didn’t miss a beat. As we wrote this morning, Pittsburgh leaned on its gap scheme for success in the run game. Ten of his 21 carries came with a guard pulling in front of him, averaging 4.6 yards on those plays. That included a 13 yard run to secure the victory.

In typical Tomlin self, he didn’t commit to a running back rotation moving forward, though hinted at confidence in turning to Snell again.

“It was last week,” when asked if the rotation will remain the same. “It’s no indication of where we’re going to go this week. We’ll assess our availability and a level of comfort with that availability. It was difficult to plan a week ago because we just don’t have a lot of shared experiences with Benny Snell. And so yes, he was healthy, but was he going to perform? We just didn’t know. I think anytime you step into a stadium with a young guy, you learn something about him. And I think we learned a lot about Benny Snell by the way he performed coming off of that injury.”

Based on that positive performance, Snell figures to be the team’s leading rusher again. James Conner almost certainly won’t suit up while Jaylen Samuels and Trey Edmunds have struggled to find their footing in the run game. They’ll look to find a lot more success against Cleveland than they did two weeks ago. That day, they ran for just 58 yards – 15 of those coming from Mason Rudolph – and looked lost after Conner aggravated his shoulder injury and missed most of the game.