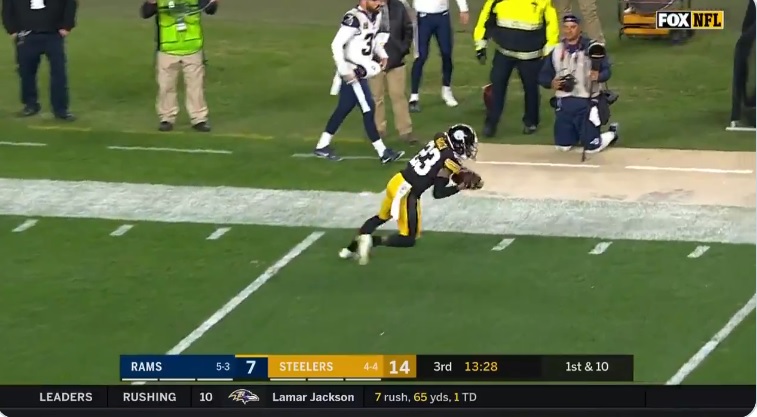 Winners and losers from the Pittsburgh Steelers 17-12 win over the Los Angeles Rams.

Mason Rudolph: I know the stats don’t show it and this might not be popular but Rudolph played well today. Gave his receivers plenty of chances to make plays. They didn’t always come through, something you’ll read about in the Losers sections. He was accurate, especially over the middle, and his decision-making was largely sound against a tough Rams’ pass rush that can rattle a lot of young QBs.

TJ Watt: You can practically put the entire Steelers’ defense on here and you wouldn’t be wrong. But I’ll name some of the standouts of this excellent group. Ho-hum, another sack from Watt, and he got constant pressure throughout the game. Entire pass rush of him, Bud Dupree, Cam Heyward, and Javon Hargrave made big plays.

Javon Hargrave: Worth shouting Hargrave out for the pressure/forced fumble he created on the Fitzpatrick touchdown. Just a consistently excellent game. Well on his way to a monster payday in the offseason.

Minkah Fitzpatrick: Another TD for Fitzpatrick, whose done it in back-to-back weeks. Relatively easy score picking up a loose ball and running it in but great ball awareness is a skill. And he’s got it in spades. Kevin Colbert robbed the Dolphins.

Joe Haden: Haden got in on the INT fun, recording his first INT of the year. Great read and finish on the football, coming off his man to find the ball and high point it for the score. Two breakups too, including the game-clinching INT for Fitzpatrick. Defense has just been amazing. The rock of this team.

Danny Smith: I’m sorry I ever doubted you. Smith was ready for the Rams’ punt fakes today. On the first, the Steleers checked correctly and forced LA to take a delay of game penalty. On the second, Johnny Hekker attempted the fake but it was well-defended and picked by

Jordan Berry: Continues his career year. We’ll see how things look when the weather gets bad, it was actually pretty nice in Pittsburgh in mid-November but a solid output from him. 58 yard net on his first punt was a beauty. Even the last punt, that I know didn’t go very far, offered no chance of a return, which is what you’re really looking for in that moment. There might have been a poor snap on a field goal he was able to salvage too. Will have to go back and check.

Mike Tomlin: For taking this Steelers’ team on the brink of elimination, a 1-4 team on the road with Devlin Hodges, to 5-4 and right in the AFC playoff hunt. His 4th and 1 decision to go for it was gutsy, and honestly, probably should’ve failed with how messy it was, but still, turned out to be the correct decision.

Receivers Hands: This game was littered with drops and ball security woes. Steelers had at least four of them: Diontae Johnson, JuJu Smith-Schuster, Vance McDonald, and Jaylen Samuels. TE Nick Vannett had a drop early in the game that was negated by a Rams’ penalty. James Washington had a fumble at the end of a long run while Johnson put the ball on the turf on a punt return, recovered by Vince Williams. Ugly, ugly fundamentals.

Randy Fichtner: Make no mistake. As bad as the player execution issues were, the OC did them no favors. Running on 2nd and long, including a TE draw to McDonald (why?) and at his worst, a playaction sending his QB into his own end zone that resulted in a safety. Players nor coaches helped out today.

Maurkice Pouncey: Pass protection was generally good but Pouncey’s snap issues have continued. Of course, you know what play I’m referring to. First possession of the game, ball goes over Rudolph’s head and returned for a touchdown. Steelers’ beating Steelers.

Robert Spillane: Never good when a backup LB finds himself on this list. Spillane had the tackle on the Steelers’ first kickoff but flagged twice on the punt coverage team. Not good.