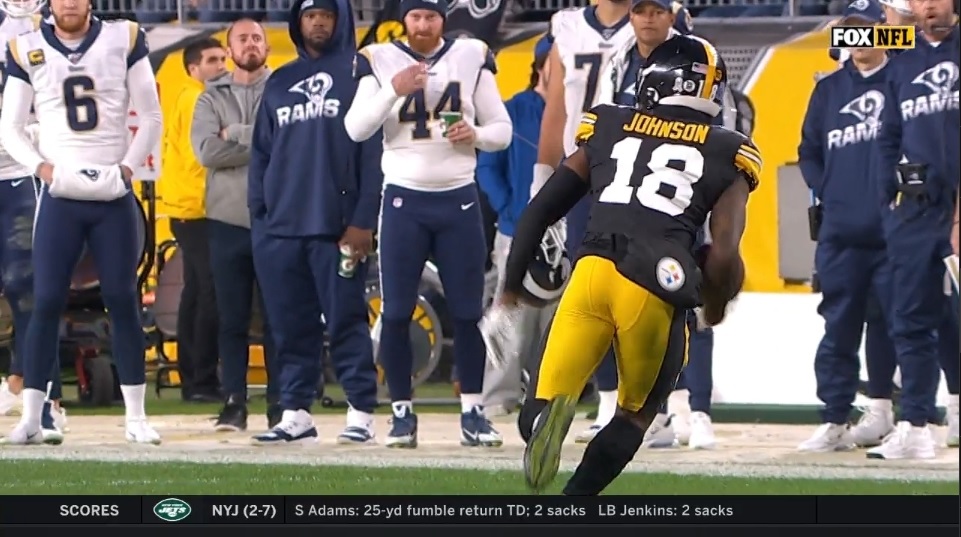 Devin Bush/ILB – Devin had his least productive game of the year recording just 3 tackles but you can point to usage over the level of his play as a cause for this. He played just 45% of the defensive snaps vs the Los Angeles Rams. The personnel groupings led to Mark Barron being the linebacker on the field most often. Bush’s lowest usage before this game was 76% in week one.

He made a couple plays vs the run including chasing Todd Gurley out of bounds for a 4 yards loss to help hold the Rams to a field goal. In coverage, in case you didn’t notice, a lot of his work was vs receivers like Cooper Kupp and Robert Woods and did a heck of job. He was also in good position in coverage on the wheel route that was intercepted by Joe Haden.

Diontae Johnson/WR – Diontae had another good game and it could have been better.  He ran a lot of shallow routes early and made two nice plays on crossers. His best route was on a third and 7 in the first quarter where he fooled the DB and was wide open for his biggest gain. He probably should have had a touchdown on the pass interference call against Jalen Ramsey. If Mason Rudolph had gotten the ball off cleanly he had Ramsey beat easily for a deep TD. He had a drop on a Dig route which was a little out in front of him but I thought he could make the catch.

He got some looks on punt return and did a nice job on 2 of the 3 returns.  He got north quickly and got what was there for him. The other return was pretty bad all around.  When he caught the ball there wasn’t anyone within 10 yards of him and went side to side a couple times, only gained one yard and fumbled. That was nearly disastrous and needs to not try to do too much.

Here is the 30 yard gain by Johnson (18). He uses an outside release and starts to break behind the DB. The DB has safety help behind him so he undercuts the route and turns back to the QB. Johnson hits the breaks getting him open for an easy catch.

Justin Layne/DB – With a lot of injuries, Layne got a helmet this week and saw minimal action getting in three special teams plays as the gunner.

Isaiah Buggs/DL – Isaiah got some work in the defensive line rotation again this week with 11 snaps on defense.  He’s a strong player and like last week was able to shed an offensive lineman with ease and I thought he was going to get his first assist on a tackle but there was a holding call on the play. He did get some pressure on the Haden interception using a bull rush. He’s coming along nicely.

One critique would be he needs to get off the ball quicker.  He’s a little slow at the snap and with his strength could become more disruptive getting a quicker start.

Rookie on rookie rep with Buggs (96) vs OG David Edwards (73). Buggs gets his hands up under the shoulder pads and is able to toss Edwards to the outside to get to the ball carrier.

Tony Brooks-James/RB – Tony saw his reps go up this week from 3 snaps last week to 10 this week and his touches went from 1 to 6. He has more quickness than what we’ve seen from the other backs on the roster. He had two good runs called back by holding calls and had some room on another that he got tripped up by Maurkice Pouncey.  His stats were minimal and he’s very light but he is an intriguing player. He’ll likely go back to the practice squad this week unless they want him to return kicks going forward.

Good vision and decision making here from Brooks-James (40) seeing the front side penetration and making a cut back and showing good acceleration for a 16 yard gain. Too bad it was called back for a holding call on Al Villanueva (78).