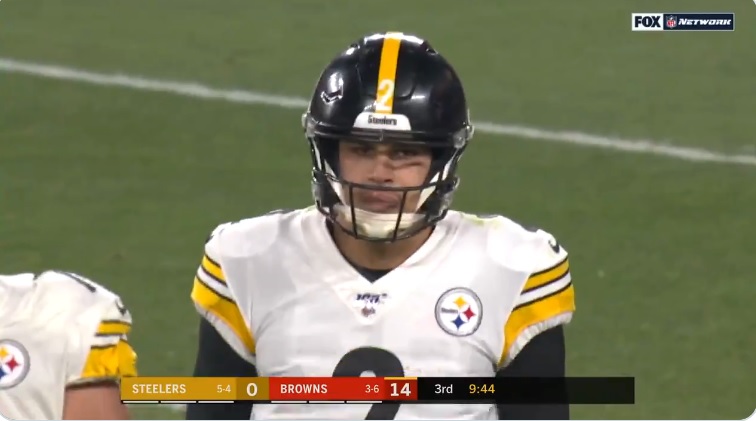 Winners and losers from the Pittsburgh Steelers 21-7 loss to the Cleveland Browns Thursday night.

Cam Heyward: Not a lot of winners here but Heyward was consistently excellent. Largely, the Browns’ run defense was held in check and his effort to chase down screens is among the best in football. Down-to-down tonight, one of the few players who didn’t seem to do anything negative.

TJ Watt/Bud Dupree: Stretching things a bit here, which tells you how depressing this game was, but at least both guys had their moments. Watt didn’t always keep contain, Dupree didn’t generate a whole lot of pressure, but Watt finished with a sack – the only one of the night by the defense – while Dupree’s run defense was solid. He finished with 2 TFL.

Alejandro Villanueva/Offensive Line: One of their worse games of the year, especially in pass protection, which is one of their strongest suits. Villanueva in particular was manhandled by Myles Garrett but Matt Feiler gave up one sack while Ramon Foster is probably going to be the one responsible for the Rudolph sack/fumble that helped knock the team out of FG range. Injuries didn’t help but the run game again went nowhere for yet another week, unless the Steelers hit Cleveland with a draw versus a light box on 2nd and long.

3rd Down Offense: Specifically, on third and short. You’d think teams would want to be in 3rd and short. Not this team. They’re literally the worst in football converting here. Highlighted, lowlighted, really, by the 3rd/4th and 1 failed conversions with the team driving in the fourth quarter. They finished the game 2-11 on 3rd down.

Mark Barron: Cleveland knew to go after him early. A third down conversion on their first drive, complete to Kareem Hunt. Throwing behind him in zone coverage, complete to Jarvis Landry later in the game. Barron also missed a tackle on a 3rd down giveup throw to Hunt, allowing Hunt to move the sticks.

And the TD he allowed to ice the game? Good luck finding a moment showing worse ball skills than that.

Why the team feels compelled to play Barron over Vince Williams, who can call a defense too, ya know, is beyond me. Maybe they’re just being stubborn for paying him money in the offseason. If the team is smart, Barron won’t be on the roster come the offseason.

Return Game: Which was bad…again. No running room for Tony Brooks-James, who averaged an ugly 16 yards on two kick returns. The punt return game wasn’t much better and Cam Sutton fielded a punt inside his own five, a play where I believe the Steelers had just ten guys on the field. Because no one bothered to replace Sutton, who normally functions as a rusher/jammer on the PR team. Good job all around, guys.

Run Game: Also bad…again. Losing James Conner early was a blow but the offense was getting Ramon Foster back against a bottom five Browns’ run D. Aside from that occasional draw when Cleveland sold out on the pass, they went nowhere. Coaches had no trust in running in short-yardage situations either, the biggest indictment of this group.

Mason Rudolph: No, the line didn’t help and he was throwing to a glorified preseason roster. But Rudolph’s pocket presence waned again, he missed too many easy throws (a 3rd down mesh concept to JuJu, comes to mind) and couldn’t get off his head to hit a wide open Holton on 4th and 1, leading to a hurried throw and turnover on downs. Teammates didn’t help him and he didn’t help his teammates. Simple as that.

Things unraveled at the end and he finished with four interceptions, shrinking as the game went on.

Mike Tomlin: Steelers simply weren’t ready. And the buck stops at the head coaches door. Really nothing more to say than that.

Johnny Holton: He may never catch a pass. (ok he did, I wrote this before then, but still, it took a lot of doing for that first grab)