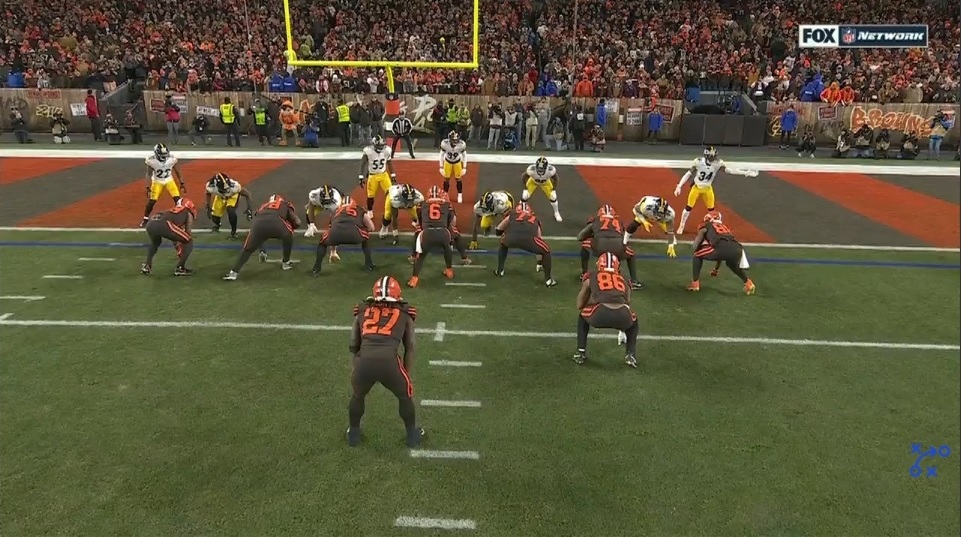 Looking to extend their winning streak to 6 games, the Pittsburgh Steelers came out incredibly flat on the road Thursday night and dropped a disheartening 21-7 decision to the host Cleveland Browns.

While the loss stung, the overall impact of the game was more than just a mark in the loss column as Mason Rudolph regressed in a big, big way, while JuJu Smith-Schuster, Diontae Johnson, and James Conner all exited with injuries offensively, leaving the Steelers perilously thin at the skill positions.

Defensively, the Steelers weren’t able to carry the load this week, failing to force a turnover for the first time in weeks. However, it was still a strong showing defensively, aside from a couple of explosive plays that allowed the Browns to strike.

The good news is that it counts for just one loss, and at 5-5 with 10 days off to prepare for the Week 12 matchup with the Cincinnati Bengals on the road.

Let’s get to some games and start the process of moving on.

What a bad, bad game for Rudolph. It comes just 4 days after it appeared that Rudolph took a major step forward against the Rams at home. Now, it’s one step forward, three steps back for the second year signal caller.

Rudolph looked shaky in the pocket again, sliding into pressure while also backing up and throwing off of his back foot quite a bit. His footwork in general was abysmal again, which led to quite a bit of misfires and the 4 interceptions thrown on the night.

For a guy that doesn’t have the strongest arm in the world, footwork is the most important aspect of his game, and when it’s off like it was Thursday night you’re going to get performances like that where balls were thrown behind receivers, floated over the middle, and thrown high up the seam.

The good news is Rudolph needed one of these games to really open his eyes and force him to get back to working on the fundamentals. He gets 10 days to let this one stew. I’m betting he comes out of this much stronger in his preparation and will look much better the rest of the year.

I love Conner with my whole being, but he can’t stay healthy, and with him unable to stay healthy and the running back depth chart looking pretty shallow, you get what we saw Thursday night.

Prior to exiting with a shoulder injury, Conner didn’t look too good. He couldn’t break tackles (Greedy Williams on the edge on the first snap) and couldn’t really get much going up the middle.

Jaylen Samuels is offering the Steelers nothing right now; he simply isn’t an answer for this team, and certainly is the farthest thing from the best back on the team, like a portion of the fan base would have you believe.

I did like what I saw out of Trey Edmunds Thursday night. He was passable in pass protection, had some success on the ground and consistently caught the ball out of the backfield.

Overall though, there were no playmakers in the backfield on the night and that severely hindered any idea of an attack for Pittsburgh.

Hey, Johnny Holton caught one! Well, he better have, considering he tied for the team-lead in targets with 7 on the night. That about sums up the Steelers’ wide receiver depth chart after Smith-Schuster and Johnson exited with injuries.

Holton did draw a pass interference penalty that set up Samuels’ 3-yard touchdown catch, but all he was really targeted on was go routes before catching a comeback route on third and 15 to move the chains late in the game.

James Washington looks strong again, at least to me, catching 3 of his 5 targets for 49 yards on the night. He’s certainly not a top-tier wideout at this point, but I think he’s a very solid complimentary piece to Smith-Schuster and Johnson in a competent passing attack.

Tevin Jones had a decent showing in his first career NFL game in the regular season, hauling in 2 passes for 24 yards. However, one of his 4 targets resulted in an interception by Morgan Burnett on an underthrow by Rudolph. I would like to see Jones get more run moving forward. He’s a big-bodied guy that can win consistently. I’m all for him getting more touches.

Man, Vance McDonald is having a rough, rough year.

Sure, he hauled in 3 passes for 33 yards Thursday night, but he’s not a threat after the catch and has really fallen off as a blocker. There’s simply no push from him overall as a blocker, and he’s tying things up as a pulling tight end.

Nick Vannett just isn’t giving the Steelers much at this point. One catch for 7 yards and general struggles as a blocker just isn’t getting it done right now.

Much like Rudolph gets an F for a dreadful performance, the offensive line gets an F as well for failing to consistently protect Rudolph and open up running lanes for the backs.

The offensive line allowed 4 sacks and an astonishing 11 quarterback hits on the night, while also rushing for just 3.6 yards per carry. I get that the Steelers essentially became one dimensional once Conner left with an injury, but for a unit considered one of the top lines in football, this was another dreadful performance.

Alejandro Villanueva and Matt Feiler really struggled as bookend tackles, while Ramon Foster was pretty clunky in his return to the lineup. Maurkice Pouncey also had a few low snaps that caused trouble.

I was really, really pleased with this unit Thursday night. They didn’t really let the Browns get a run game going.

Javon Hargrave and Cam Heyward finished 1-2 in tackles on the night as Hargrave recorded 9 tackles and 2 tackles for loss, while Heyward added 6 tackles and a tackle for loss. These guys dominated the line of scrimmage.

Tyson Alualu also had a whale of a game in limited snaps, recording 4 tackles and 2 tackles for loss. While the Steelers’ defense couldn’t get the turnovers it needed, the positive news is that the defensive line dominated in a game it needed to.

Mark Barron, much like Rudolph, took 2 steps back in his play on Thursday night. Barron was really solid against the Rams and then was absolutely dreadful Thursday night, struggling in the run game and was an abject disaster in coverage, allowing third-string tight end Stephen Carlson to dunk on him for a touchdown in the fourth quarter to put the game away.

Once again, Vince Williams showed he should be getting a lion’s share of the snaps over Barron. Williams was really good against the run and rushed the passer well. Sure, he’s a bit of a liability in pass coverage, but so is Barron. Play the better player.

Outside, TJ Watt and Bud Dupree had strong games against the run, but neither really made the impact as pass rushers that people were expecting heading into the game.

Watt and Dupree combined for 3.5 tackles for loss, but Watt was the only one to get to the quarterback, sacking Baker Mayfield once.

Aside from two quick strikes by Mayfield to Odell Beckham Jr. and KhaDarel Hodge that led to 83 of Mayfield’s 193 yards on the night, the Steelers’ secondary did a nice job containing Cleveland’s plethora of weapons.

Minkah Fitzpatrick didn’t come up with his customary turnover in the game, while Joe Haden and Steven Nelson were rather quiet.

None of the defensive backs were bad by any stretch, but this unit failed to force a turnover, which in turn really hamstrung the offense. Again, not their fault, just point it out.

A bad snap from Kameron Canaday resulted in a bad missed field goal by Chris Boswell. There’s no way I’m putting that miss on the Boz.

Then, the kick and punt return units were again abysmal. Tony Brooks-James had literally no blocking to work with on kick returns, while Johnson rarely had time on punt returns. Then, Cameron Sutton returned a couple of punts and fielded one at his own 3-yard line before then letting one bounce at his own 13.

The saving grace for special teams was the monster game Jordan Berry had, consistently punting the Steelers out of trouble. Berry averaged nearly 50 yards a punt Thursday night, out-punting “The Scottish Hammer” on the other side.