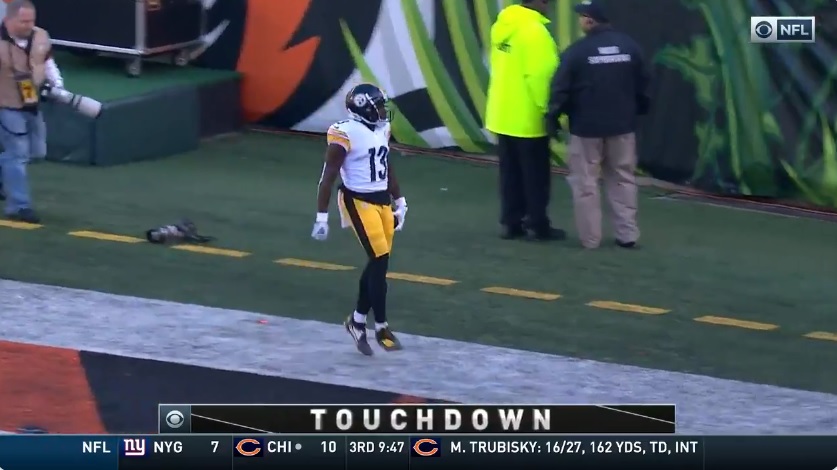 Winners and losers from the Pittsburgh Steelers 16-10 win over the Cincinnati Bengals Sunday afternoon.

Duck Hodges: I, for one, am thankful for Duck Hodges. The Steelers made the right decision to bench Mason Rudolph. Hodges immediately stepped in and stepped up,. Not afraid to push it downfield, he fired a 79 yard TD to James Washington on his third pass attempt of the game. Has the mobility and fearlessness the offense needed today.

Kerrith Whyte Jr: Lot of new faces putting their hand in the pile. Like Whyte Jr, who busted off a 21 yard run on his first career carry. Brings juice and explosion to a RB room utterly lacking it. Only question is why he didn’t see the field for almost all of the second half. Understand he’s limited by personnel groupings, he’s still learning the playbook, but he could’ve been used more than what he was.

James Washington: Washington was on the receiving end of the 79 yard score, fishing it with an impressive stiff arm and cutback into the end zone. Playing his best football right now. Numbers would look better if the offense hasn’t been stuck in neutral for most of this time.

Deon Cain: Cain made just one grab today but it was a nice one, adjusting over his shoulder for a 35 yard catch. He also drew pass interference against ex-Steeler BW Webb later in the game. Immediate improvement over Johnny Holton, not that the bar was set terribly high.

TJ Watt: Pressure was a bit too inconsistent for my liking across the board but Watt keeps making signature players. A sack, TFL, pass breakup on an attempted screen pass. Jumps off the page time and time again and gave Bobby Hart more than he could handle today.

Devin Bush: Wasn’t going to show up on this list but the forced fumble on Tyler Boyd was an obvious game-changer. He’s their best cover LB, even if he has a ways to go understanding route concepts and reading his keys. Steelers’ coaching staff has to understand that. He’s not playing in his first game anymore.

David DeCastro: Steelers’ front five wasn’t great today but their best runs came off their gap/power scheme with DeCastro leading the way. Pass protection seemed generally good too, though he got pushed into the pocket a bit on Rudolph’s INT.

Jordan Berry: It was a field position battle for much of the game, especially the first half. Berry was consistently solid, able to pin Cincy back. Hangtimes felt like they were some of his best of the year.

Johnny Holton: And credit Holton too but his coverage work today. Really, the entire kick coverage unit was excellent, holding the Bengals’ dangerous return man Brandon Wilson in check. Holton helped create a 60 yard net Berry punt, a season-best. Bengals ended up double-teaming him and Holton still made an impact. Justin Layne had a strong open field tackle, too.

Bud Dupree: Dupree wore down LT Cody Glenn, getting the crucial strip sack fumble – and recovery – late in the game. Huge, huge play and one that set a season high number of sacks. He now has seven.

Benny Snell: Know this list is getting long but Snell ran hard, tough, with smartness and most importantly, great ball security. Can’t overlook that. Just shy of his first 100 yard game (21 carries, 98 yards).

Chris Boswell: Specialists really helped win the day. 47 yarder – fighting some wind – was money. Boz has been the man this year.

Mason Rudolph: Yeah, he was terrible. Sure, he was without a couple weapons but he had ten days and faced one of the NFL’s worst defenses. Offense did nothing under him. Just looked lifeless and made me nervous every time he dropped back. Will he start next week? Hard to argue in favor of it.

Joe Haden: Rough game for Haden. Gave up a TD to Boyd, allowing too easy of a score, called for PI, and allowed a double-move on third down that should’ve resulted in a big play but missed thanks to a terrible throw by Ryan Finley.

Haden did have two breakups late in the fourth quarter, though at least one of those should’ve been picked, but the bad outweighed the good.

Terrell Edmunds: Edmunds lack of ball skills were again evident. Despite practically pulling Tyler Boyd to the ground, he still allowed a long reception to him. Just no playmaking, no splash. Good athlete, improved tackler, but you draft first round players to make significant impacts. He hasn’t.

Alejandro Villanueva: Going to have to wait for us to do our sack breakdown but Villanueva probably going to get charged with giving up two sacks. On the ground too often and he’s having a rough two weeks. Never a good sign when you let a DE like Carlos Dunlap, who is easily 6’6, bend under you.