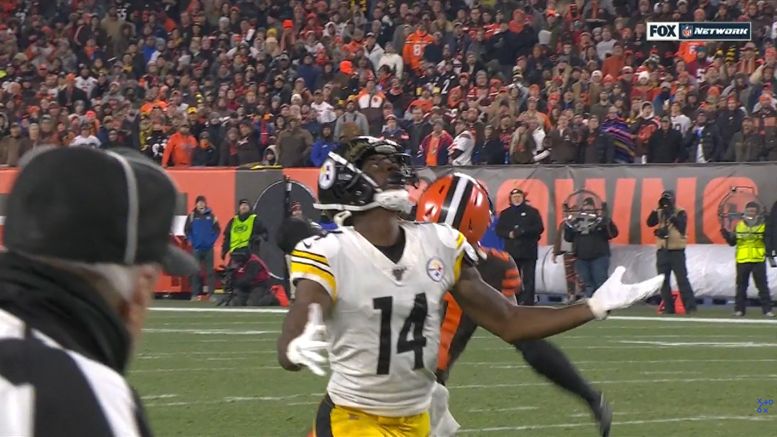 It is true that Mason Rudolph is coming off the worst game in his career. It’s pretty hard for that not to be the case when you throw four interceptions, which was what happened to him on Thursday night for the Pittsburgh Steelers, and this time, all four of those picks were on him.

He has to move forward, but as he does, he will have a somewhat unfamiliar cast of characters around him. While he’ll have his closest friend on the team, James Washington, along for the ride, JuJu Smith-Schuster and Diontae Johnson could be spectators, not to mention James Conner, even if Benny Snell is now working his way back.

So, outside of Washington, who will his top targets be? Johnny Holton, Tevin Jones, and Deon Cain. The Steelers just signed Cain, a second-year player, off of the Indianapolis Colts’ practice squad. Jones made his NFL debut on Thursday. Holton caught his first pass in Pittsburgh on Thursday.

What does this mean for Rudolph? That’s what we’ll have to find out. It’s not ideal when you’re a young quarterback going through struggles to have a bunch of nobodies you don’t have a lot of experience with as your top options, but that may be the direction we’re trending in for Sunday’s game against the Cincinnati Bengals.

Not that anybody thinks that will absolve Rudolph if he continues to struggle, something that head coach Mike Tomlin talked about yesterday during his pre-game press conference. “We are not looking for excuses”, he told reporters. “It is what it is. We are trying to win football games. We are presented with a set of circumstances or variables week in and week out, some of which we do not have control over”.

Such as watching arguably your top two wide receivers take illegal shots to the head and send them into the concussion protocol, as was the case against the Cleveland Browns on Thursday night. You can be mad about it, but it won’t change the circumstances.

“We do have control over our preparation and our readiness”, Tomlin said. “Ultimately, the execution is those available to us and so that is our focus. I am not trying to paint with a broad brush or seek comfort or trying to assess anything from a global perspective. We just really need to be focused on our prep and ultimately our play this weekend in an AFC North matchup”.

The Tomlinism all-timer up there notwithstanding—painting with a broad brush, seeking comfort, and taking a global perspective all at the same time is Pro Bowl form for him—he’s right about the situation the Steelers are facing.

It wasn’t so long ago that the Steelers were working with Cobi Hamilton and Demarcus Ayers as important weapons at wide receiver. Derek Moye’s got a touchdown to tell his kids about. Sometimes you need a faceless player to step up and make a play in a moment. Could that be Cain? Sure. It’s happened before.