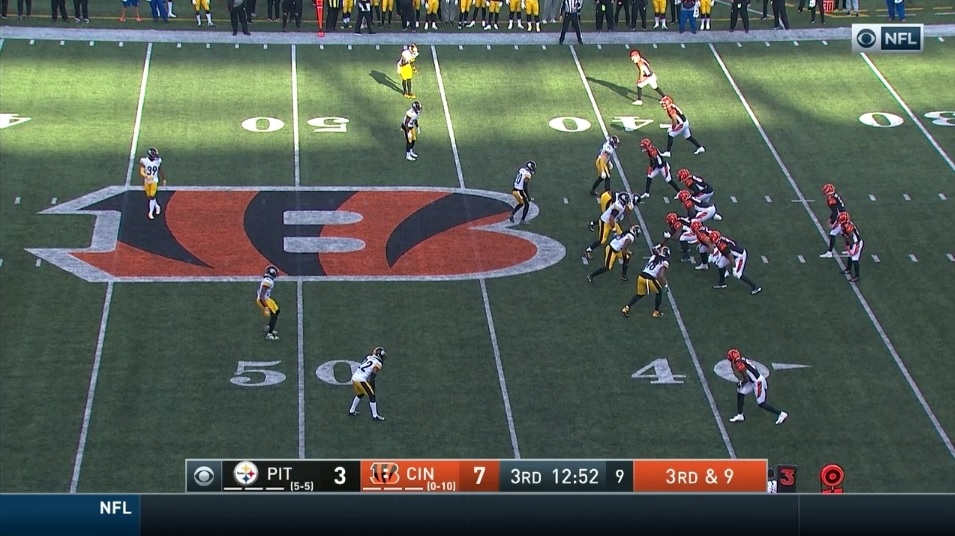 Throughout the year, we’ve paid close attention to the Pittsburgh Steelers’ dime defense. While they haven’t used it nearly as often as last 2018, in large part due to better ILB play and depth, it’s the grouping you most often see in crucial situations. 3rd and long, end-of-half, end-of-game, the “gotta have it” moments as a defense when you’re counting on that unit to get a stop.

Earlier this year, we wrote about the issues they had in dime with Kam Kelly on the field. The struggles that unit’s gone through. At the time, we wrote the team should make a logical adjustment. Instead of removing Mike Hilton for Cam Sutton to play the slot, put Sutton out there in Kelly’s place. Just gives you better personnel while retaining flexibility.

Then we updated you when the team actually made the switch. Sent Kelly to the bench, an overdue but no-brainer of a move, to keep Hilton on the field. He stayed in the slot with Sutton in the dime/rover role that had him robbing crossing routes in zone or matching up on tight ends.

Today, we’re taking it a step further. The coaches made the change. Is it more effective? The numbers say yes. Pittsburgh’s dime defense has become much more effective since they made the personnel swap.

Based on our charting, here is the Steelers’ dime defense with Kelly on the field, so basically before the bye week, compared to Hilton on the field, post-bye. We have it broken down in terms of completion percentage, QBs yards per attempt, touchdown/interceptions, QB rating, and first downs allowed.

Sutton and Hilton are better in every category except TD/INT ratio, where they’re both 1:1. And the sample size is about the same. Sutton/Hilton have faced 51 pass attempts. Sutton/Kelly faced 42.

Despite facing more attempts, Sutton/Hilton have allowed nine fewer first downs. Against them, QBs are completing 11% fewer of their passes, their yards per attempt drops by more than two (if you’re wondering, the yards per completion also dropped by about two yards, 12.5 vs 10.8), and QB rating dips 15 points.

Better coverage means more chances for the pass rush to get home, too. Numbers tell that story. With Sutton/Kelly, the defense had just two sacks. Sutton and Hilton? Five of them.

I doubt anyone is shocked by the improvement but it’s important to put the numbers to it. Hilton and Sutton are your best sub-package players and the good news is both almost certainly will return for 2019 to do it again. Sutton is still on his rookie contract while Hilton will be an RFA who is certain to receive a tender, though he’ll also be angling for the long-term deal he didn’t receive this past offseason.