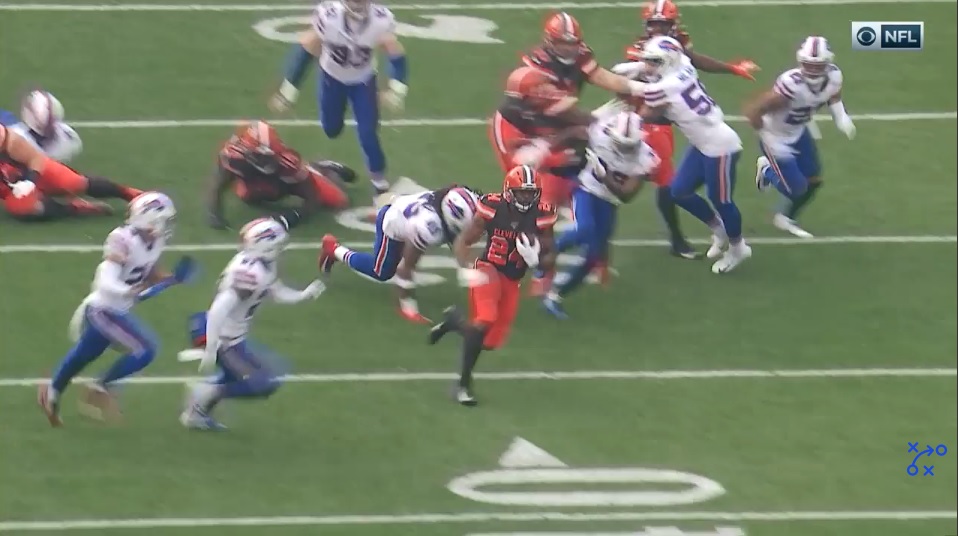 Looking at the Cleveland Browns’ offense.

For as many woes as this Browns’ team has had this season, there’s still so much starpower to remind you the potential the group has. That begins with their run game, led by Nick Chubb. He’s averaging 5.3 yards per carry with six touchdowns, a backbone of this rushing attack and really, the whole team.

Now, Kareem Hunt, off the suspension list, is in the fold. Only had four carries last week but heavily involved in the offense. Chubb had 81% of the snaps, Hunt had 54%. Which means, yes, plenty of “pony” looks with both guys on the field. Hunt can line up wide, he gets involved in their screen game, but they’ll also put them in the backfield in a pistol look so you don’t know who is getting the football. 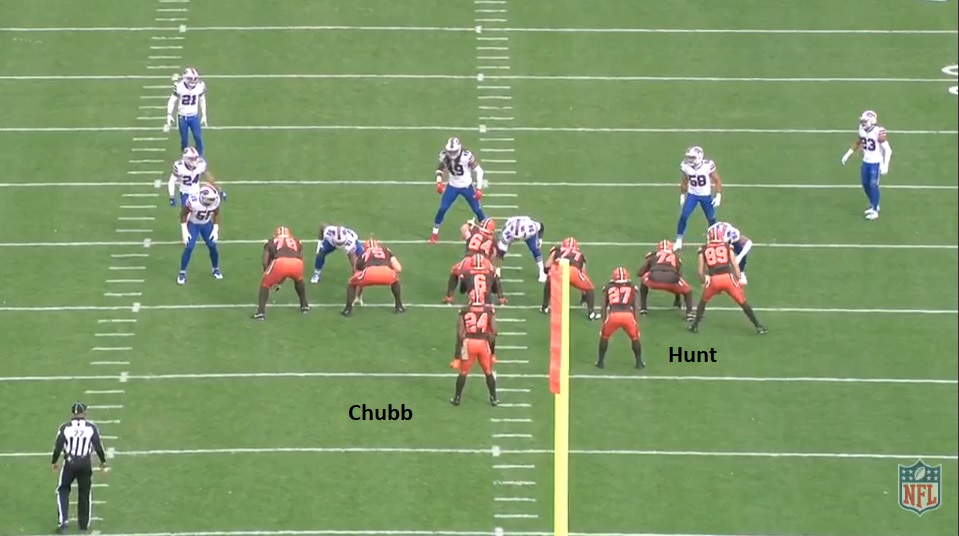 Get more outside zone from this bunch so be ready to defend the perimeter. They get a ton of explosive plays on the ground too. 34 carries of 10+ yards, eighth most in football. They like getting the ball on the outside in general, especially tosses and runs to the boundary.

Little bit of a Patriots’ feel in the run game. They’ll look to Wham interior defensive linemen early in the game. Get a TE or FB (tight end aligned in the backfield) and have them block a defensive tackle. Get that guy to have a head on a swivel the rest of the game, wondering the next time it’s coming.

Some other stats. Offense has struggled to put up points, held under 20 points the last three games and six games total this year, and they’ve struggled near the goal line, especially last week. Had eight “goal to go” plays on one drive against Buffalo. For the year, they’re 26th in red zone offense (46.7%) and even worse on 3rd down (28th – 31.2%).

Baker Mayfield is having what could be considered a sophomore slump but playing better as of late. For the year, he’s completing less than 60% of his passes, thrown nine touchdowns, and 12 interceptions. But over the last three weeks, he’s at nearly 66%, four touchdowns to just one pick. The offense hasn’t turned the football over the last two weeks, either.

Odell Beckham Jr. also has a pair of passes this year. One came on the very first play of the game. On a short week, a 3-6 team, they might try some trickery to give them an edge.

Of course, OBJ and Jarvis Landry are the #1 and #2 receivers on the team. Combined, they have 89 receptions for 1284 yards and three touchdowns. Chubb is third on the team with 27 grabs. No other player has more than 11. Not much of a tight end presence with the injuries to David Njoku and Ricky Seals-Jones.

Not nearly as many big plays in the pass game as you might think. Just 30 completions of 20+ yards, an average figure league-wide.

Decent amount of playaction from this offense. Will go 12 personnel and try to throw vertical off it. Can move the pocket too and get Mayfield on the move throwing to leveraged receivers with room to run.

Lot of RPO action too, trying to make defenses deal with Chubb and OBJ/Landry at the same time. Isn’t easy.

Hard to get a read on the concepts they use, it’s pretty varied, but they have plenty of trust in their receivers – as they should – to win one on one battles. Play man coverage, play single high, Mayfield isn’t afraid to test your cornerbacks.

One other route concept I don’t talk about often in my reports. Against Denver two weeks ago, they ran this Tare concept. Two out routes with #1 going vertical to the same side.

Coming into the 2019 season the Browns were hyped as not only division favorites, but also Super Bowl contenders. I did have them as a Wild Card pick, but what we’ve seen in the 10 weeks so far is abject disaster after disaster.

First-year head coach Freddie Kitchens is in way over his head, while second-year quarterback Baker Mayfield has seemingly regressed under Kitchens while playing behind a dreadful offensive line. Adding to the mix Cleveland’s inability to consistently get Odell Beckham Jr. the football on offense, and, well, it’s going very poorly.

However, the Browns run the ball really, really well, which allows them to build off of success on the ground with RPOs through the air with Mayfield, giving the former Heisman Trophy winner and No. 1 overall pick quick, easy first reads, allowing him to get the football out quickly to protect him.

Usually, those RPOs go to slot receiver Jarvis Landry, who has really heated up in recent weeks.

When the Browns are in shotgun with a sidecar next to Mayfield and Landry lined up in the slot, the RPO is almost certainly coming.

Nearly every week the Browns have run some variation of it, whether Landry is on the right or left. He’s going to run a quick slant every time, asking Mayfield to thread the needle into some tight windows in the process.

Credit to Mayfield and Landry though, because it’s worked almost every time.

It’s pretty obvious just how much arm strength and talent Mayfield has for the position. On both of these throws the ball is fired into super tight windows with impressive accuracy.

When Beckham Jr. does get the touches, he absolutely balls out. On 44 catches Beckham Jr. is averaging nearly 15 yards a catch. Here’s hoping his breakout game isn’t Thursday night.

Outside of Beckham Jr. and Landry, the Browns are pretty solid at receiver, at least on paper. I’m a big believer in Rashard Higgins, who is finally healthy and caught the game-winning touchdown pass on Sunday against the Bills.

Antonio Callaway is also a high-end talent, but he’ll sit on Thursday due to a team-issued one-game suspension.

When on the field, he’s electrifying after the catch. I’m also a big fan of this schemed-up touch here.

I love the little fake toss right to get the defense looking one way, which allows Mayfield to flip his hips around and fire the football to Callaway on the tunnel screen. This one ended up going for 41 yards, sparking Cleveland’s offense on the road against Denver.

The passing game has all the talent in the world and a super-high ceiling, but the run game is the bread and butter of the offense with the outside zone.

Nick Chubb is the perfect back for the outside zone in today’s game. Unfortunately for Pittsburgh, the Steelers really struggle against the outside zone. It will be a huge test on Sunday.

Chubb is a track star for the position and also adds great vision, contact balance and power. He’s an absolute load with the football in his hands and refuses to go down.

Adding Kareem Hunt to the mix at running back just isn’t fair, especially if he’s going to carry the weight in the receiving game out of the backfield.

Cleveland used him a ton on Sunday against the Bills, lining him up all over the field while finding ways to get him 11 touches. Expect more on Thursday night as the Browns battle a short week and a physical defense.

At tight end, Cleveland has patched it together after losing David Njoku for the year early on. Guys like Demetrius Harris and Ricky Seals-Jones have done a good job serving as pass catchers and run blockers for the Browns.

Harris has been the most consistent and has really developed a rapport with Mayfield this season.

One-on-one against a linebacker on the road against the Patriots, the Browns let Harris win vertically for the touchdown.

Devin Bush has struggled mightily against tight ends in pass coverage this season, so I expect the Browns to go right at him with RSJ and Harris.

Up front, I mentioned earlier that this Browns unit is abysmal. I wish there was another adjective that was worse than abysmal to describe them.

On Sunday against the Bills, Cleveland ran eight straight plays in Goal-to-Go situations and gained zero yards. There’s no push up front in short yardage situations, and they simply can’t protect Mayfield.

Hubbard has been quite the disappointment for the Browns since leaving Pittsburgh, while Robinson’s reclamation tour has been mostly rocky this season.

I do like the interior on the left side with Bitonio and Tretter – who just signed a huge extension – but there’s just a lot to be desired here.

Pittsburgh’s front seven should have a really good day against this unit.

On special teams, rookie kicker Austin Seibert has been pretty consistent this year, hitting all 16 field goal tries on the year. However, he has missed three extra point attempts, including one last week that was no good from 48 yards out due to a Landry taunting penalty after a touchdown. That’s worth keeping an eye one.

Punter Jamie “The Scottish Hammer” Gillan has a monster leg, but the Browns struggle on punt coverage. Gillan is averaging roughly 47 gross yards a punt, but on nine returns the Browns are allowing nearly 13 yards per return. Not good.