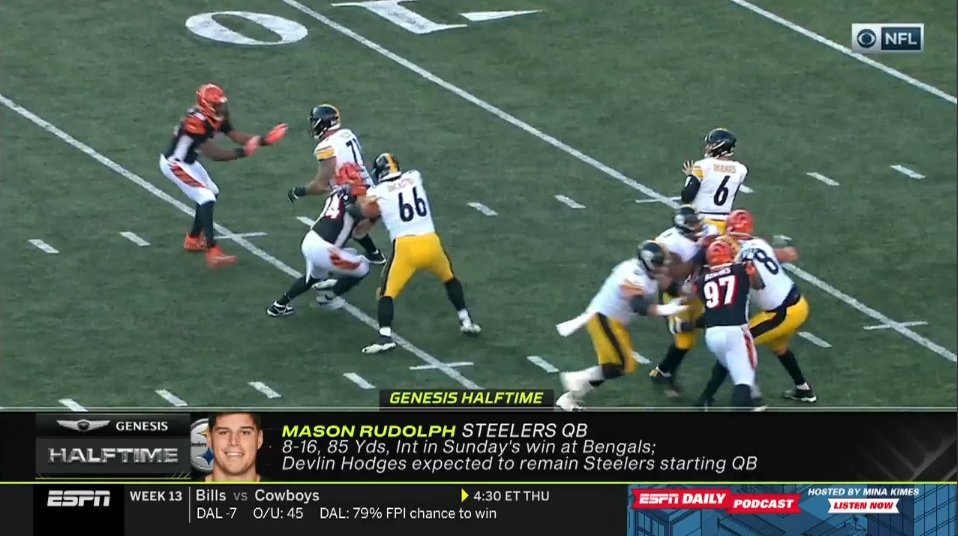 While we wait on Mike Tomlin’s official announcement, all signs indicate towards Devlin Hodges being named the Pittsburgh Steelers’ starting QB for this Sunday’s rematch against the Cleveland Browns.

During the halftime show of the Baltimore Ravens’ blowout win over the Los Angeles Rams, ESPN’s Adam Schefter said Hodges is expected to get the nod over Mason Rudolph this weekend.

“Devlin Hodges was the man who replaced Mason Rudolph on Sunday in Cincinnati,” Schefter said. “He is expected to remain as the starting quarterback as they get ready for a big game on Sunday against the Cleveland Browns in a rematch of that Thursday night brawl-fest we saw a couple of weeks back.”

While Schefter didn’t name an official source, any commentary he offers is likely well-placed and should be trusted as the most likely outcome.

Rudolph was benched one series into the second half after putting up only three points against the Cincinnati Bengals’ hapless defense. He ended the game 8/16 for 85 yards, no touchdowns, and a red zone interception. Hodges threw a 79 yard touchdown to James Washington on his second pass attempt of the game, the biggest play of the game in the Steelers’ eventual victory.

Hodges has made one start this season, filling in for Rudolph against the Los Angeles Chargers. While the team was conservative offensively, the Steelers won 24-17 and Hodges completed 75% of his passes and threw his first career touchdown.

Tomlin will have his press conference Tuesday at noon, where he’s expected to make an announcement of who his starter is going forward.