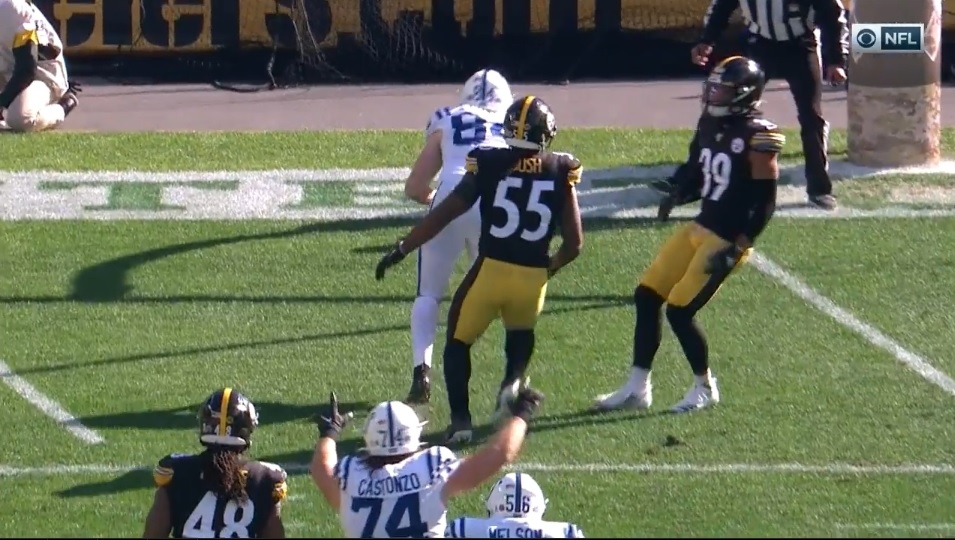 Devin Bush/ILB – In the first half, I was asking myself what happened to the inside linebackers. They didn’t seem to be making a lot of plays. After watching the game again I see up until there were 2:21 seconds left in the first half, Bush had one tackle. He finished with seven total tackles, four of which were on pass plays but did have one tackle for a loss. He made a couple really nice plays in coverage running stride for stride with Nyheim Hines early in Q3 on a crossing route and defending Jack Doyle later in the 3rd quarter to break up the pass.

He did get beat by Doyle on a touchdown pass. I’m giving the TE credit on this one making a really nice nod to the outside to get Bush to bite. His other tackles vs the run were 6 and 7 yard gains.  He played better in previous games but this was against a good offensive line.

Good rep in coverage staying balanced at the stem, good COD to break to the inside and gets the hand around to break up the pass.

Diontae Johnson/WR – Johnson had his quietest day of the season with 1 catch for 3 yards. He was targeted one other time on a deep ball but Mason Rudolph was hit as he threw and the ball fell well short. There were opportunities to get him the ball.  On the fourth and 2 shovel pass to Juju Smith-Schuster, Johnson was open in the flat for a first down. Also on a screen to Jaylen Samuels after the free kick fumble that lost 4 yards, he ran a shallow cross to the other side of the field and was wide open. He also drew the pass interference call to set up the go ahead field goal. A reverse run in Q4 wasn’t productive either gaining only two yards.

He got called for penalty number 5 on the year with a false start in Q2. Take that with a grain of salt though because the false start last week wasn’t totally his fault and one of his offensive PI penalties saved an interception.

Here are two of the missed opportunities. First, Johnson will go in motion to the right on the fourth down play and he is open in the flat. They second clip is the crossing route on the screen. It looks like he would have had space to run.

Isaiah Buggs/DL – He dressed for the second consecutive game and saw limited action playing 8 defensive snaps.  He did not get his name in the box score but like last week held his own. He did show some positive avoiding the down block of the center on one play and showed good strength tossing aside LT Anthony Castanzo on another.

Here is the clip versus Castonzo (74) where Buggs (96) is lined up as the 3 Tech. He going to be chipped by Quinton Nelson (56) and uses his hands well, has good leverage, stays square and is going to toss Castonzo to the inside before giving good pursuit to the ball

Ulysses Gilbert III/ILB – He was involved in two tackles. One in Q1 on the fumble by Parris Campbell he was credited for tackling Zach Pascal who recovered the fumble. Then in Q4 he had the tackle on kickoff coverage.

He seems to struggle getting off blocks especially in kick coverage but I’ll have to wait to see the All-22 to confirm. Was surprised to see the punter beat him to the ball on the free kick but maybe Jordan Berry wasn’t blocked.

Tony Brooks-James/RB – With James Conner and Benny Snell missing the game the staff felt more comfortable having 3 running backs on the active roster so Brooks-James got the call. He was given a chance to play as well getting in on 4 offensive snaps including one carry for no yards. Welcome to the NFL, Tony.