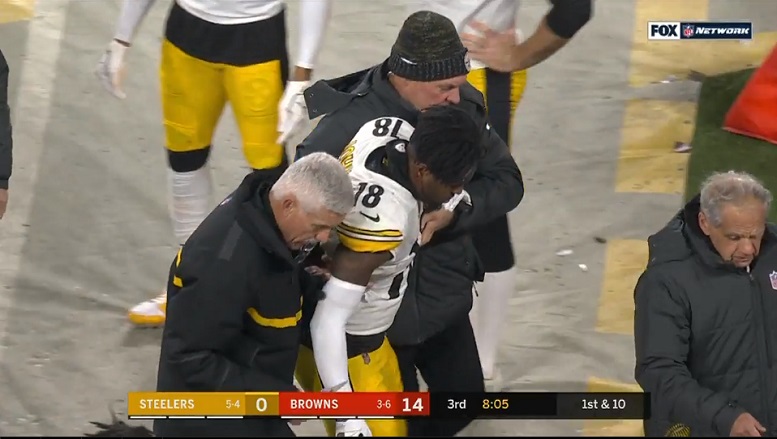 The Pittsburgh Steelers suffered several injuries during their Thursday night road loss to the Cleveland Browns and the Week 12 statuses of all four players who left that prime-time televised contest aren’t likely to be known fully until sometime late next week. Wide receiver JuJu Smith-Schuster and Diontae Johnson were two of those four players and on Thursday Adam Schfeter of ESPN offered an update on the latter.

According to Schefter, Johnson suffered a concussion in the third quarter of the Thursday night on the hit to the head he took from Browns safety Damarious Randall, will remain in concussion protocol and the team will monitor his status before their Week 12 road game against the Cincinnati Bengals.

Schefter’s report isn’t a bit surprising considering how long Johnson stayed down on the field following the hit and how wobbly he appeared to be on sideline immediately after making it that far with assistance. It would be a minor miracle if Johnson is out of concussion protocol by Monday and there’s probably a decent chance he ultimately misses the team’s Week 12 Sunday game against the Bengals.

While Johnson was seemingly bleeding from his right ear while being helped off the field and to the blue medical tent, many seem to think that was a result of a superficial wound, and not from something such as a busted eardrum.

Steelers head coach Mike Tomlin didn’t provide much in the way of updates on the players who were injured Thursday night. As far as Johnson is concerned, Tomlin only said Thursday night after the game that the rookie wide receiver had suffered a concussion, just as he said Smith-Schuster did as well.

The Steelers will likely add at least one wide receiver to their practice squad next week and maybe even two depending on how Johnson and Smith-Schuster are feeling after the weekend. Perhaps Trey Griffey will be practice squad option for the team as he was on that unit all last season and back in training camp and the preseason with the team this offseason.

For whatever it’s worth, Johnson tweeted out on Friday that he appreciates all the prayers he’s received since getting injured Thursday night and that he’s doing good and will be back.

Appreciate all the prayers man.. I’m doing good. I’ll be back 🙏🏾