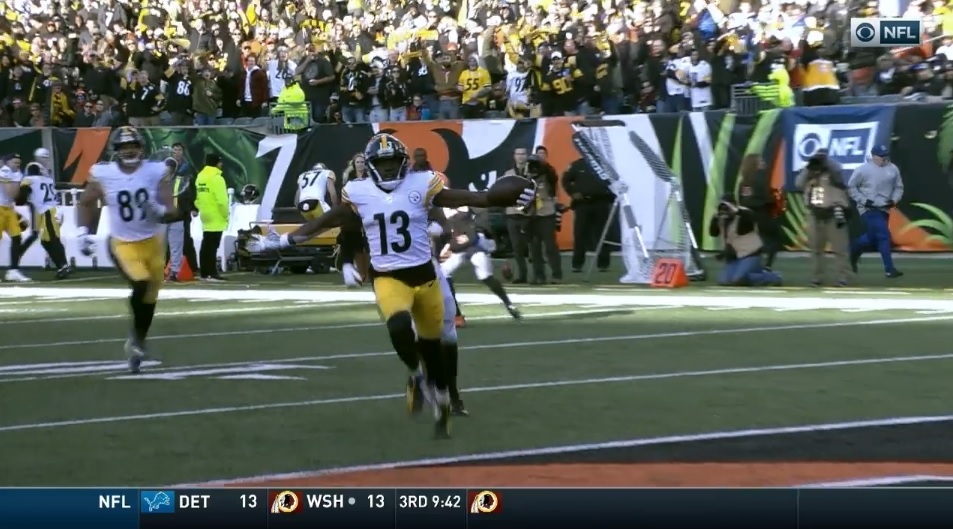 The winds of change swept through Cincinnati, as a Pittsburgh Steelers offense filled with many new faces had just enough in the tank to defeat a winless Cincinnati Bengals squad 16-10. Led not by Mason Rudolph but by Devlin Hodges, the offense went ahead and the defense closed it out as the Steelers squeaked out a close one in Cincinnati.

With the Steelers down 7-3 as the second half began, Hodges was inserted in place of Rudolph and was able to lead three scoring drives as the dynamic of this game changed completely after “The Duck” stepped in. Hodges finished just 5/11 for 118 yards and a touchdown but his poise and energy were the difference maker after Rudolph once again got off to a slow start. The defense would do their part as well as Devin Bush and Bud Dupree both forced fumbles in the fourth quarter to hold off any chance of a Bengal’s comeback.

This game got off to a real slow start as the first seven drives ended in either a punt or an interception. The Steelers looked like they would be the first to put points on the board but another questionable decision from Rudolph saw the offense turn the ball over in the red zone.

Facing a third and goal, Rudolph targeted Tevin Jones but his pass was intercepted by Shawn Williams. While his arm was hit on the throw, Jones was surrounded by four Bengals’ defenders, making this a shaky decision at best.

The sparsely filled crowd would get to witness their first points on the game’s eighth drive. A great 35-yard catch by the newly signed Deon Cain would lead to a 26-yard field goal by Chris Boswell to give the Steelers a 3-0 lead. Unfortunately, this would be another unsuccessful try in the red zone and the Bengals would take advantage on their very next drive.

Bengals receiver Tyler Boyd would take the game into his own hands on the ensuing drive. On two consecutive throws it was Ryan Finley throwing what looked to be a jackpot and, on both throws, Boyd was able to come down with the football. First, it was a 47-yard one handed catch over Terrell Edmunds and then a 15-yard touchdown over Joe Haden to give the Bengals a 7-3 lead.

It took just one half and one drive for the Steelers to yank Rudolph out of this one. After throwing a one hopper to Diontae Johnson on the first third down of the second half, the Steelers made the call to bench Rudolph and insert Hodges.

Rudolph finished just 8/16 for 85 yards and one interception.

It took just two passes for Hodges to not only outproduce Rudolph’s total offensive output but also to score the Steelers’ first touchdown of the day. Hodges found James Washington across the middle for a 79-yard touchdown pass, the longest pass play of the season for the Steelers, to give them a 10-7 lead. Washington had an incredibly violent stiff arm on the play that secured his way into the end zone. Washington would finish with three catches for 98 yards and a touchdown.

Finley would answer Hodges’ score with a scoring drive of his own. A nine play, 68-yard drive would end with a Randy Bullock field goal as the Bengals tied this one up at ten.

From there, both offenses would continue to stall until a few questionable calls on the Bengals’ defense would aid the Steelers’ offense. Two pass interference penalties on cornerback B.W. Webb would gift the Steelers 34-yards and while Hodges was unable to convert on third down at the 30-yard line, Boswell would knock through a 47-yard field goal to retake the lead.

When in trouble call on Devin Bush and Minkah Fitzpatrick to save the day and that’s exactly what the Steelers defense did late. Just as they have done all season, the duo forced a potential game saving turnover in the fourth quarter with the Bengals deep in Pittsburgh territory.

Finley found Boyd on a 22-yard pass to the Steelers eight-yard line but Bush was able to punch the football out shortly after the receiver made the catch. Fitzpatrick would scoop the loose football and return it to the Steelers’ 42-yard line.

Boswell would add another field goal shortly after this, giving the Steelers a 16-10 lead but also giving the Bengals one last chance to steal this one late. Dupree would ruin the Bengals’ plans, stripping Finley late and recovering the fumble himself.

Benny Snell Jr. would milk the clock dry in the fourth quarter, as he pounded a tired Bengals defense into defeat. Filling in for an injured James Conner, Snell had 98 rushing yards and was part of a running committee that put up 160 rushing yards, their best output of the season.

With the win, the Steelers move back into the #6 seed in the AFC and after a two-game road trip to Ohio, the Steelers will fly back home and prepare for a very anticipated rematch with the Cleveland Browns. Kickoff is set for 1 p.m. EST.