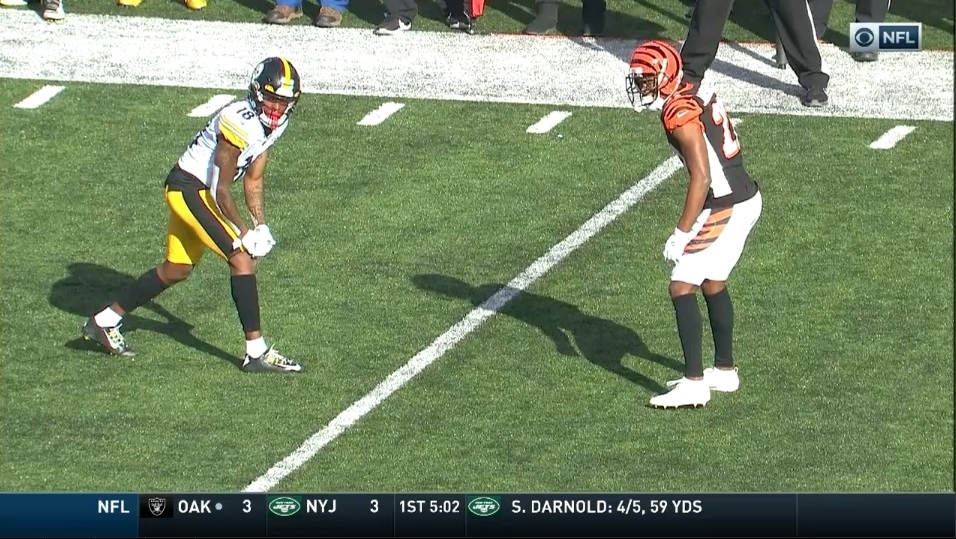 Sunday’s game in Cincinnati certainly wasn’t aesthetically pleasing on TV, but a win is a win, and it all counts the same, no matter how it looks.

After Mason Rudolph looked mostly abysmal in the first half and the start of the second half, the Steelers put out a duck call and turned to Devlin Hodges, who immediately sparked the Steelers with a long touchdown pass to James Washington, helping the Steelers shake off a slow start to pick up an important 16-10 win on the road over the hapless Bengals, pushing the Steelers back into the No. 6 seed in the AFC playoff picture.

Defensively, the Steelers bent a few times but ultimately didn’t break when it counted thanks to a terrific pass rush and some timely pass breakups from Joe Haden and Mike Hilton, as well as a forced fumble by Devin Bush and a recovery by – who else – Minkah Fitzpatrick.

Let’s get to some grades so we can enjoy that turkey dinner later this week.

I’ve seen some takes that Hodges looked incredible and is certainly the answer moving forward at quarterback the rest of the way in 2019.

That couldn’t be further from the truth, nor could it be a hotter take.

Yes, Hodges fired a strike to Washington, but he also made some very risky throws, and also threw an ill-advised throw-away late in the third quarter instead of just sliding down, taking the sack and letting the clock run.

Make no mistake though: Hodges opened the offense up, allowing the running game to get going late, which was key to winning the football game. Hodges looks a bit more comfortable, has a better feel for the pocket and is able to extend plays with his legs. That’s ultimately what’s going to get him the start on Sunday against Cleveland, not his performance throwing the football.

As for Rudolph, right away he looked hesitant in the pocket, read routes slowly and was a tick too late pulling the trigger. His mechanics were also a disaster. I’m just not sure we’re going to see Rudolph again this year.

Kerrith Whyte Jr. looked really good as well, ripping off a couple of explosive runs to get the Steelers going in the first half. It was really refreshing to see a speed element in the backfield with some serious juice.

As receivers, Snell and Whyte Jr. didn’t offer much, but I was very pleased with Snell in pass protection, and he even bailed Rudolph out over the middle on a high, late throw on third down, putting his body on the line to secure the football.

Jaylen Samuels looks like he’s largely phased out at this point. The former fifth-round pick touched the football just five times for 32 yards and had a false start penalty early in the game. There was a clear difference in running styles with Snell and Whyte Jr. compared to Samuels.

Washington continues to break out in a big, big way.

The former second-round pick looks completely comfortable in this offense, is creating a ton of separation on routes, and is making the most of his touches. His work after the catch Sunday against the Bengals was incredible. That touchdown will be played over and over and over again for the rest of his career.

Diontae Johnson continues to really stand out as a route runner. It would just be nice if whomever is at quarterback can consistently get him the football.

Deon Cain flashed in his Steelers debut, making a great catch early in the game on a 50/50 ball down the right sideline, and then later drew a key pass interference penalty that pushed the Steelers into field goal range. He’s going to be able to take the top off of defenses. Now, if they can just find a guy to consistently dial up the deep ball.

I’m starting to lose a ton of faith in Nick Vannett as a blocker. He’s simply not making an impact in two tight-end sets and is good for a penalty or two a game.

Vance McDonald also isn’t making an impact at all. The Vanimal has been tamed this year. One catch, one yard on Sunday, and he’s just not the blocker he once was.

There’s just not much more to say about this group right now.

Yes, the Steelers rushed for 160 yards and averaged 4.2 yards per carry, but the offensive line appeared to be troubled by the Bengals’ front seven throughout the game.

Alejandro Villanueva is having a rough year right now. He’s on the ground far too often and is having trouble with speed this season. Carlos Dunlap smoked him off the edge for a sack of Hodges in the fourth quarter that Hodges was lucky to hold onto.

I thought BJ Finney played well in place of Maurkice Pouncey. He didn’t get a ton of push and didn’t seem to climb to the second level as efficiently as Pouncey has in the past, but Finney made it work and played a part in the Steelers’ success on the ground.

Overall though, it just feels like this unit is struggling to provide clean, structured pockets right now. Maybe I’m misreading it, but that’s what it feels like when I’m watching the line on Sundays right now.

Heyward dominated on Sunday, leading the Steelers with six tackles, a sack, 1.5 tackles for loss and an astounding four quarterback hits. He walked center Trey Hopkins right back into Ryan Finley for a sack in the second quarter that really got the defense going.

Javon Hargrave also had a really strong game against the run, finishing with four run stops. Tyson Alualu didn’t record a stat on the day, but he has quietly been a key piece to the front seven since Stephon Tuitt went down. Alualu has matched Tuitt’s play to this point.

TJ Watt and Bud Dupree continue to form quite the pair. It’s incredible to watch.

Watt made his impact felt right away, dominating Bobby Hart once again, strip-sacking Finley in the first quarter. Watt also broke up a pass and played the run well while fighting through injury.

Dupree essentially saved the game for the Steelers, strip-sacking Finley and recovering the football for the triple play. Dupree was a monster against the run as well, setting the left edge consistently.

Inside, Bush forced a fumble that kept the Bengals off of the board, but he did take a silly hand to the face penalty that gave the Bengals a first down on a play that should have set up second and long after a fumble.

Mark Barron had a pass interference and defensive holding call against him on the same play, which is something I’ve never seen before. He was pretty solid overall though, sacking Finley while holding up really well against the run. He bounced back in a nice way this week.

Yes, Haden had three pass breakups, but he was a mess throughout the game. He was beat twice on double moves and was beat by Tyler Boyd for a score. He also dropped at least two interceptions. It’s nice to see him in position to make plays on the football, but he has to start finishing those plays.

Steven Nelson continues to be one of the best off-season signings across the league. He had a huge open-field tackle on Finley in the second quarter that forced a punt, and essentially took Auden Tate out of the game.

Mike Hilton had a great game in the slot. He broke up a pair of passes, rushed off the edge well and really seemed to negate Alex Erickson. He did have a pass interference call against him though, extending a drive.

Terrell Edmunds simply doesn’t know how to make a play on the ball in coverage to save his life. Boyd bodied him for a one-handed catch down the field, setting up the Bengals’ touchdown. That said, I thought Edmunds was really, really good in the box on Sunday. He flew around with confidence and was consistently around the football.

Fitzpatrick had the key fumble recovery and an excellent return to set the Steelers’ offense up on a short field. He was run over by Joe Mixon in the open field, but overall he was a solid tackler and was around the football quite a bit.

Kick returning continues to be a huge problem, both from a penalty standpoint and from a results standpoint.

Trey Edmunds took a silly crack-back penalty on a Whyte Jr. kickoff, setting the Steelers up deep in their own territory. It can’t happen. Not with this offensive ineptitude.

Jordan Berry was the MVP of the day for the Steelers. He continues to punt the football at an elite level, flipping the field consistently. He really hemmed in Erickson on Sunday.

Johnny Holton, Ola Adeniyi, Justin Layne and Robert Spillane were outstanding on Sunday on special teams. Adeniyi set the tone on the opening kickoff with a monster hit on Brandon Wilson, while Spillane led the Steelers with four special teams tackles. Layne was a remarkable improvement over Artie Burns as a gunner.