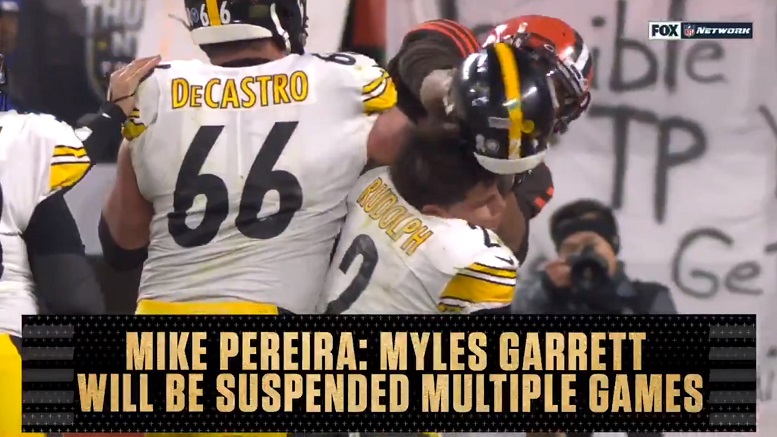 We’re going to be talking about the melee that happened late in the Thursday night game between the Pittsburgh Steelers and Cleveland Browns for quite a while moving forward and long after the NFL hands down punishments to those that feel deserve them. While we might not know for several days how long the NFL will ultimately suspend Browns defensive end Myles Garrett, FOX rules analyst Mike Pereira, a former Vice President of Officiating for the NFL, believes a lengthy suspension is forthcoming

“This is a terrible situation and I think that we certainly will be looking at suspensions,” Pereira said during a postgame interview. “You know, I think the, swinging of the helmet is like crazy. It’s absolutely crazy. It’s actually in the rule book where it says that you cannot take a player’s helmet off and use it as a weapon. But to me, Garrett is going to have a pretty lengthy suspension and not just because of what he did tonight.”

.@MikePereira explains what kind of suspensions should be expected for players following tonight’s Steelers-Browns game. pic.twitter.com/2u8wwYvj4b

Pereira went on to say that Garrett’s previous behavior when it comes to him being fined for illegal hits on quarterbacks will likely play a role in how long he’s suspended.

“I mean, you’ve got to go back and look at the season,” Pereira said. “He’s already been fined twice for hits on the quarterback. And now you take this incident, and so I’m not going to be surprised if we don’t see something that could approach four games. I don’t know how long, you know, that they have gone before for an incident like this, but I think four games is probably going to be what they do.”

Pereira went on to say that whatever suspension length that Garrett receives from the league will likely stick even if it is appealed by the player.

“It could get reduced because certainly the player can of appeal the fine, but I just don’t see it,” Pereira said.

Pereira also went on to say that he thinks Steelers center Maurkice Pouncey will get suspended as well for swinging at Garrett during the brouhaha and kicking him in the helmet when he was on the ground.

“And Pouncey, too, where his kicking and just swinging,” Pereira said. “I mean, again, this goes beyond pretty much everything, anything that I have seen. What will happen is, they’ve got some time. That’s the thing, because neither team plays until the following week. So, I wouldn’t look for a decision to be made until maybe Monday or early Tuesday.

Many current and former NFL players are calling for Garrett to be suspended for the remainder of the season and Pouncey was one them.

“Absolutely, absolutely, 100 percent,” Pouncey said when he was asked if Garrett should be suspended the remainder of the season. “We’ll see how serious the NFL is about their players.”

Pouncey was also asked after the game if he thinks he’ll ultimately be suspended by the NFL for his actions in the Thursday night melee.

“At this point, who cares?” Pouncey said. “My man got hit in the head with a helmet. I’ll accept whatever penalty it is.”

Obviously, I think Garrett should be suspended for at least four games and I won’t be surprised if he ultimately is sat down for the remainder of the season. As for Pouncey, while I don’t blame him for doing what he did Thursday night to come to the aid of Rudolph, he’ll likely be suspended for a game.

Like Pereira said, with this game taking place the Thursday night the NFL has several days to examine all off the evidence and then pass down suspensions early next week, and likely on Tuesday. We’ll be talking about the suspension or suspension lengths and fines and more the next several weeks as the Steelers will play the Browns again in Week 13 in Pittsburgh.