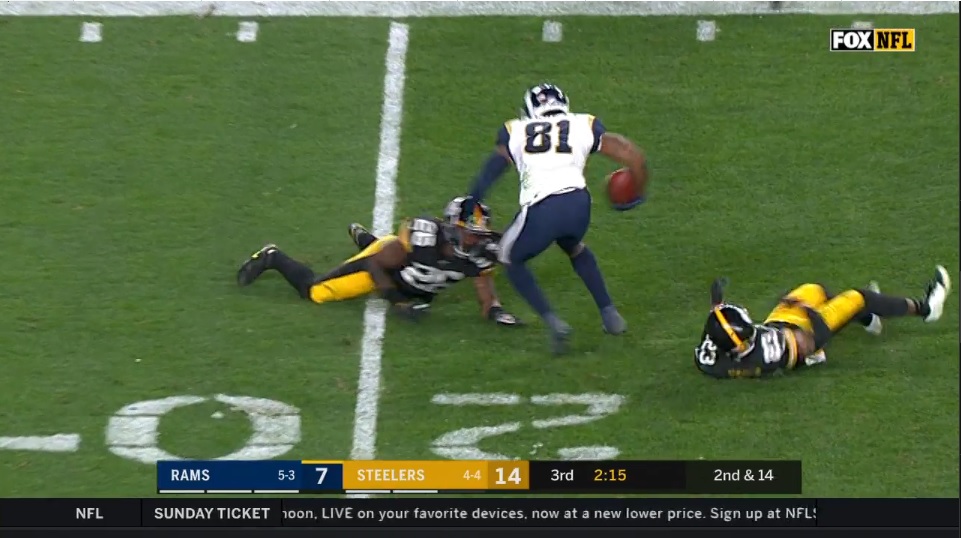 You’ll notice a theme here in this report: mostly all defensive backs missing tackles for the Steelers. None were really egregious, but that’s still kind of concerning to see, especially with it trending towards continuing.

Let’s take a look at the Week 10 missed tackles report.

Joe Haden turned in the best overall performance of his career as a Steeler, no doubt about that statement. However, he led the Steelers in missed tackles Sunday. I’m able to live with the misses because I saw a guy absolutely selling out on every single snap to try and help his team. You’ll miss at times, and that’s what Haden did.

While Steven Nelson pops up on the missed tackles report this week, he was so, so much better in Week 10. He was very aggressive, physical, and came up with a huge open field tackle on tight end Gerald Everett on a big third down play late in the game.

The thing that really bugs me with this list though is Artie Burns popping up yet again with another missed tackle on special teams. In fact, all four misses have come on special teams, with all four coming on punts. He’s done a good job getting downfield quickly on punts as the gunner, but he’s been rather pedestrian as a tackler. That’s flat-out not good enough.

Let’s take a look at some of the worst missed tackles from Week 10.

Burns came up with the first miss of the game for the Steelers. This one came early in the second quarter on a booming punt by punter Jordan Berry.

Burns is a bit delayed getting down the field, but he does a nice job squaring up with Rams return man JoJo Natson. From there, he simply fails to finish the job, allowing Natson to turn the corner on him for a small gain.

I am probably nitpicking here, but he has to make the open-field stops when he’s in position. Right now he’s simply not doing it on special teams.

Midway through the second quarter Haden and Nelson pop up on the missed tackles report.

Jared Goff throws an absolute dart to Josh Reynolds on the crossing route near midfield. Haden goes for the big hit and misses, allowing Reynolds to stay on his feet and gain additional yards.

After Haden’s miss, Nelson goes for a bit of a ride up and over Reynolds, who shrugs off the Steelers’ cornerback to stay on his feet. Fortunately for both defensive backs, Minkah Fitzpatrick (who else?) is there to save the day, getting Reynolds to the turf.

Finally, late in the third quarter the Steelers’ defense came up with its final missed tackle of the night, this time on the big, physical Everett, who had quite the game.

Lately, Mark Barron has had issues with friendly fire when it comes to defensive backs. Last week against the Colts he and Terrell Edmunds ran into each other trying to tackle Colts tight end Mo Alie-Cox. This week, it’s Barron and Haden who combine to knock each other off the tackle attempt, allowing Everett to stay on his feet.

This week though, Barron was able to recover from the turf and grab Everett’s leg to get him to the ground.

Both need to use better form. Haden goes for the wrap, but he ducked his head at the last second, causing him to just miss striking his target properly, while Barron went high and failed to properly wrap, causing him to slide off.

Listen, I know what you are all thinking reading what you just read above: no way Ryan Switzer forced a missed tackle.

In my best Dwight from The Office voice…it’s true.

Switzer forced a missed tackle on his horrendous punt return in the fourth quarter that ultimately led to a safety one play later. Switzer stepped through an arm tackle by Rams long snapper Jake McQuaide.

Diontae Johnson had a monster game forcing missed tackles, which I’ll highlight here in a second, while Vance McDonald ran through an arm tackle before fumbling in the fourth quarter.

Tony Brooks-James showed me some serious juice on Sunday. In fact, Brooks-James edged James Washington as Pro Football Focus’ highest grades offensive player on Sunday for the Steelers. I’d like to see this guy stick around.

Johnson though, man he was special Sunday.

While Johnson did end up fumbling on his second punt return, the ability to force misses in a phone booth prior to the fumble was simply incredible.

His lateral explosion is off the charts.

Just look at that clip again and watch him force two guys to miss in tight. He’s developing into quite the playmaker for the Steelers, much faster than many anticipated.

I thought he nearly blew his knee out on this play in the second quarter to pick up a first down on a crossing route, but instead it was just part of his move to defeat Rams cornerback Troy Hill in the open field.

His stop/start abilities showed up in college and in his testing numbers. They’re showing up in a big way in the pros now.