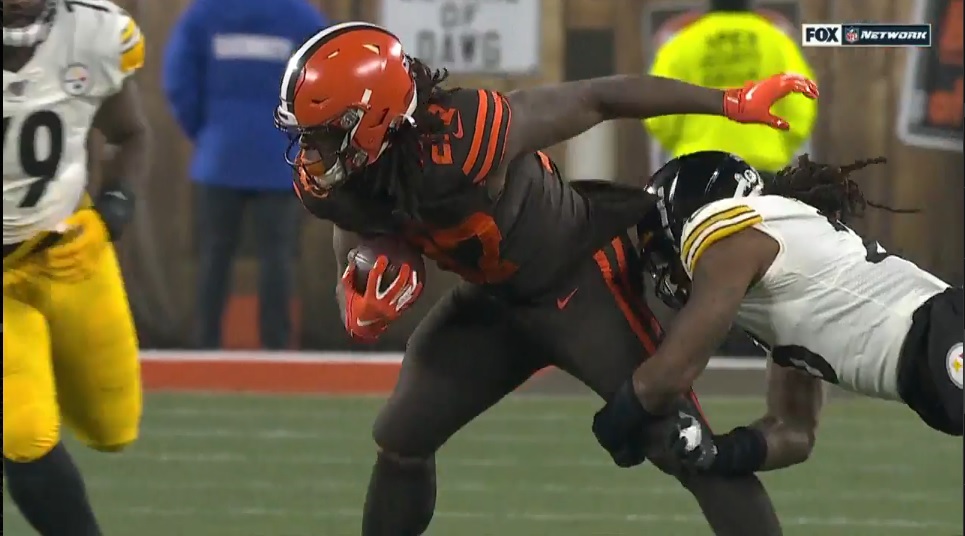 Thursday night’s game in Cleveland against the Browns was as ugly as it gets for the Pittsburgh Steelers from a number of vantage points, most notably on offense.

However, the Steelers turned in another dreadful tackling performance, which led to a couple of explosive plays for the Browns at FirstEnergy Stadium on the banks of Lake Erie.

For the second time in two weeks, Pittsburgh matched its second-worst missed tackles number this year, turning in 11 misses against the Browns, which matches the 11 misses two weeks ago at home against the Indianapolis Colts.

Welcome to the party, Javon Hargrave!

It’s simply incredible that a man around the football as much as Hargrave this season has just now cracked the missed tackles list.

Mark Barron had a dreadful game in pass coverage, getting absolutely dunked on by third-string rookie tight end Stephen Carlson for a touchdown. Aside from that though, he was dreadful in general, leading the Steelers in tackles while looking super slow and disinterested.

Artie Burns missed YET ANOTHER tackle on punt coverage as a gunner. It’s simply not working there for the former first round pick.

Outside of those three, Mike Hilton missed a sack on Baker Mayfield, while Bud Dupree, Vince Williams, Joe Haden and Terrell Edmunds all missed on Nick Chubb throughout the game.

Let’s take a look at some of the key misses.

Early in the second quarter, Barron cracks the missed tackles report on Kareem Hunt in space. What should have been a 2-yard gain turned into a first down because Barron failed to get the running back on the ground.

This is becoming common theme with Barron, so it seems. He’s just not the guy the Steelers were hoping for as a defender in coverage and as a defender overall.

Late in the first half it was TJ Watt’s turn to crack the missed tackles sheet again.

Watt plays this draw perfectly against Chubb, who has to try and pick his way through traffic. I love the strength here by Watt to get off this block; I’d like to see him finish the play though.

If I could nitpick at one thing with Watt this year, it’s his struggles to finish tackles against the run behind the line of scrimmage in the last three weeks. This is his third missed tackle in three weeks, for what that’s worth.

Late in the game, the Steelers defense looked a bit gassed and generally desperate, which led to some missed tackles.

Hilton comes off the edge unimpeded here and just takes a bad angle to Mayfield in the pocket, allowing the second-year quarterback to sidestep his rush and get rid of the ball to Hunt on a short dump off.

Fortunately for Hilton, Hunt is tackled for a loss.

Then, on one of the final plays of the night for the Browns, Hargrave records his lone miss.

I went back and forth on this one for about 20 minutes. While he’s still slightly engaged with a Browns offensive lineman, he does get two hands on Chubb in the hole. That should be a stop Hargrave should make.

Ultimately, I gave him a miss (obviously). Please feel free to leave your thoughts in the comments below and let me know if you agree or not.

Offensively, the Steelers forced just 5 misses, with no play recording multiple misses. That means the Steelers lost the tackles battle with a -6 mark. Yikes.

Diontae Johnson continues to be quite the special athlete in space for the Steelers.

This is just a 4-yard gain, but look at the explosiveness in tight to spin out of the initial tackle attempt and give himself a chance to make a second defender miss.

That’s pretty special, folks. He’s only going to get better.