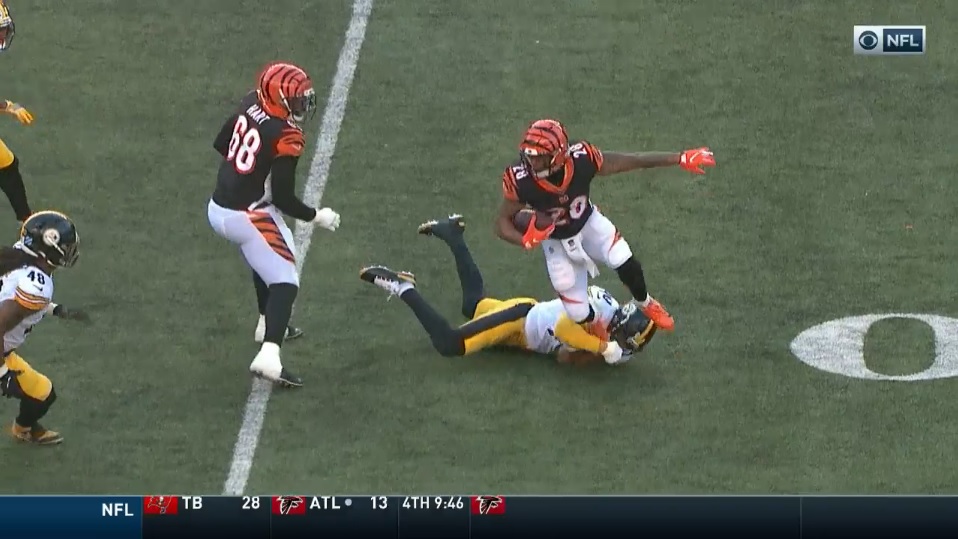 Sunday’s 16-10 win over the Cincinnati Bengals was a first for the Pittsburgh Steelers in a category they’ve generally struggled in.

No, it wasn’t the win column or the offensive output, it was in the tackling department as for the first time in the 2019 season the Steelers’ defense didn’t have a single player miss a tackle in the first half. That’s pretty impressive.

Aside from the first half dominance in the tackling department, the Steelers turned in a respectable performance overall, missing just eight tackles total, with three coming on one single play.

Let’s start with the obvious: seeing Terrell Edmunds’ name at the top of this list with double-digit misses is extremely frustrating. He’s struggling in space when it comes to missing tackles. Most of them have come down the field in coverage. However, he’s been really solid in the box, which is where he needs to play more often. He’s much more comfortable and consistent there.

Aside from Edmunds, TJ Watt missed another tackle for loss opportunity in the win, while Edmunds and Javon Hargrave missed down the field on the same play. I’ll have more on that later.

Steven Nelson missed a tackle in the second half on a Joe Mixon run near the sideline, getting trucked in the process, while Mike Hilton seemed to coast on Alex Erickson’s catch-and-run in the fourth quarter, allowing Erickson to wiggle free along the sideline for another 10 yards.

Tyler Matakevich missed a tackle on Brandon Wilson on a kickoff return in the first half, while Johnny Holton missed yet another special teams tackle, this time on a Wilson return late in the game.

Let’s check out the most egregious misses.

Edmunds’ first miss came on Tyler Boyd in the open-field after a short catch. These types of plays always give Edmunds fits because he struggles with angles and generally seems to panic and over-pursue in space, much like he does here.

Boyd does a nice job with his route running here, creating a ton of separation on Edmunds, leading to a quick throw from Ryan Finley as the pocket breaks down. Once that ball is out it’s a loss for Edmunds because his angle of pursuit is poor, allowing Boyd to jam on the breaks and slip back inside for additional yardage.

Later in the game, Edmunds – along with Watt and Hargrave – record missed tackles on a spectacular run by Mixon.

Watt has to start making these plays. As I said a few weeks ago, he’s missed a handful of TFL opportunities. This is his fourth in as many weeks, I believe.

Once Watt misses all hell breaks loose for the Steelers defense because Mixon is so darn good in these situations.

I did not give Bud Dupree a miss here because he got caught in no-man’s land trying to keep backside contain and then trying to scramble to get in position for a tackle attempt on Mixon. If you disagree, let me know below.

After that, Edmunds misses Mixon by going high, allowing Mixon to shrug him off. Hargave then misses immediately after that, again going high and letting Mixon run through that arm tackle before Devin Bush is there to wrestle him to the ground.

Pittsburgh put up a forced missed tackles performance of 9 total, meaning the Steelers won the tackles battle with a mark of +1.

Whyte Jr. made an immediate impact as a runner, forcing two missed tackles on his first carry, with both coming in a 3-yard window. His burst and lateral explosiveness was evident right away, and man was it fun to watch.

Whyte Jr. forces Darqueze Dennard and Nick Vigil to miss in that tight window, leading to a 21-yard run. His hesitation and burst upfield forces Dennard to miss. Then, his lateral explosion to his left after a head-fake to his right causes Vigil to miss, taking himself out of the play.

After that, the play everyone is talking about is the forced missed tackle I decided to highlight.

James Washington sure picked a great way to crack the forced missed tackle list on the year. Shades of Vance McDonald in Tampa Bay last season!

BW Webb has to retire now. Those are the rules.

Seriously though: what a play after the catch by the second-year receiver. He’s breaking out in a big way, folks.

Closing out the game, Snell Jr. forced two misses on one of his final runs.

I went back and forth with the first forced miss in this one, but I gave it to Snell because this is the type of tackle he’s struggled to beat in preseason and early on in his career. Coming back from knee surgery and showing this type of burst off the edge forced my hand. He absolutely eviscerated any type of angle Dennard had.

After that, Snell cut back inside on Jesse Bates III, forcing a miss to pick up a couple of extra yards, setting up a field goal for the Steelers.