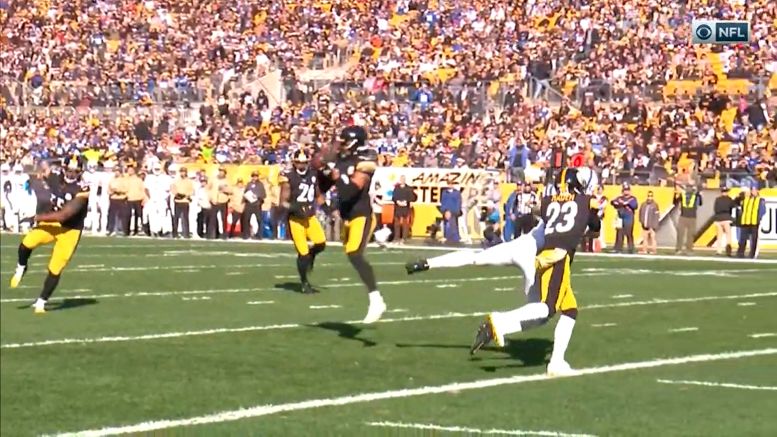 With each passing week, Kevin Colbert continues to look smarter and smarter for pulling the trigger by sending the Pittsburgh Steelers’ first-round draft pick in 2020 to the Miami Dolphins in exchange for safety Minkah Fitzpatrick, the 11th-overall pick in the 2018 NFL Draft and a safety the team has been very open about having coveted in the pre-draft process.

Fitzpatrick recorded his fourth interception of the season, and since joining the Steelers six games ago, this one finally with some return yards. His three previous interceptions allowed him a total of 20 return yards, but he brought this one back 96.

For a touchdown. It was the third-longest interception return for a touchdown in Steelers history. And his fourth interception of the season is tied for the most by anybody on the Steelers since the beginning of the 2017 season. I believe Sean Davis is the player with four, and he’s on the Reserve/Injured List. Mike Hilton also has four.

But Fitzpatrick has four in six games, including three in the past two weeks. No Steelers defender has recorded more than three interceptions in a single regular season since Troy Polamalu in 2010. That year, he totaled seven interceptions, and earned the Defensive Player of the Year Award, two years after James Harrison did.

Mike Tomlin said of Fitzpatrick after the game that he “needs no endorsement from me”, and he’s right, because his play speaks for itself. He also caused a forced fumble to give him five takeaways produced in six games.

That is not to say that he has played error-free football—I believe he was responsible for giving up the go-ahead touchdown today on fourth down in the fourth quarter, or at least he was the nearest man in coverage on a pass to the back of the end zone.

But his impact plays, particularly those that have taken the ball back, have been a huge different, a big boost in this 4-1 turnaround the team has experienced. They are 4-2 since his arrival, and realistically they could have gone 6-0 without some very untimely late turnovers in those two losses.

The Steelers have been hungry for playmakers on defense. They have gotten a few of them now, and one of the most significant was one that they had to hunt out on the trade market. They may have gotten him 18 games in his career, but here’s to him playing another hundred or so in the black and gold.