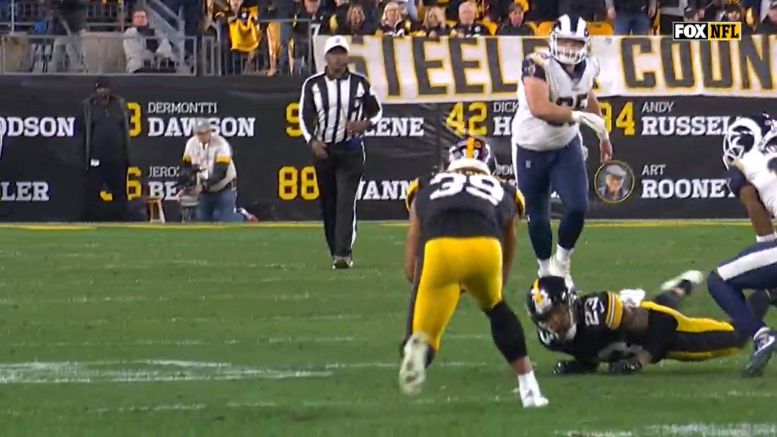 Minkah Fitzpatrick continues, week by week, to reinforce the Pittsburgh Steelers’ decision to give up a first-round pick in order to acquire him. The second-year safety sealed the team’s fourth consecutive victory just moments ago with an interception off of pass defensed by Joe Haden, who had several during the game.

Fitzpatrick himself put together another very impressive game, earlier in the first half recovering a fumble off of a Javon Hargrave strip sack that he returned for a touchdown, which proved to be the margin of victory. It matched a Dante Fowler scoop-and-score for the Los Angeles Rams to start the game.

Officially, Fitzpatrick finished the game with four tackles, a fumble recovery, an interception, and two total passes defensed. He recorded a pass breakout inside the red zone working against Cooper Kupp, who following a 200-plus-yard game was held without a catch on four targets.

For a refresher course, the Steelers elected to put in a trade offer for Fitzpatrick from the Miami Dolphins following a torn labrum injury suffered by starting free safety Sean Davis in Week Two. They decided they were willing to give up their 2020 first-round pick as part of the deal, and they also gave up fifth- and sixth-round picks over the next two years to get back fourth- and seventh-rounders.

Not only is he creating splash plays, though, he has also transformed the pass defense as a whole, as they have largely locked down the deep passing game. Entering the day, they had been allowing a passer rating of something like 10 on deep pass attempts, with three completions, no touchdowns, and three interceptions. They are the only team to have not allowed a reception of 40-plus yards since he was acquired.

And he is making game-changing plays, getting turnovers in bunches. The Steelers have 25 now as a team on the season, and he has had a hand in over a quarter of them. Obviously, this rate of productivity is not going to be sustained, but it shows the sort of player he is capable of being.

Since the bye week, in three games, Fitzpatrick has recorded four interceptions, recovered a fumble, and scored two touchdowns. He single-handedly outscored the Rams’ offense today, though the Rams’ defense outscored him, adding a safety to their fumble return score.

Minkah Fitzpatrick's 2nd INT of the game ends it. #Steelers win and are now 5-4. pic.twitter.com/1eDiLGWr4P