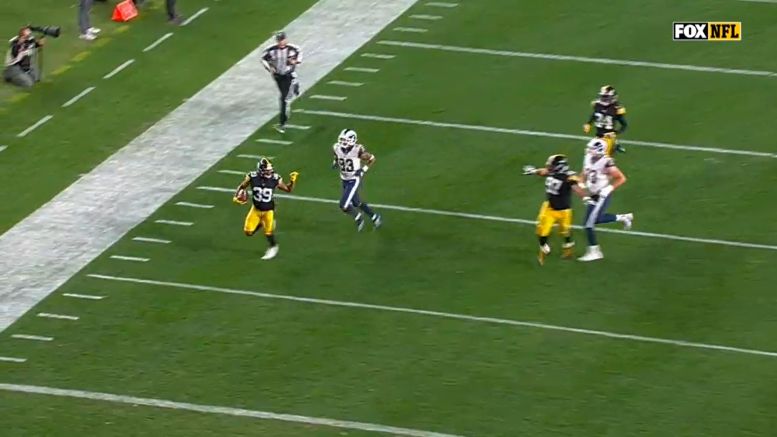 There’s no beating around the bush about this one, the Pittsburgh Steelers defense won this game tonight. The Los Angeles Rams, who had one of the most potent offenses in recent years last season, were held to just 12 points—and they got nine of those points from their defense, directly. Jared Goff and company mustered just a single field goal for their efforts, though they also had a missed attempt from 56 yards out.

While they held the Rams to 307 total yards—much of it quite late in the game—averaging just 4.4 yards per play run, the biggest difference in the game was the turnovers. The Steelers created four more takeaways to bring their season total up to 26 for the season, and three of them came from the defense, the special teams getting its second turnover in as many weeks as well.

And guess who was in the middle of it: Minkah Fitzpatrick. He had a fumble recovery off of a strip sack by Javon Hargrave that he turned into a touchdown, and then ended the game with an interception off a tipped pass by Joe Haden. Haden himself also got his first interception of the year amid an astonishing five passes defensed.

Asked about what’s behind all of the turnovers this season—approaching double of what they had for the entirety of the 2018 season—head coach Mike Tomlin said after the game, “it’s all of the above. We’ve been open about [the fact that] we need turnovers. Great defenses get themselves off the field. Great defenses stand up in the face of adversity when put on a short field. We’ve worked hard in that area”.

#LIVE: Coach Tomlin addresses the media following our win over the Rams.@budlight https://t.co/h232St8uEF

The Steelers have attacked the problem from a number of angles, including but not limited to bringing in Teryl Austin to essentially run their secondary, who has also installed mandatory drills focused on catching the ball from the defenders. They have had more drills for forcing and recovering loose balls as well. But there is one element of the equation that is paramount.

“It starts first with the acquisition of guys that are capable in that area”, Tomlin said. “Can’t say enough about Minkah, for example. I mean, really. The tear that he’s on is what it is. It needs no endorsement from me. But it’s also our approach and how we work the environmental element of our preparation. So we’ve just got to keep grinding”.

Since arriving seven games ago, Fitzptrick has intercepted five passes, forced a fumble, and recovered one, bringing two of his takeaways in for a score. T.J. Watt is another one of those capable players, recording four forced fumbles, three recoveries, and an interception, while rookie 10th-overall pick Devin Bush has two interceptions and four recoveries, including one that he returned for a score.

There’s no question that the defining, winning trait of this Steelers team in 2019 has been its ability to take away the ball, forcing at least to turnovers in eight consecutive games and winning the turnover battle each time. For the past month, it’s been translating directly into wins.