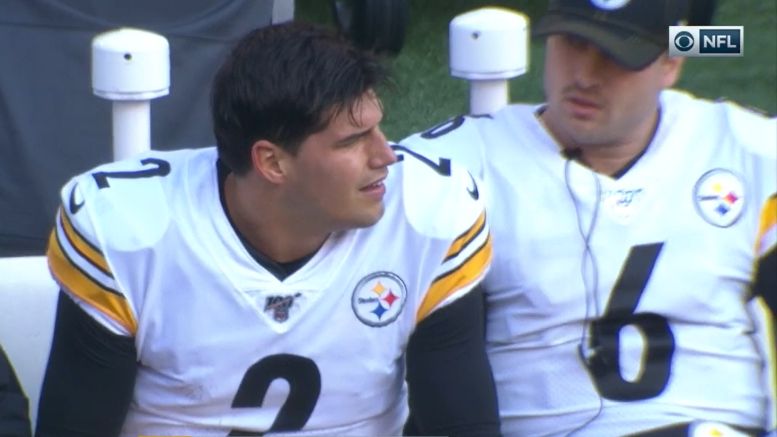 It’s no secret why Mason Rudolph is going to be sitting on the bench on Sunday. It’s because his points-to-turnovers ratio was just 2:1 by the time Mike Tomlin yanked him from the Pittsburgh Steelers’ game this past week. In six quarters of play, he had led the offense to just 10 points, while throwing five interceptions.

“He hadn’t protected the ball very recently like he did at the early portions of his participation”, Tomlin said during his pre-game press conference yesterday, during which he announced that Devlin Hodges would start against the Cincinnati Bengals. “I’ve got a lot of patience for young guys, but one thing we need to do is take care of the ball, and so that is one of the reasons why we gave Devlin an opportunity in Cincy”.

Rudolph had only thrown four interceptions—two of which were not even his fault, the result of dropped passes, on his four 220 pass attempts, up to his first of four interceptions that he threw against the Cleveland Browns. That’s a turnover rate of just 1.82, which is very respectable. That ranked pretty favorably in the NFL.

Now he’s thrown five interceptions in his last 43 attempts, which is obviously greater than 10 percent of the time. That stretch now leaves him with an interception rate of 3.4, ranking 29th in the NFL this season. He nearly doubled the frequency of interceptions for the season over just six quarters of play.

Tomlin also wanted to make it clear that the decision to sit Rudolph against the Browns had nothing to do with what happened the last time he faced them. “We’ve got enough issues of our own that we just need to focus on us”, he said.

“We respect the people that we play. We acknowledge who they are for matchup and situational purposes, for personality purposes”, he went on, “but the bottom line, particularly when you start to get to this point in the journey, they’re nameless, gray faces. It is a man-versus-himself battle, individually and collectively”.

In other words, he’s not thinking about what it means to put Rudolph back on the field with Larry Ogunjobi out there, returning from a suspension after blindsiding him with a shove that spilled him to the ground after Myles Garrett hit him in the head with his own helmet.

He’s not thinking about how Sheldon Richardson called out Rudolph, essentially saying that he got what he deserved, or how Jarvis Landry and others called for the quarterback to get suspended. The Browns feel they were the wronged party in this situation, and that the Steelers—the quarterback specifically—were not held responsible.

That, according to Tomlin, had no bearing on this decision, one made specifically and only for this game. Hodges is playing because he decided it will be in their best interests in helping them get t his win. That’s all, nothing more.