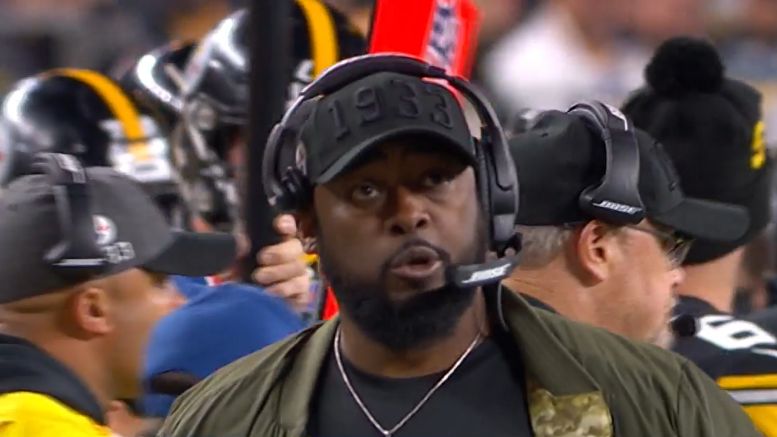 No doubt the gutsiest call of the game last night was made by Pittsburgh Steelers head coach Mike Tomlin in the fourth quarter. Nursing just a two-point, 14-12 lead with the ball on their own 34-yard line, he elected to go for it on fourth and a foot after Jaylen Samuels was stopped short on third down.

Miss it, and you give the Los Angeles Rams the ball practically in field goal range, and only trailing by two points. Make it, and you merely extend a drive not even that close to midfield on a night in which you haven’t been moving the ball and have only scored once—a while ago.

Randy Fichtner called the play, Tomlin approved it, and the offense executed it. Mason Rudolph used play action and rolled out to his right, where Trey Edmunds and Nick Vannett were both drifting open. He hit Edmunds, who got a head of steam and barreled his way north for six.

That was with 8:55 to play. They would run nine more plays before ultimately kicking a field goal, taking up a full six minutes. The Rams would still end up having two possessions after that, but fortunately the defense was able to stop them both times.

“We were just playing to win”, Tomlin said after the game about his call. “Sometimes you’ve got to take calculated risks. Sometimes it works out, like it did in that instance. I was also the guy that called the play-action pass on the minus-six and got a sack for a safety. You win some, you lose some. But when the guys are playing with that amount of urgency and energy, as coaches, we’ve got to support them, and how we support them is by being aggressive”.

It’s noteworthy that Tomlin also took responsibility for signing off on the play that resulted in Rudolph being brought down in the end zone by Aaron Donald and Clay Matthews, though it’s certainly not out of character. He has his hands in everything, as any veteran head coach would, and he’s going to absorb the blame as much as possible.

It’s also easier to do when you have a positive call to fall back on, and to do so in a win. It was a risky call and I’m not even sure if the analytics would necessarily favor it, though my hunch is that they probably would, given the distance.

It almost feels like a guy playing with house money. This season was written off long ago, but now they’ve won four straight and are even in position to pick up a wildcard spot. This was hard to imagine just a couple weeks ago. But now they have to not only play to win, but continue to win.