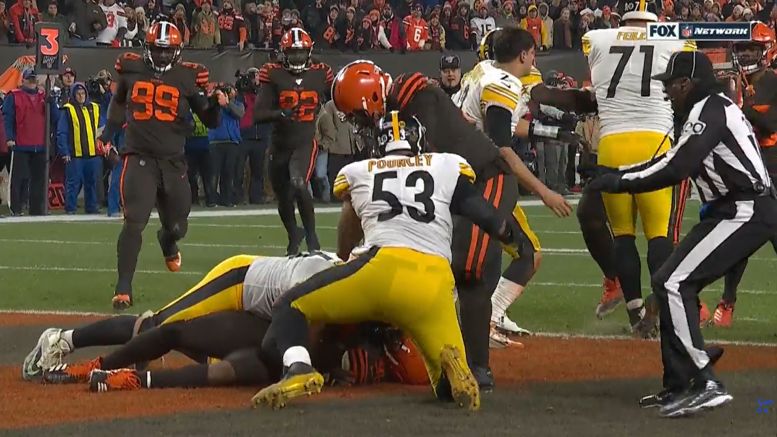 (Ed Note: After this article was written, the NFL announced Pouncey would be suspended for the next three games)

But Mason Rudolph is their guy now, and they have been working to protect him for months. They know that lately they haven’t been doing as good of a job of that as they need to. That’s on them. What Myles Garrett did? That’s on him, and that means action.

After the Cleveland Browns defensive end landed an ugly blow to Rudolph’s head, using the quarterback’s own helmet as a weapon against him, David DeCastro and Pouncey both brought Garrett to the ground. Pouncey in particular threw several punches and a kick in the process, though the kick did not land, as I recall, as another player had gotten in the way.

Garrett, Pouncey, and Browns defensive tackle Larry Ogunjobi were all ejected from the game for their roles in the melee, and it was announced that all players involved in the incident will be under review for potential further discipline.

Many believe that Pouncey will be subject to a subsequent suspension due to the fact that he threw punches and kicks. Does he care? Ask him yourself.

“I mean at this point, who cares?”, he told reporters from the locker room when asked if he expected to be suspended. “My man got hit in the head with a helmet. I’ll accept whatever penalty it is”. That is, of course, on top of the ejection, which cost him all of one snap.

On the incident itself, bringing Garrett to the ground, he said, “I blacked out. I don’t even remember, really, to be honest with you”. He said that he was “in protection mode”, defending his quarterback. And while he was doing that, Ogunjobi, another Browns lineman, shoved a helmetless Rudolph to the ground from behind.

It will be interesting to see how the league approaches this. I absolutely would not be surprised if Pouncey receives a suspension, though it wouldn’t surprise me if he doesn’t, either. My guess is that he probably will get a game, possibly even two, because of the number of blows he attempted, including a kick.

There also has to be some level of appreciation for the context in which it occurred, in the very immediate aftermath of him watching his teammate being literally assaulted with a weapon. That moment transcended any concept of sport.

Should Pouncey be suspended, B.J. Finney would have to be called upon to start in his place, and they would have to call up Patrick Morris from the practice squad, because literally the only other lineman currently on the roster who is not a starting interior lineman who is capable of playing on the inside is right tackle Matt Feiler.