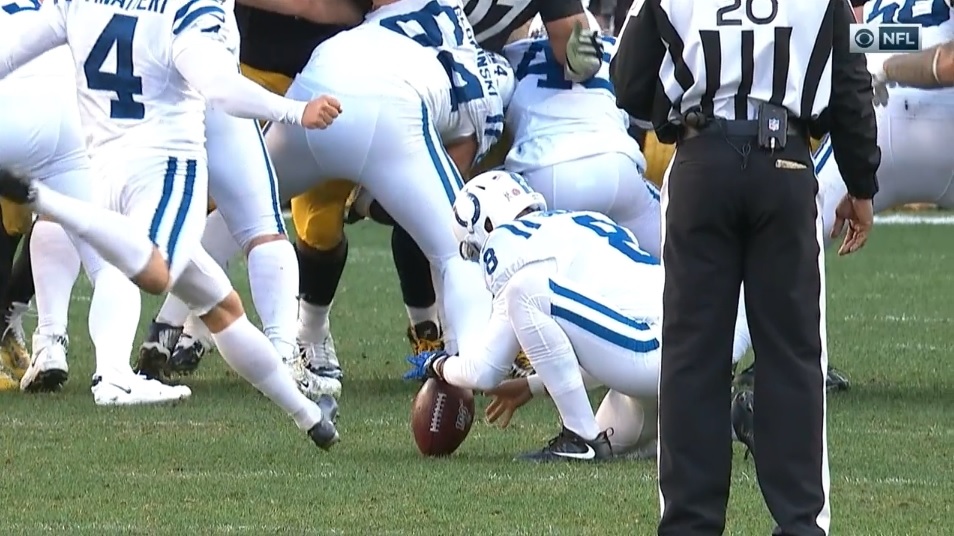 The Pittsburgh Steelers juggled with victory and defeat all afternoon but they had just enough left in the tank to record a 26-24 victory over the Indianapolis Colts. Despite two turnovers, a few controversial pass interference calls aided by a questionable challenge decision plus a 1/4 showing in the red zone, the Steelers were able to sneak out with a victory after a late field goal miss by Adam Vinatieri.

It really did not look good at first as inability to capitalize was a major problem for the Steelers offense as Mason Rudolph managed to drive into Indianapolis territory three times during the first half but was only able to come away with three points.

On the opening drive a pass intended for JuJu Smith-Schuster was dropped and intercepted by Kenny Moore. The Colts would take the ball into the red zone but the Steelers defense did enough to hold them to just three points.

On their next go, the offense put the Steelers in position to tie it up. Led by a 45-yard carry by Trey Edmunds, the Steelers found themselves near the goal line and looked to score on a carry by Jaylen Samuels. Reaching over the goal line, it seemed as if Samuels had scored but he was ruled down at the one. Mike Tomlin chose not to challenge and the Steelers were forced to kick a field goal shortly after.

The third time was not the charm for the Steelers as their inability to finish reared its ugly head once again as a failed 4th and two attempt saw them turnover the ball on downs. A shovel pass to Smith-Schuster was stopped short of the sticks.

Even without the services of Jacoby Brissett who injured his knee in the first half, the Colts offense still got to work. Former Steelers back up quarterback Brian Hoyer stepped in and found Jack Doyle for an 11-yard touchdown pass. Doyle beat rookie linebacker Devin Bush with a nifty double move to give the Colts a 10-3 lead.

Just as Hoyer targeted Doyle on his first touchdown pass, the Colts quarterback was looking for his tight end once again in the red zone but this time he found Minkah Fitzpatrick, who took the interception 96-yards the other way for a pick six. Fitzpatrick’s interception was not only the second longest interception in Steelers history but it also tied the game at 10-10.

Hoyer would answer back quickly as he managed to drive his team 75 yards into the end zone. The journeyman quarterback hooked up with Zach Pascal on a perfectly thrown ball in between Fitzpatrick and Mike Hilton to give the Colts the lead. A late field goal by Chris Boswell would make it a three-point game at half as the Colts led 16-13.

Just as Fitzpatrick’s takeaway led to direct points, the Steelers’ second takeaway would also lead to another touchdown. Bud Dupree’s strip sack, his second sack of the day, would result in Rudolph’s first touchdown of the afternoon.

Facing a third and goal, Rudolph found his trusted tight end Vance McDonald for a seven-yard touchdown pass to give the Steelers their first lead of the day.

The Steelers and Colts would trade blunders to close out the third quarter as Rudolph was stripped in his own end zone though luckily, he recovered to give the Colts a safety. On the ensuing kickoff, Colts returner Chester Rogers would fumble and Johnny Holton would fall on it. Rudolph would be unable to capitalize fully as they would settle for another field goal to give them a 23-18 lead.

Jaylen Samuels was in the midst of a record-breaking day, recording the most receptions by a Steelers running back in team history though his record-breaking reception resulted in fumble deep in his own territory. The Colts would recover and Hoyer would continue his Andrew Luck impression, throwing his third touchdown of the day, this one to Rogers to give the Colts a 24-23 lead late.

Hoyer would finish with three touchdowns and one interception while throwing for 168 yards.

Rudolph and the Steelers would march down the field but once again fall short of the endzone. A failed third and goal situation led to another Chris Boswell field goal to give them a 26-24 lead late.

The second-year quarterback did not have his worst showing as he completed 26/35 passes for 191 yards with one touchdown and an interception, though the conservatism of the offense was a major talking point.

The Colts looked like they would be able to steal this one late as the Steelers left too much time on the clock and after being aided by a controversial pass interference call on Steven Nelson, the Colts were in position for a game winning field goal but Vinatieri’s 43-yard field goal went wide left. That miss would move the Steelers to 4-4 at the midway point.

The Steelers will now welcome the Los Angeles Rams into Heinz Field next week. Kick off is set for 4:25 P.M. EST.