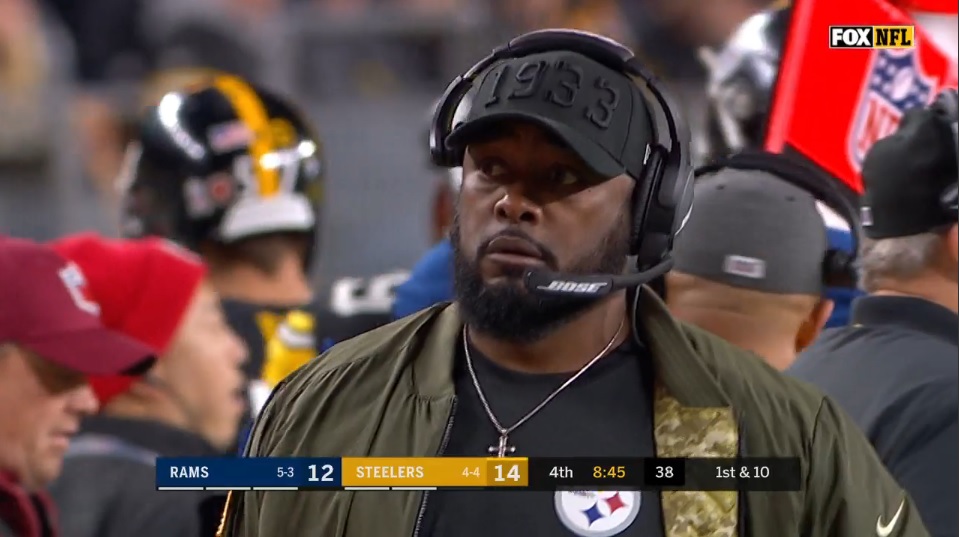 Yes, Mike Tomlin is a man who lives by his gut. Sometimes his gut is wrong. He’ll make decisions that makes you wonder if he’s ever coached a game before. And hey, the Tomlin-led Steelers were the ones who got into a 1-4 mess in the first place.

But for as much as we talk about the performance on the field, Tomlin is the straw that stirs the drink. He’s kept the team together, focused, and battling through adversity that most teams would succumb to.

In case you forgot, let’s set the scene. It’s a little less than a month ago, October 13th, and Pittsburgh’s season is on the line. They’re on the road, playing on the West Coast, a place where they almost never win, starting UDFA rookie Devlin Hodges for his first career start. They’re facing a borderline Hall of Famer in Phillip Rivers and decent Chargers’ team.

Their season should’ve been over. For most teams, they drop that one, fall to 1-5, and effectively end their season barely before it begins.

But Pittsburgh won. For most of that game, doing so in convincing fashion. That served as the catalyst into the bye, squeak past Miami, win a hard fought Indy game, and nailbiter of a win Sunday over the Los Angeles Rams.

Despite being dead in the water, this team never blinked. There was no panic, no chaos, no internal reports of in-fighting or the locker room falling apart. All characteristics that follow their head coach. The one who famously was mic’d up saying “you blink, I’ll cut your eyelids off.”

Teams in the position Pittsburgh found themselves in have two responses. Fight or flight. Either you come together and grow as a group or you divide and fall apart. The Cleveland Browns, though winning yesterday against the Bills, have largely fallen apart. Their season has been defined by drama, media spats, and a head coach seemingly in over his head. Last year, the Indianapolis Colts, led by Frank Reich, began the year 1-5 before going on a tear and making the playoffs.

Pittsburgh’s fallen into the latter group. Leadership has remained. Vets in the locker room like Cam Heyward, Ramon Foster, and Joe Haden making sure there’s no dissent or fracture. Players have stepped up, bought into the “next man up” mentality, that’s not a buzzword in Pittsburgh, that’s a mission statement, and have grown into their role. Diontae Johnson is shouldering a bigger load than anyone expected. Minkah Fitzpatrick has immediately fit into the team’s culture and provided big plays. Mason Rudolph’s been far from perfect but someone the room respects.

It’s not all been motivation speeches either. It’s been action. The Steelers’ front office has remained aggressive this season. Trading for Fitzpatrick. Acquiring Nick Vannett. Moves that had long-term value, of course, but ones that signaled to the locker room, we’re not giving up yet. Players responded in kind, fighting and clawing their way into the thick of the playoff race.

Don’t expect these good times to last forever. There will be the one-off bad game. That’s the nature of the NFL. But don’t freak out when it happens. Given what Pittsburgh’s already gotten through, there’s every reason to be confident they’ll right the ship again.

If the playoffs ended today, Pittsburgh would be the 6th seed and make the cut. If they can remain on that track for the rest of the year, it’ll be Mike Tomlin’s finest coaching performance. One that’ll make him a worthy candidate for Coach of the Year.