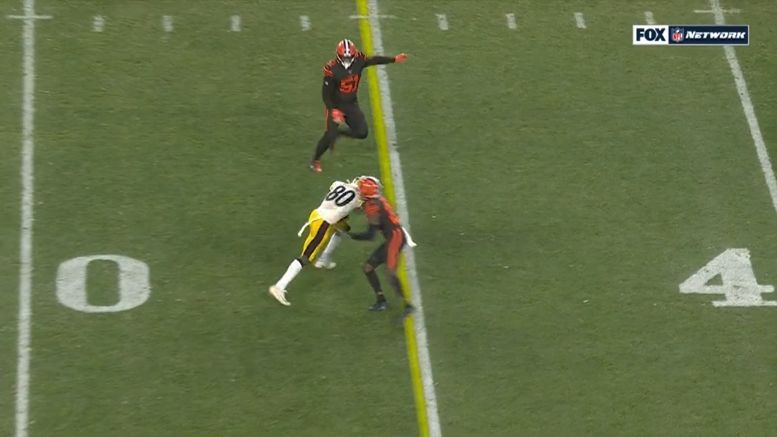 You know that things have gone batty when Johnny Holton finishes a game as your most-targeted player in the passing game. That was the case for the Pittsburgh Steelers during their loss on Thursday night to the Cleveland Browns, during which they lost both JuJu Smith-Schuster and Diontae Johnson to hits that resulted in them receiving concussions.

Prior to their leaving the game, each had been targeted four times, catching two passes for an average of about 10 yards per reception for both of them. James Washington was targeted five times, while Jaylen Samuels was targeted six times.

Both Vance McDonald and Holton saw seven official passes come their way over the course of the game. However, he also had an eighth target that drew a defensive pass interference penalty. And of those eight total targets, he caught one, though that one was an 18-yard reception on third and 15.

Holton was signed as a bargain free agent this offseason. He had spent his first three years in the league as a member of the Oakland Raiders, including every game on the 53-man roster in 2016 and 2017. However, he was on the practice squad for almost all of last season.

Holton has been on the roster for every game this year, and saw a season-high 44 snaps against the Browns, though he has seen 20 or more snaps offensively in each of the past six weeks. It should be noted that he is usually the one used in the team’s jumbo packages with Zach Banner as a tackle-eligible, which are almost always running plays.

With the Steelers down two of their top three receivers, however, it was up to Holton to step up and log a heavy amount of snaps. And Mason Rudolph kept looking his way. “I got open, pretty much, and I know Mason will be making the right reads, so I guess he was coming to me because I was open, I guess”, he told Chris Adamski of the Pittsburgh Tribune-Review after the game. “I just have to make the plays for him when it counts”.

There were multiple plays that went in his direction where it looked as though he could have made a catch, but he failed to do so. That includes the play on which he drew a pass interference penalty. He has 13 official targets this year, and has just the one reception to show for it.

But right now, he is their number two receiver until the others get back, so he’s going to need to catch some balls. “I had an opportunity to capitalize and they gave me chances out there”, he said of playing. “I’ve got to get the job done”.