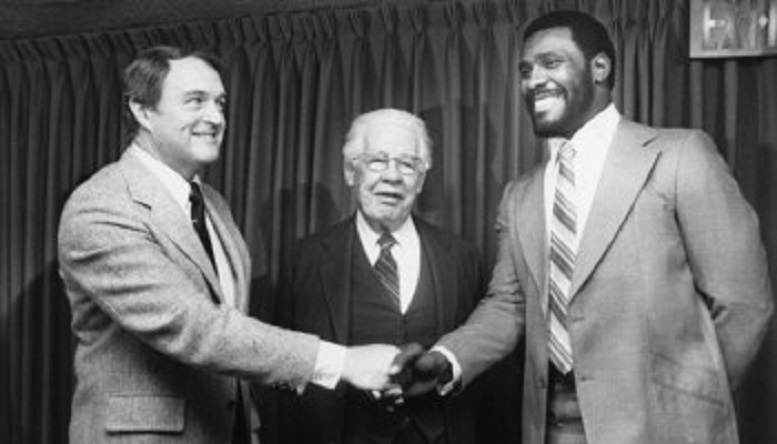 The National Football League was really hoping to make this season special. It is their 100th season, after all, an important centennial event. In many ways, the year has certainly been memorable, if nothing else, in spite of their—I would say ‘best’, but will stick simply with—efforts to put out the fires that have arisen around them at every turn.

One of the featured celebrations of their centennial they are putting together it to name an NFL 100 All-Time Team. Despite having two Hall of Fame running backs in Franco Harris and Jerome Bettis, the Pittsburgh Steelers were curiously shut out of the running back position on the list, consisting of 12 players ranging from Steve Van Buren to Emmitt Smith, the only player on the list to have played a single second in the 2000s.

The next group to be unveiled is the defensive tackles, tonight, but we already know who is on top. During yesterday’s games on Thanksgiving, the NFL Network already revealed that none other than ‘Mean’ Joe Greene will be among the 14 defensive linemen chosen to represent the league on this centennial team.

And of course he would make it, but it shouldn’t be surprising, either, that he would be the showpiece for the position. Not only was he quite arguably the greatest defensive tackle in the history of the game, and one of the very best defenders ever, period; he was also simply an icon. He even has the name: Mean Joe.

I think we all know Greene’s background and history, so we don’t have to spend too much time on that. He was the first-ever draft pick by Chuck Noll in 1969, and the pair of them, along with Dan Rooney and the scouting department, are credited with transforming the Steelers from basement-dwellers to, at least until recently, the greatest NFL dynasty of the modern era.

But he might not be alone on the list. It was also previously revealed that the great Ernie Stautner was also a member of the finalists at the defensive tackle position. It just so happens that Stautner’s 70 and Greene’s 75 are the only two jersey numbers that the Steelers, one of the flagship franchises in the NFL, have ever retired, and they’re not likely to retire any more anytime soon.

We’ll know tonight if Greene finds himself standing alone or in good company with one of the great players of the pre-dynastic era for the Steelers. He’s hoping for the latter.